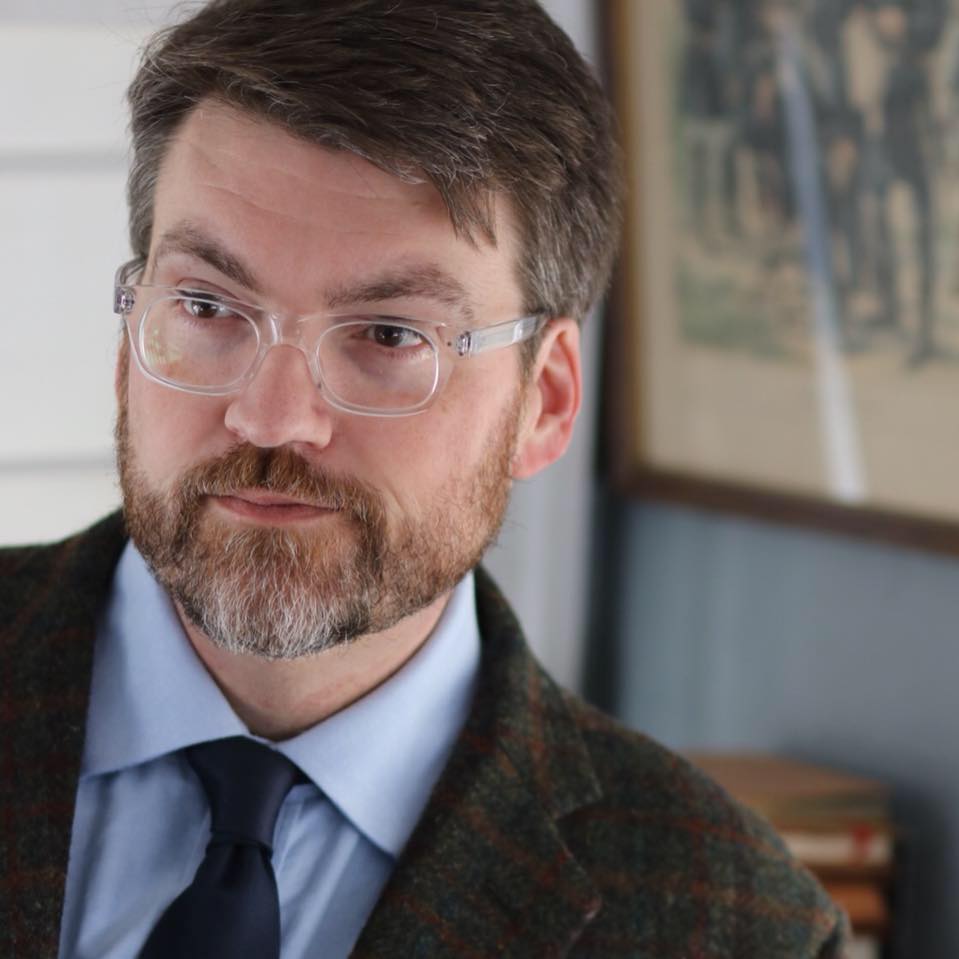 I recently got the opportunity to talk with J. Mark Bertrand about Bible design and the Bible Design Blog. To say that Mark and his blog have been influential in current Bible design and construction is an understatement. In this interview, Mark discusses what he’s been up to and what Bibles he’s currently using. I’ve linked to Mark’s site as well as a few places to purchase the Bibles he’s discussing. A few include affiliate links to help keep this site running.

For that person who’s never read a Bible review, introduce yourself to our readers.

My name is J. Mark Bertrand. I’m a novelist. I’ve written a non-fiction theology title, too. For the past several years, I have been a Christian minister, a teaching elder in the Presbyterian Church in America. But the thing a lot of people know me for is actually a blog I started years ago named Bible Design Blog, where I write about the way Bibles are designed, printed, and bound—everything to do with the physical form of the Good Book.

I started Bible Design Blog without a plan. This was a subject I happened to be interested in thanks to my background in typography and love of Scripture, and no one was writing about it. At the time, we seemed to have entered the twilight years of the printed book. The design of Bibles had largely gone stagnant and quality was in a tailspin. I wanted to see some kind of revival of interest, and so I started writing.

Over the past few years, I’ve been approached with ideas to collaborate on all sorts of Bible-related projects. I did a lot of pre-production work on a podcast, too, but I let ambition get the better of me and embarked on concept I didn’t have the skill and resources to do well—but that’s another story.

As I thought about my ideal edition, I needed a name for the project, and that was Lectio. But publishing is a fickle business. Plans are made, but not always realized. The project never came to fruition but I decided to keep the name. So in my mind, Lectio is the umbrella for everything I aspire to do in this field, and the blog is part of that.

You’ve been one of the most prominent writers about reader’s editions. Which is your favorite and why?

The good news is that we now have reader-friendly Bibles available in a number of major translations. There are single-volume editions, and in some cases multi-volume editions, too. Whether this is a fleeting trend or the new normal, I don’t know, but for now at least, you really can’t go wrong.

The one I use the most is the ESV Reader’s Bible. R. L. Allan did a limited run mating these book blocks with a brown goatskin binding, and I liked it so much I bought one (which is something I haven’t done in a while). Crossway’s six-volume Reader’s Bible is right up there for me, too. And I love everything about Bibliotheca.

Are Bibles finally being designed the way you envisioned?

Yes and no. Compared to the way things were in the mid-1990s, when I first started paying attention to Bible publishing, this is a Golden Age. Back then, it seemed like most of the design choices were made by default: paragraphed text was relatively new, everything was set in double-columns, and whatever innovation was going on seemed focused on improving your ability to do reference work, not to read. Then paper quality took a nose dive, glued bindings became the norm, and ‘genuine leather’ was considered the premium option. For a bibliophile, the times were dark, and most of the interest was in discovering vintage editions from before the decline.

By every conceivable measure but one, things are back on track. The one exception has to do not with design but paper. At antique stores or used booksellers, you can still pick up a cheap New Testament from sixty years ago, and the paper is astonishingly opaque, putting the best of our contemporary sheets to shame. Otherwise, I have a lot less to complain about that I used to!

Naturally, I have my own preferences about what an ideal edition would look like, so there are some things I have envisioned that aren’t yet a reality. But if you had told me at the beginning we would see days like this, I wouldn’t have thought it possible.

Which Bibles do you think get design right?

I’ve already mentioned Crossway’s work on reader-friendly editions. They found the sweet spot for an accessible but relatively ‘pure’ approach to the idea, and now it’s been widely imitated (which is a good thing). For die-hard typophiles, I don’t think anything compares to Bibliotheca, where every detail gives the sense of having been pondered. One of the things I like about these examples is how timeless they are. While they are very much of the moment, they might just as easily have been mid-century publishing projects. We also have trendier editions that could only have come about now, and while they don’t appeal to me as much, their existence bodes well for the sustainability of this niche.

In terms of more traditional-looking Bibles, I appreciate the work 2/K Denmark has been doing with Schuyler, creating some apparently conservative layouts like the Quentel line that still quietly innovate. I love the fact that so many publishers seem to be working with 2/K now. Again, it bodes well for the future.

What changes would you like to see in Bible design?

Someone needs to figure out how to make paper the way they used to. The great design work being done these days deserves paper like that to really shine.

What Bibles do you use the most? Do you use a different Bible for different purposes, or do you prefer to use one Bible for everything?

Actually, both. I use the Cambridge Clarion for pretty much everything. It’s a single column reference Bible that goes far enough down the reader-friendly path to represent a happy medium, and the footprint is small enough to work for me in terms of both travel and not taking up too much of my valuable pulpit real estate. My brown calfskin Clarion has been beaten up pretty good, and has the first generation paper that loves to curl up at the edges, but I’m no spring chicken myself. We make a good team.

And yet, I also have a stack of other Bibles I use with regularity. In my office, there’s a row of metal barrister bookcases, with one shelf dedicated to ‘working editions.’ On that shelf the order is as follows: Crossway’s six-volume Reader’s Bible (usually with a copy of the Book of Church Order wedged on top), Bibliotheca (playing topside host to the hardback Westminster Standards and a New Testament translated from Aramaic), and then a vertical stack including, from bottom to top, the Heirloom Legacy ESV in brown and green, the R. L. Allan binding of the ESV Reader’s Bible, the NIV Spirit of the Reformation Study Bible, an Allan-bound ESV Study Bible in brown goatskin, and a green goatskin Schuyler Personal-Size Quentel. This pile keeps changing order as I pull things out—and I don’t quite know why I have multiple copies of the same volume, and there’s no real logic to the organization. There are a bunch of others on additional shelves, but these are the ones I tend to grab first.

If you could build a Bible from various components of other Bibles (paper from one, typeface from another, etc.), what components would you use from which Bibles? What would your Bible look like?

This is the question I had to answer when I started working on the Lectio project, and I don’t want to give the game away. You never know when someone with a budget may come along and say, “Let’s make this happen.” But if I could wave a wand, I’d do a variation on a modern reader’s edition printed on vintage paper with a range of bindings inspired by things you see outside the world of Bible publishing.

Are there any Bibles that you’re looking forward to?

Yes, but I’m not supposed to talk about them. I will say that what gets me excited has changed a lot over the years. Most of what’s published really doesn’t, and never has. My sweet spot has always been that intersection of great design and quality manufacture. Within that space, pretty much everything makes me happy right now.

There was a time when I’d get bent out of shape over new releases that didn’t quite get the details right. My fear was that their failure would discourage other publishers from trying to do better. This wasn’t entirely irrational: I’d heard a lot of people in publishing explain why single column editions, or reader-friendly ones, or multi-volume ones wouldn’t succeed in the market because of [insert flawed example here]. But in spite of that, we eventually made it—and I have to give Crossway a lot of credit here, because I think where a lot of publishers would have pulled back after a mixed result, they kept improving, kept taking chances, kept doing interesting and unusual editions, and it’s had a knock-on effect. It changed things. Now my hope is that things will stay changed, and keep getting better.

Let’s talk about your other projects. You write fiction as well as non-fiction. Tell us about your books and anything you might have coming soon.

So, my three crime novels are called Back on Murder, Pattern of Wounds, and Nothing to Hide. The form a series starring the same protagonist and the same humid, gritty Houston setting. My theology title is called Rethinking Worldview, and it’s based on the teaching I’ve been doing for nearly two decades now with Worldview Academy, an academic summer camp for high school students where we cover theology, worldview, and apologetics.

A lot of my time these days goes into a small Presbyterian church I helped to start here in South Dakota. I always tell people to drop by and visit next time they’re in Sioux Falls, and believe it or not, that does happen from time to time.

I want to end this article by saying I appreciate the work that Mark has done in Bible publishing. If it wasn’t for Mark raising the issues of bad Bible design and construction, we would still be in that tailspin. Mark has been an amazing influence on Bible publishing and that influence has affected all of us. Also, thank you Mark for this interview!

Don’t forget to check out his books and website. 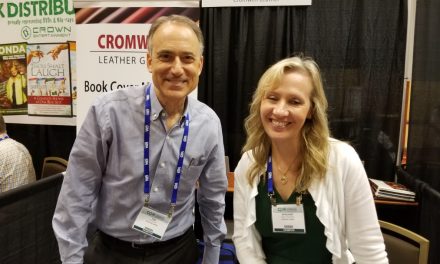 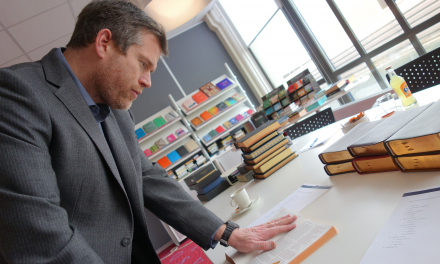 Interview with Sky Cline on the Upcoming Schuyler Treveris