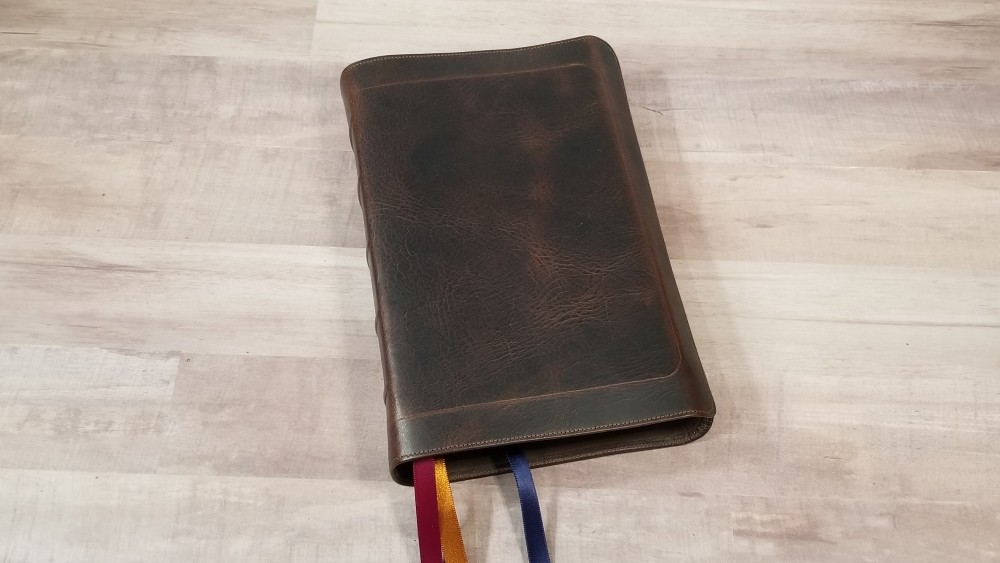 AE Bibles recently contacted me to ask if I was interested in sending them a Bible to rebind in exchange for an honest review. One look at their website and I was hooked. I was allowed to choose anything I wanted. If you know me, you know I can’t make a decision (especially about Bibles), so after a few weeks of scrolling through their site, I finally decided on my Bible. I sent them my goatskin Cambridge KJV Clarion and made these selections:

Here’s how it turned out… 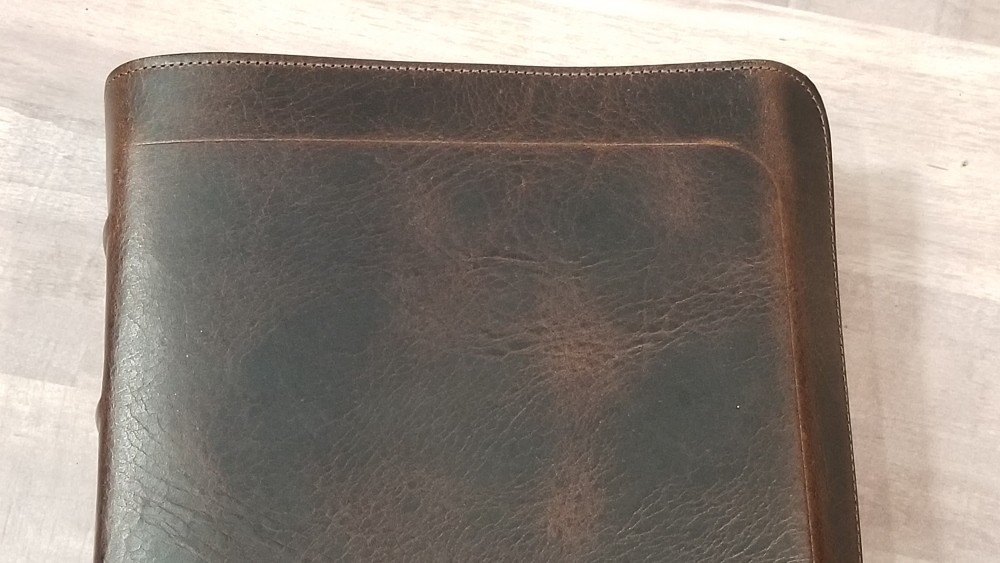 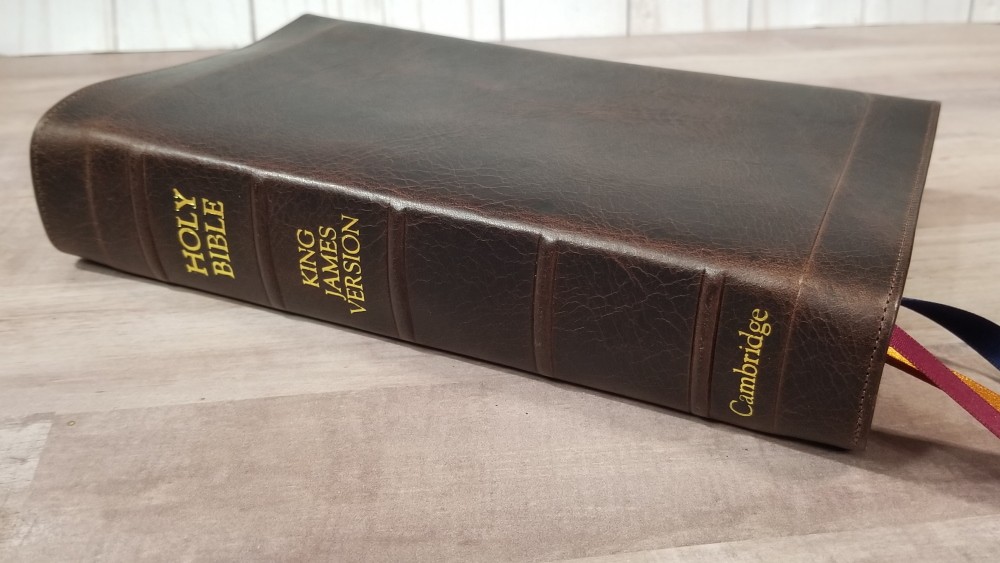 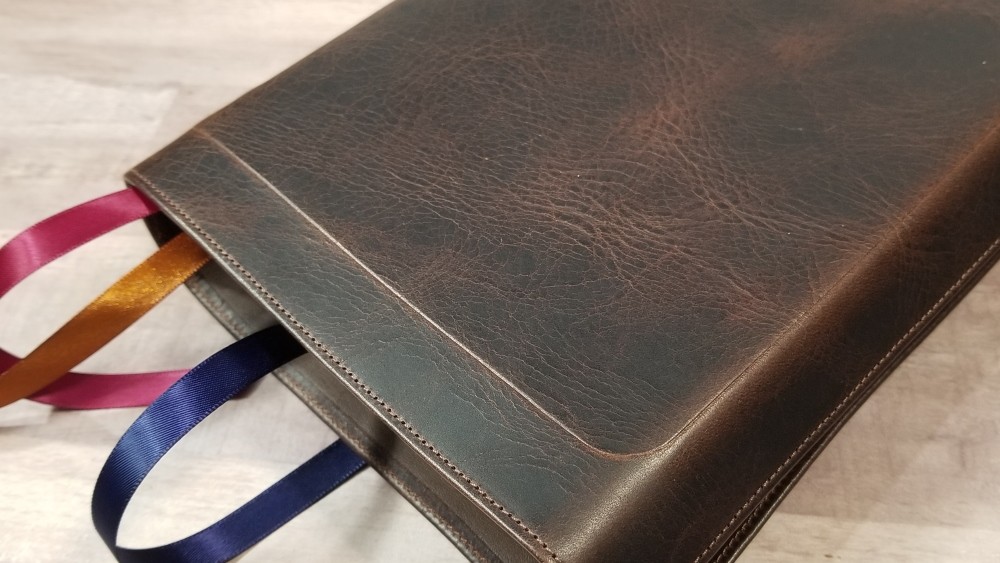 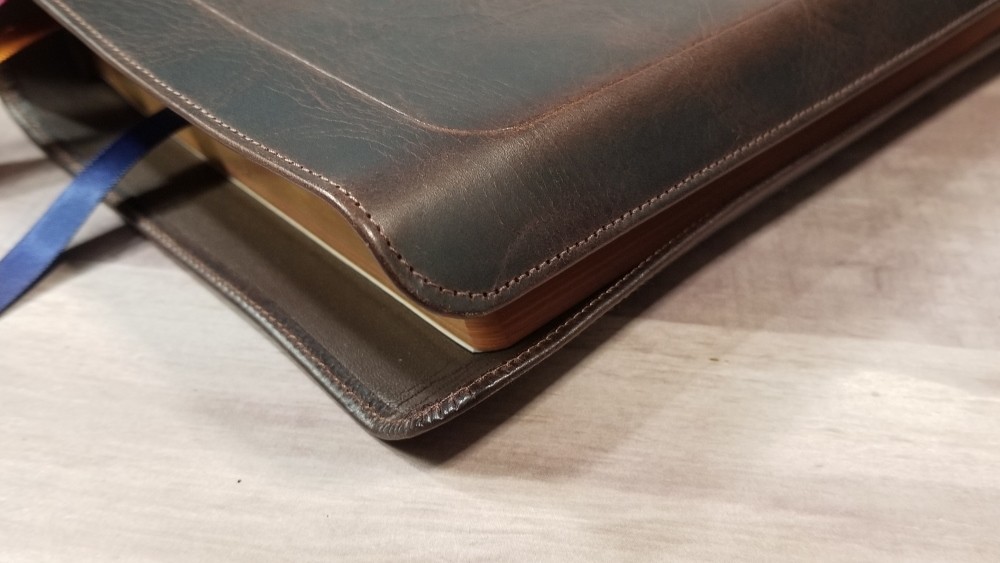 The leather I chose is dark brown Badalassi Cardo calfskin, It has a smooth grain with a rippled texture that you can see and feel. I also chose a full yapp, because I wanted to see if it would make the Clarion feel a little more balanced in the hand, and it absolutely does. I also chose perimeter stitching and an etched line around the perimeter. The spine includes 5 raised hubs, tooling, and the text printed in gold. It has a rugged feel to it and It’s slightly stiff (which is exactly what I wanted). It doesn’t scratch easily, but one unique quality of this leather is that scratches can be rubbed out. I would choose this leather again without hesitation. 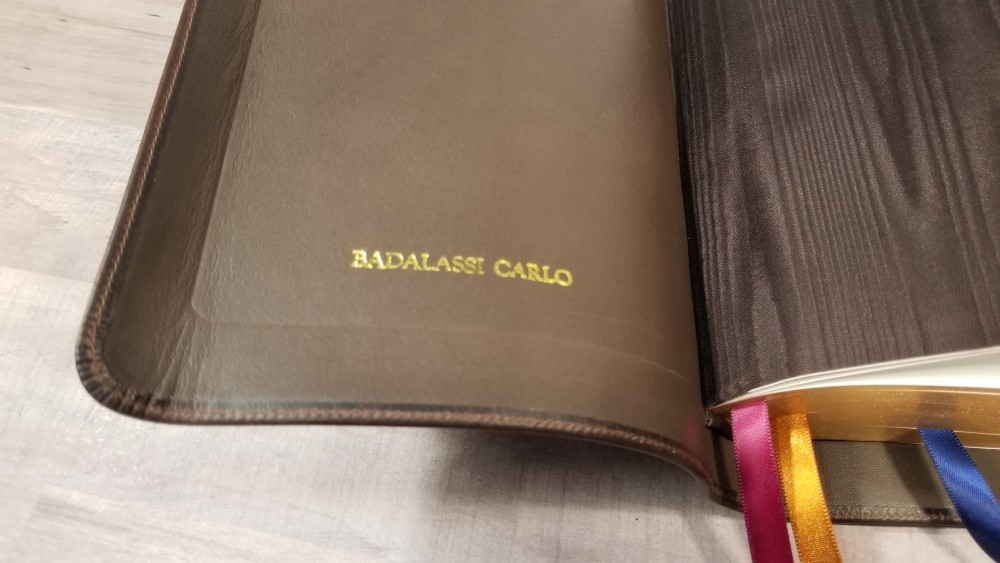 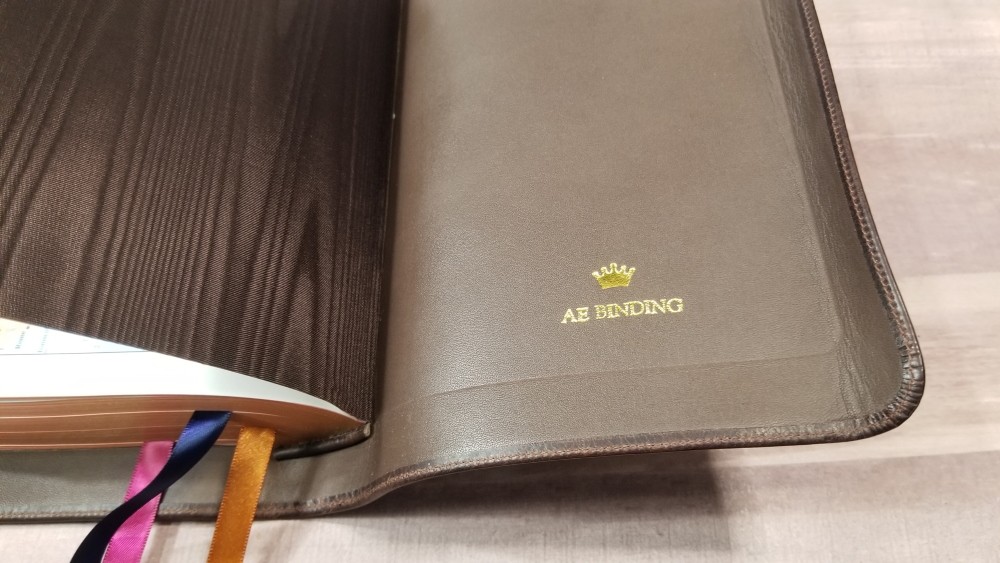 For the liner, I went with a dark brown lambskin. It’s soft to the touch and looks and feels elegant. I might add a gold line next time, but this looks amazing and fits this Bible perfectly. The edge-lined tab isn’t overly stiff, but it will need to be broken in a little bit. It does stay open in Genesis. I had the leather name printed in the front and AE Bibles’ name printed in the back. 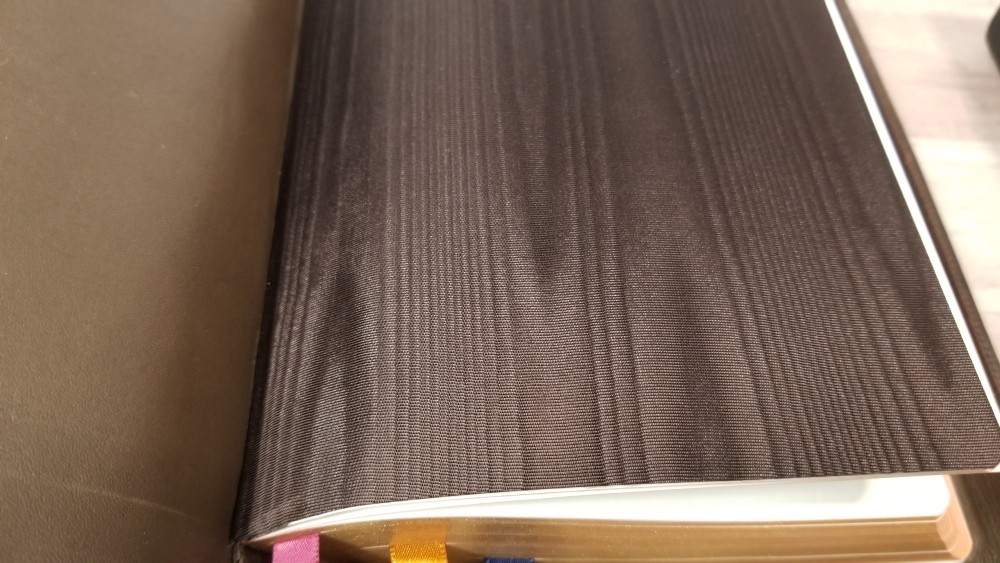 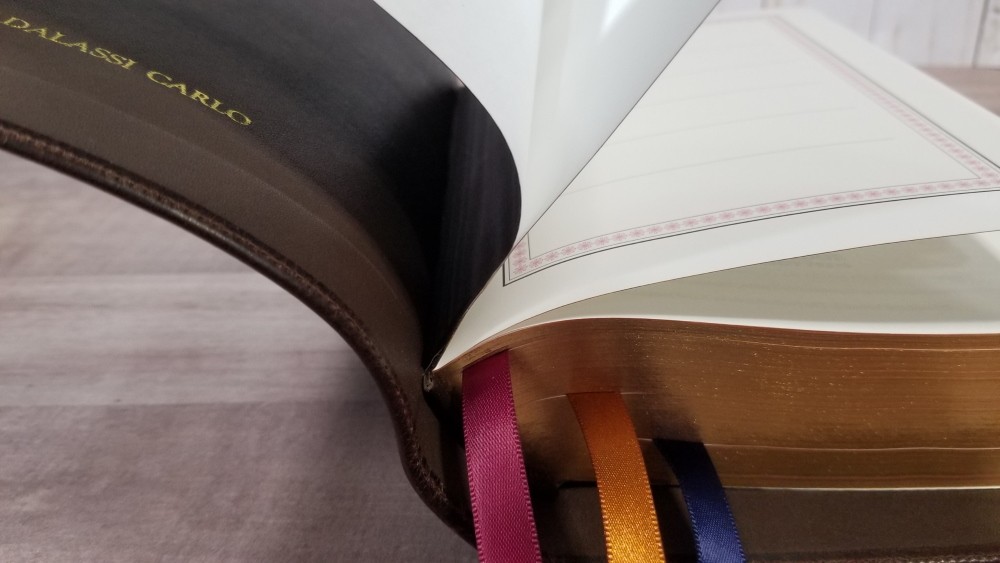 For the end sheet, I went with brown Silk Moire. It has a fabric textured feel. Other than that it works exactly like any end sheet. It’s glued to the tab at just over an inch. 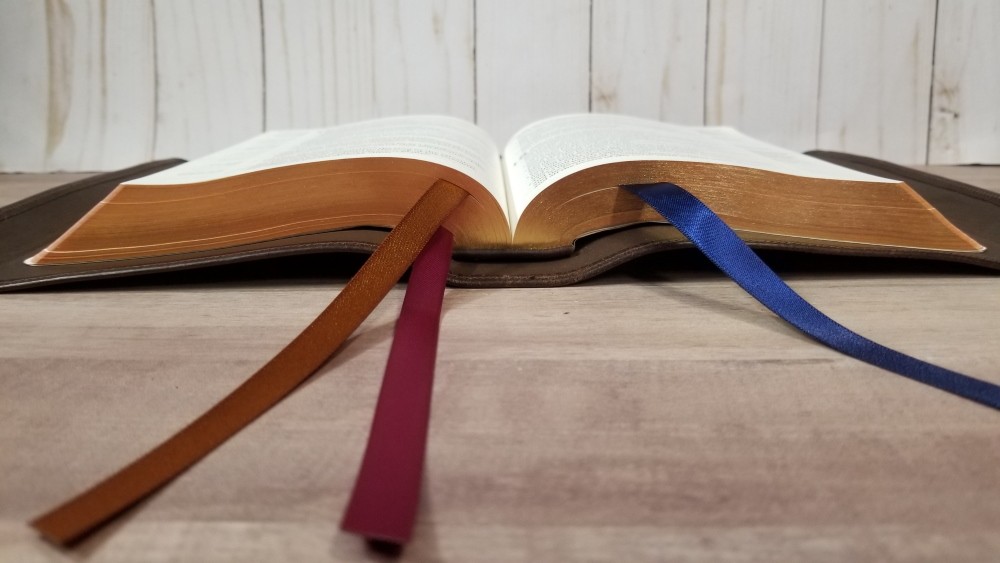 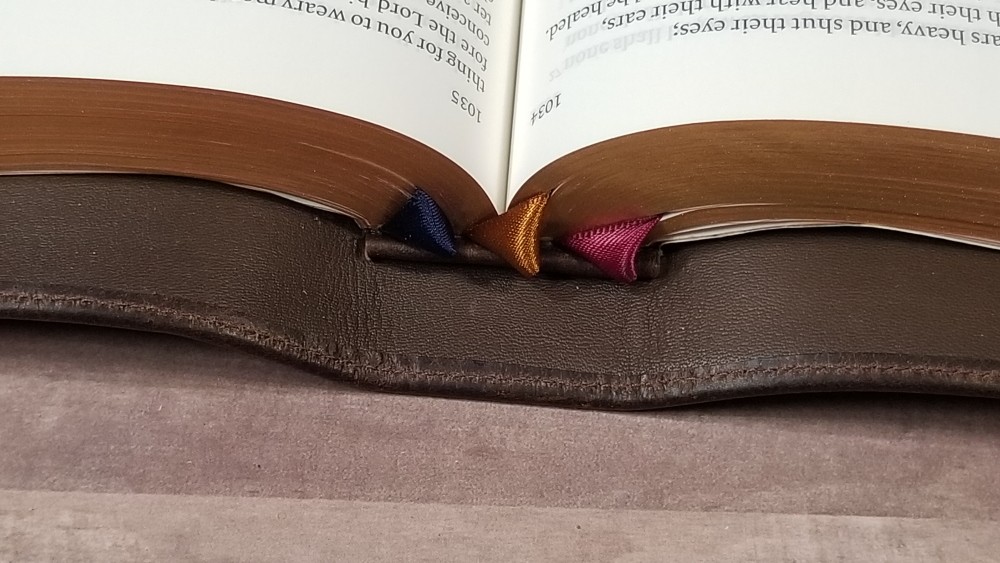 I chose three ribbons: burgundy, copper, and navy blue. They’re 10mm wide Berisford’s ribbons. Three ribbons seem to work the best from this size of a Bible. I completely love these colors. 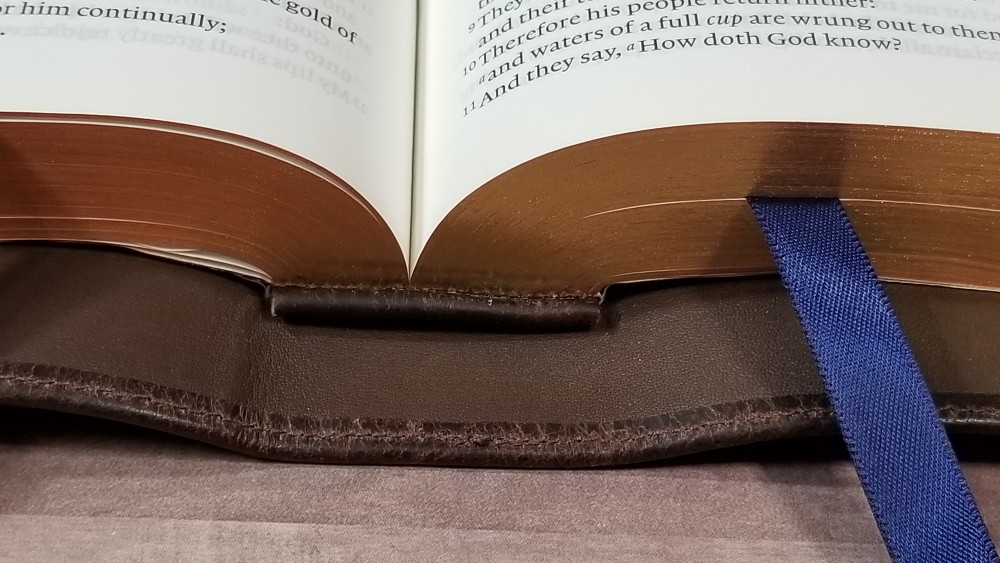 I chose leather head/tail bands. Leather is an unusual material for head/tail bands, but it sounded interesting. They’re usually made with two different colors of thread or a single strip of fabric. The leather gives the same shape of the thread with the single color of the leather. It doesn’t stand out like thread would, so it doesn’t draw attention to itself. This gives it a natural and rugged look. 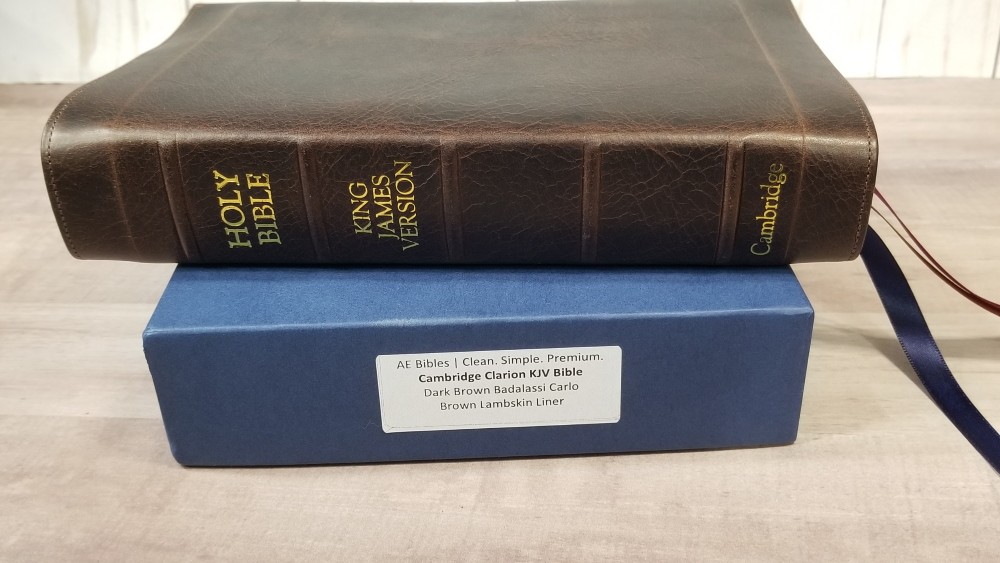 My Bible came back to me in a gift box with a label showing exactly what’s inside. I like to carry my Bibles in their boxes, so I very much appreciate having a gift box. The box is larger than the Bible, so there is some space left over inside, but the Clarion isn’t a standard size Bible so this is understandable.

Here’s how the new leather compares to the brown calfskin Clarion, the goatskin Clarion, and the Treveris in marbled mahogany calfskin. 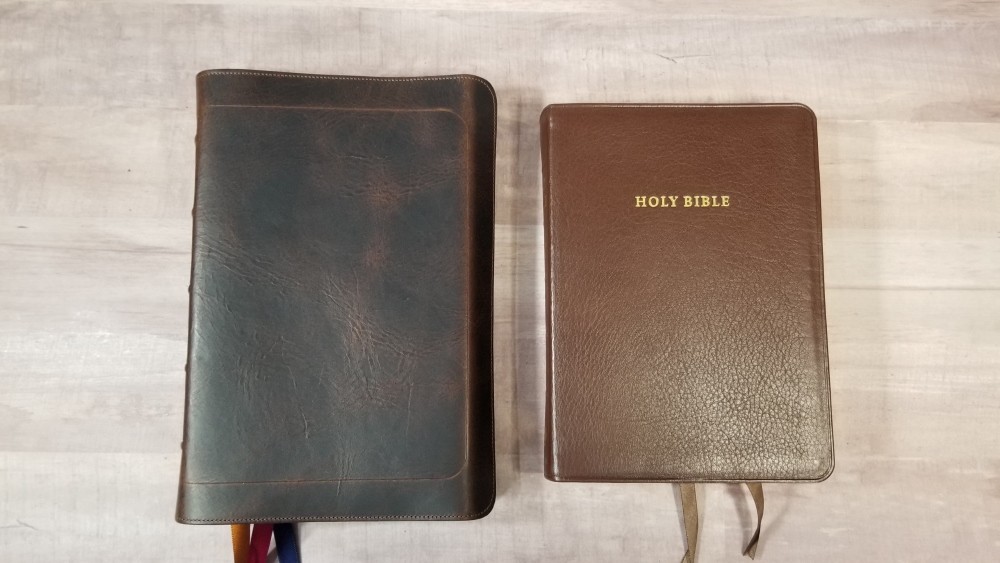 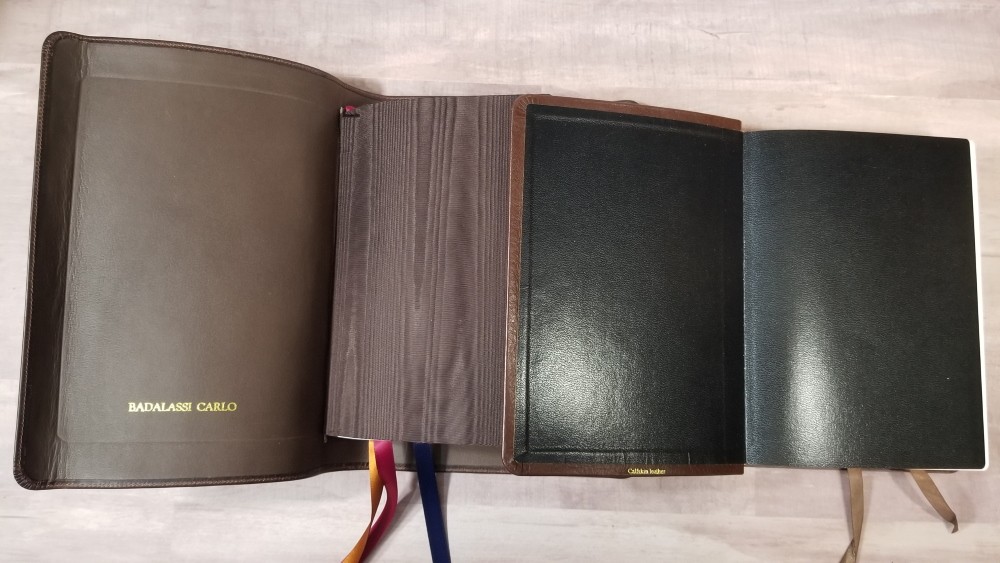 The standard brown calfskin on the Cambridge Clarion is smooth but has a touch of grain and it’s soft. It has a tooled line around the edge of the perimeter. It has a paste-down liner. This leather is much thinner and stiffer. 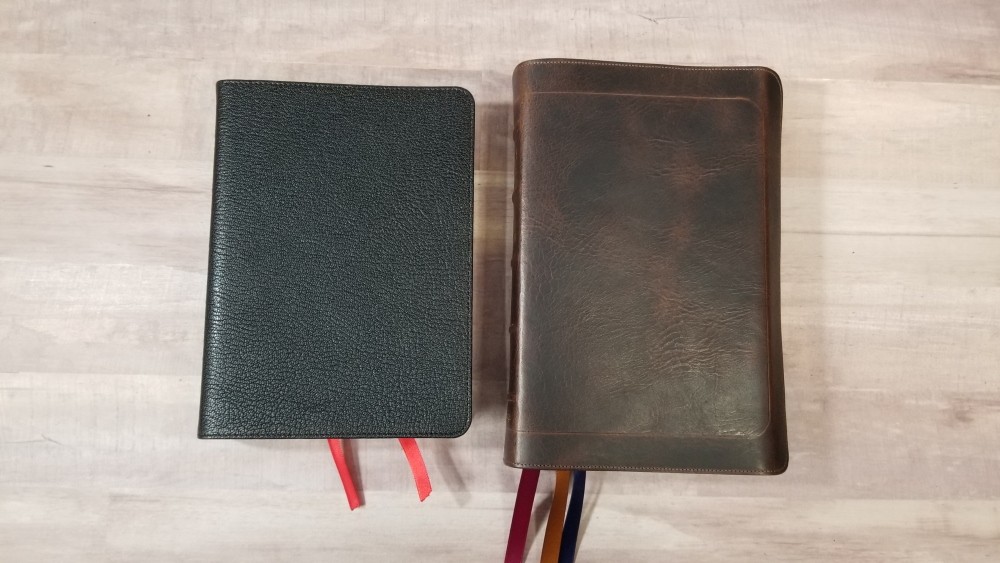 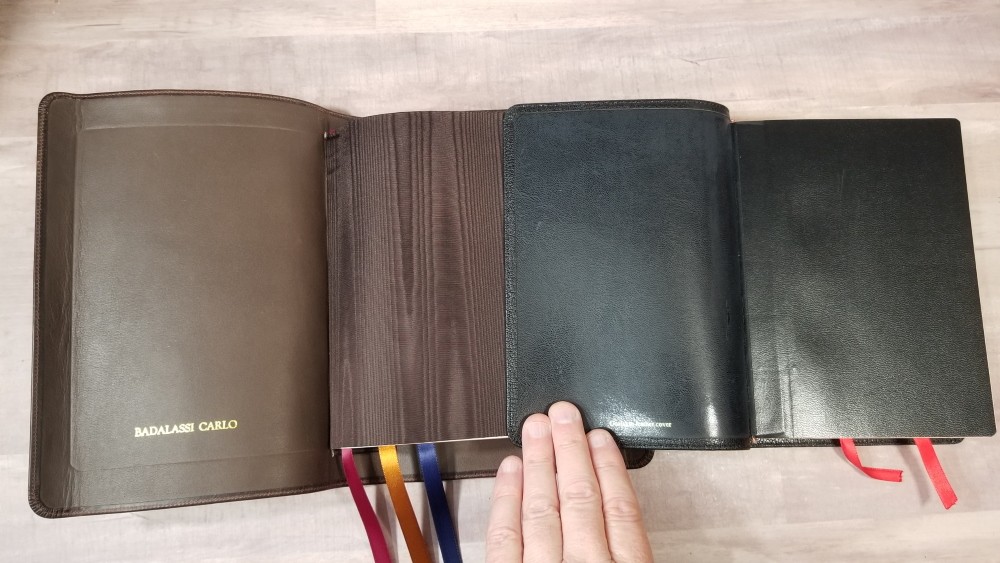 The goatskin is more flexible and has a more pronounced grain. It’s solid black, so there’s no color variation. The spine hubs are indicated with tooling. It has almost no overhang, so the page edges aren’t protected. The liner is edge-lined synthetic. It’s also perimeter-stitched with tight stitching. The end-sheet is vinyl-coated paper. 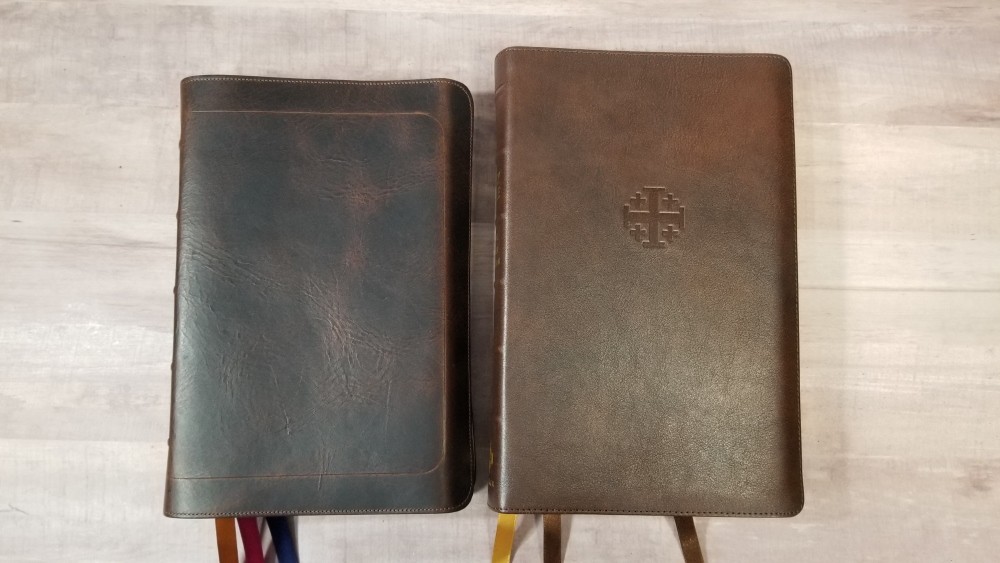 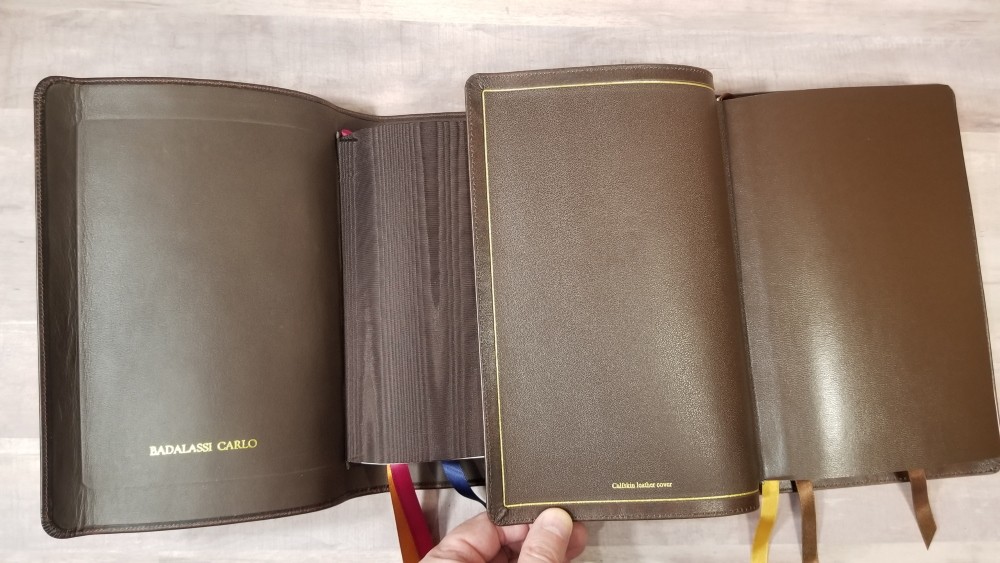 The Treveris in edge-lined marbled mahogany calfskin has a slightly smoother grain. It does have color variation, but no variation in the grain. The perimeter stitching is tight but not as tight as the AE Bibles. It doesn’t include a tooled line around the perimeter or around the raised hubs. The hubs are the same size. It’s more flexible. The yapp is smaller. The liner has more grain but isn’t as soft. The overlap for the front cover is larger and the corner work isn’t as elegant. The end-sheet is vinyl-coated paper. The gilt-line gives it a more finished look. I’ll consider adding this the next time. The ribbons seem to be the same- just shorter (but more than long enough). 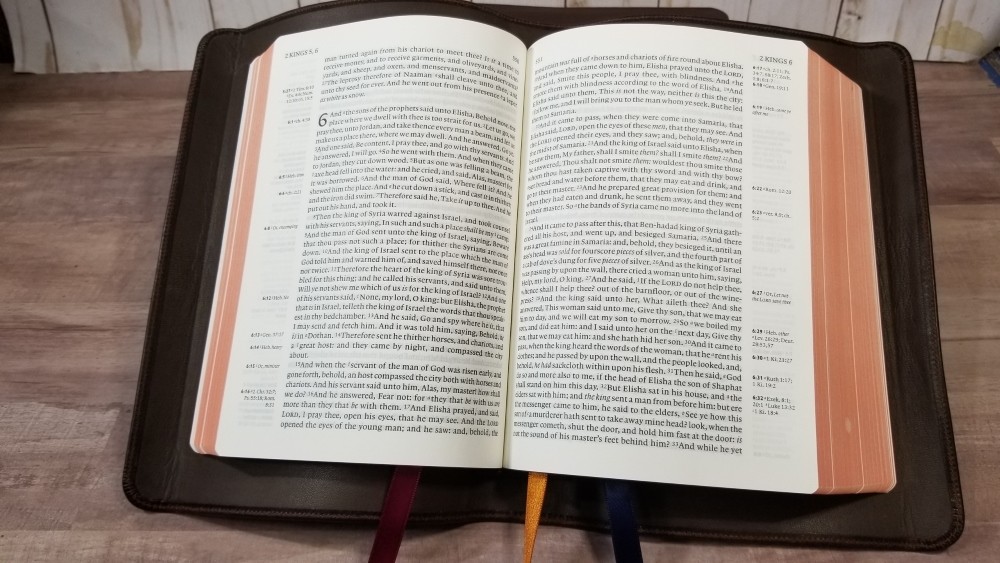 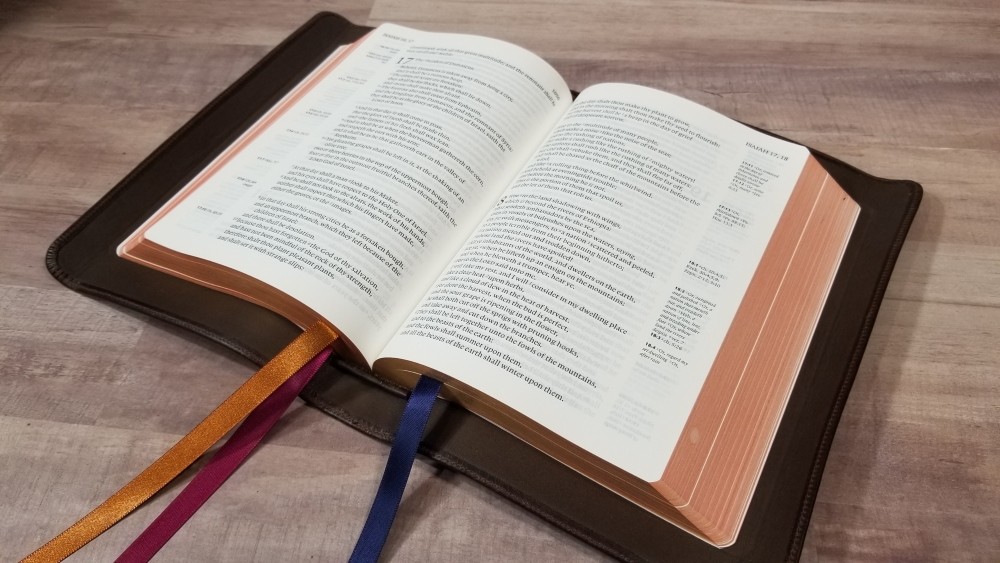 I love this rebind from AE Bibles. It’s better than I expected. It looks amazing and has a rugged feel. I can take it anywhere and I don’t feel the need to baby it. My Clarion is now easier to hold and use and it feels more balanced in my hand. Tilting it toward me to read is much easier and more natural than the goatskin was. The spine is much tighter than the Cambridge calfskin. The text block came back in the exact condition that I sent it.

I love being able to choose every element of the rebind. It is expensive and it does take a while to get it back, but if you’re a fan of quality leather and getting exactly what you want, then take a look at the AE Bibles website to design your Bible rebind.

AE Bibles rebound my Bible in exchange for an honest review. I was not asked to provide a positive review. 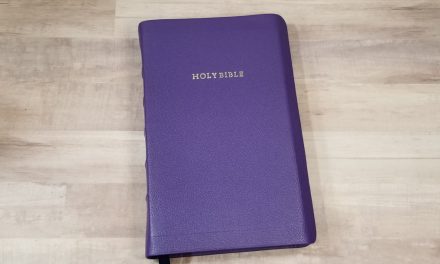 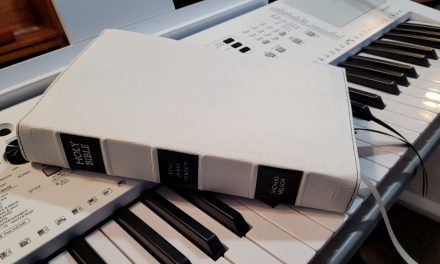 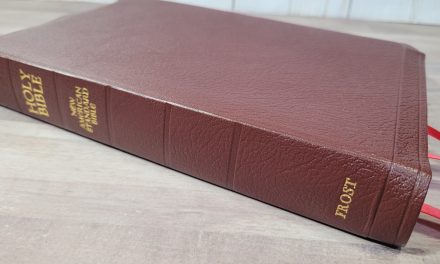