There are not many single-column paragraph KJV’s on the market. When a new one comes along I take notice. I long for a layout that sets the text in a pretty layout. That’s something the KJV almost never gets. It doesn’t have to have section headings, references, or even verse numbers. Recently I’ve wanted a paragraph KJV without verse numbers. I don’t always want markings that slow down readability and comprehension. Local Church Bible Publishers’ latest Bible is a single-column paragraph in large print with no verse numbers. It costs $57. Let’s take a look. 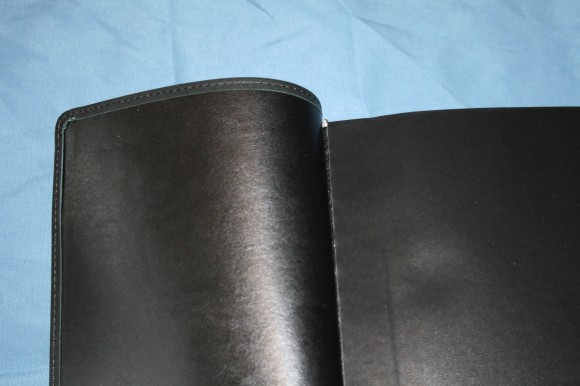 The cover is edge-lined black ironed calfskin. It has a nice grain and it feels soft to the touch. It has a polyurethane liner and is stitched around the perimeter. The hinge for the edge-lining is stiffer than any LCBP that I’ve seen. Most are not stiff at all, but this one is so stiff that it won’t stay open in Genesis. I’m sure this will break in with use, but I’m not sure how much. I’ll give an update in a few weeks or months. The binding is sewn. 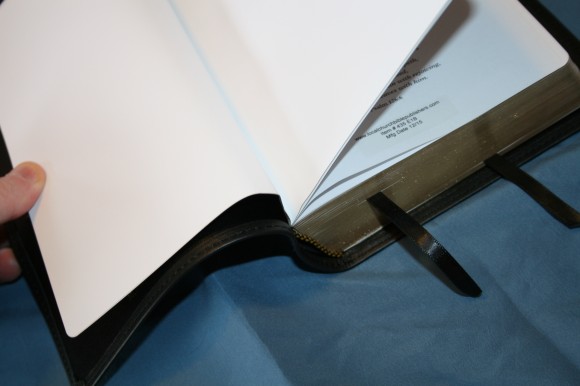 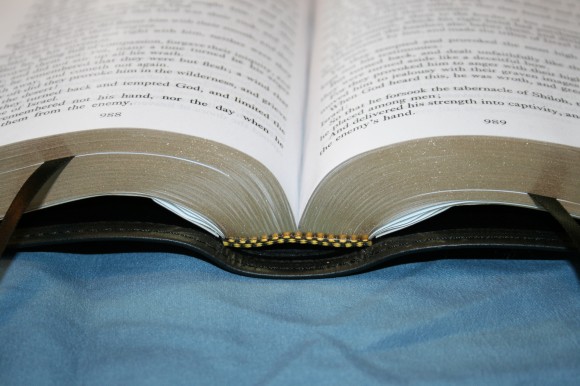 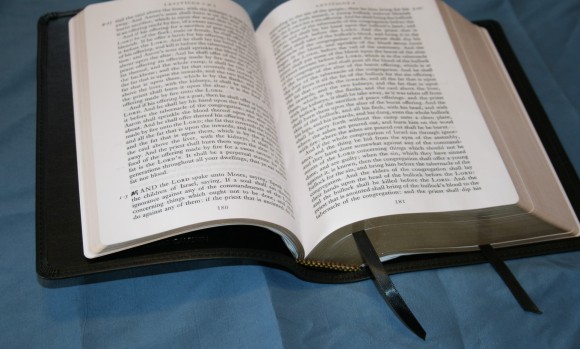 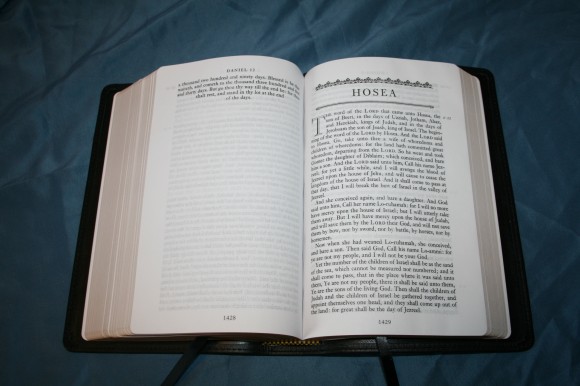 The paper is in the low to mid 30’s in gsm. It has more show-through than any Bible I’ve seen from LCBP. That’s not to say it’s bad. It’s probably still average or better. It does have a glare when sitting under a lamp. It’s not that bad but it is noticeable. There isn’t any glare if you don’t have direct lighting on the pages. There are 30 pages in the back for notes. 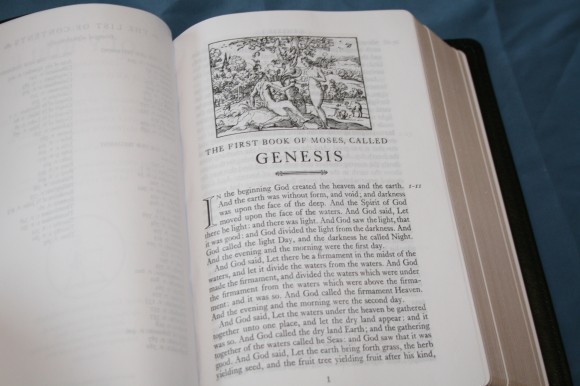 This is a single column paragraph setting. It has a lot of unique features. First, there are no verse numbers within the text. The first verse of every chapter has verse numbers in the margin. The start of a new chapter is marked with an interesting leafy symbol at the beginning of the first verse. One detail that I found interesting is the last few lines of a book tapers off, meaning there are fewer and fewer words per line at the end of a book and the lines are centered. 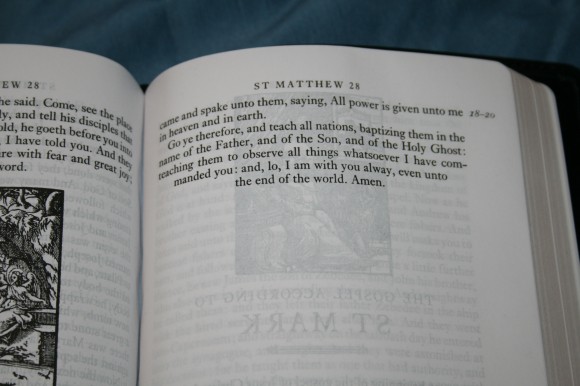 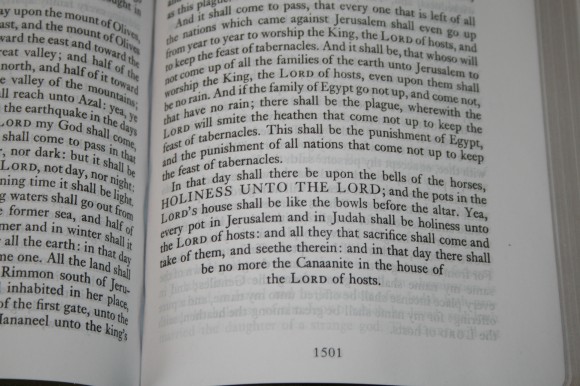 The typeface is sharp and bold. It has an 11-point font, making this a large print edition. The font is dark and consistent throughout. It doesn’t have italics for supplied words. This makes the text more readable, but it also takes away one of the advantages of the KJV text. It also doesn’t have pronunciation marks of any kind. The first chapter of each book has a drop-cap that takes 4 lines. The text is line-matched. 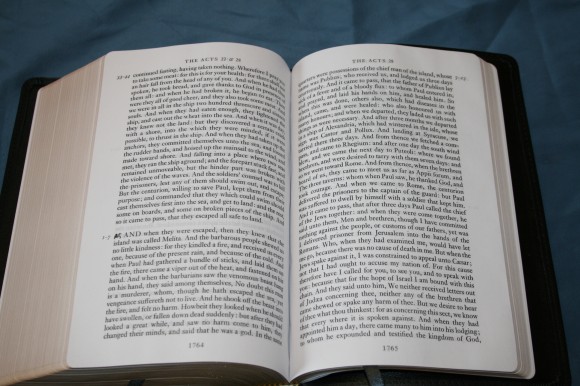 It has 60 characters across and the column is 4”. The spacing is about perfect. The words never feel too close and there are no awkward spaces. It’s easy to read from one line to another without losing my place. It also doesn’t overdo it with hyphens. Genesis 1 has 5 hyphens.

The paragraphs are too large for my tastes. They follow the tradition pilcrow placement (chapter markers) found in traditional KJV printing. The problem with this is there aren’t any paragraph markers from Acts 21 on. Starting at Acts 21, every chapter is a full paragraph (Revelation 1:4 has a paragraph). This does away with the advantage of paragraphs. For the rest of the text it has a mix of medium to very long paragraphs. Some even span two full pages. 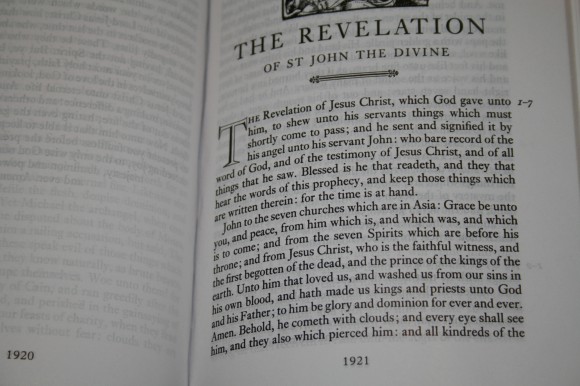 I prefer lots of short paragraphs. Smaller paragraphs could be counter-productive in some places because they could break up the context. Keeping passages in context is the purpose of paragraphs in the first place. Still, there are lots of places where shorter paragraphs would have worked. For example, the introductions to the epistles should be their own paragraph.

Psalms is missing the chapter titles. Some think these are inspired and others do not. I personally would have included them. It seems odd that they’re not included, but then the endings for the epistles (like those found in Cambridge Bibles), which are not considered inspired, are included. I like these book endings and I’m glad they’re included, but if it’s one or the other I prefer the Psalms chapter titles. I think both should be included. Psalms has a pilcrow next to the chapter number. 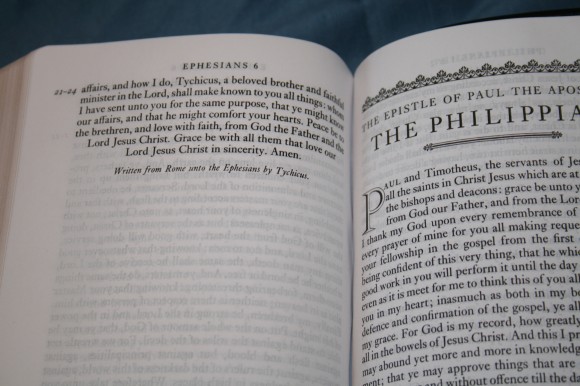 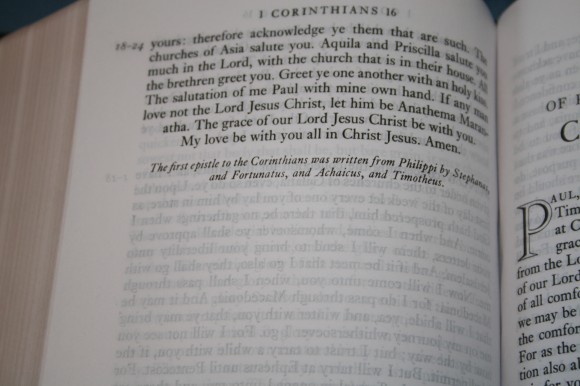 The Hebrew alphabet in Psalms 119 has been removed. Some Bibles have the actual Hebrew letters, but practically every Bible at least has the English equivalent (Aleph, Beth, etc.). I suspect they were removed because they hold to the KJV over the Hebrew. The problem is this does away with the acrostic poetry of the chapter. I would like to not only see them added back to this acrostic, but also to the other acrostic Psalms that are almost always ignored (Crossway has added them in their book of Psalms). Regardless of your stance on the King’s English vs the Hebrew, the Psalms were written in Hebrew as an acrostic and the acrostic doesn’t come across in English. It would be nice to see them included and to pay homage to the original languages. 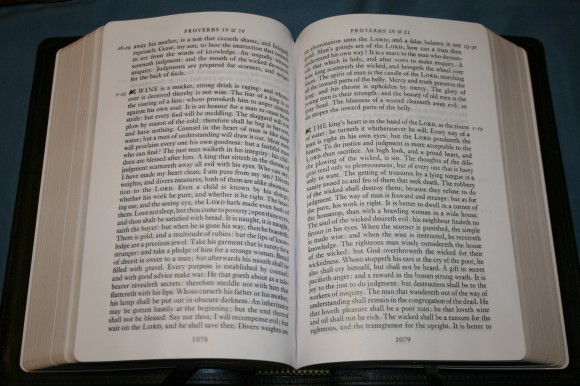 Rather than follow the tradition of pilcrow placement and leaving most of the New Testament with full chapter paragraphs, I would rather see a true paragraph layout. As it is, it doesn’t take advantage of paragraphs. They had the opportunity to create the prettiest KJV on the market. Instead it’s just readable.

I am a visual person. I love images and art. I am a fan of artwork in Bibles. I especially like artwork that doesn’t take up too much space or get in the way. There are several types of artwork in this Bible. 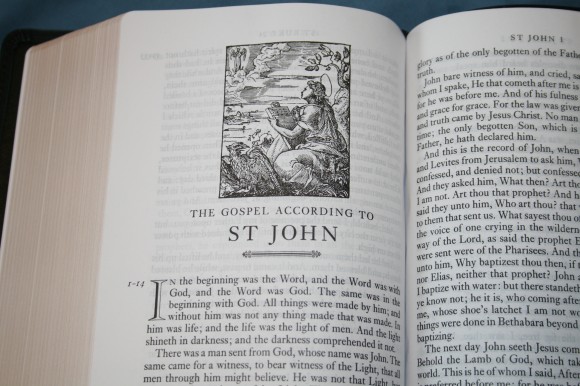 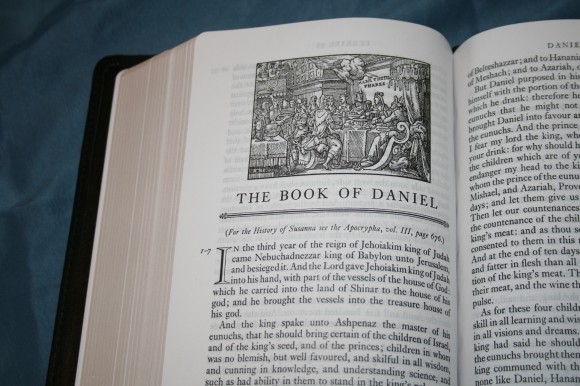 One type is old line drawings. These are placed throughout the Bible and correspond to the text. For example, in Genesis 6 is a drawing of Noah’s Ark. They are very detailed and well-drawn. I like them a lot and I’d like to see more Bibles include artwork. With all of the nice artwork that I’ve seen in Bibles I can imagine there will be plenty of people wanting to color them. 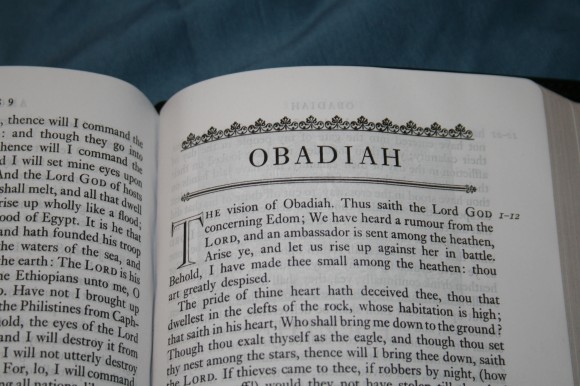 Another type is decorations around book names. Those that don’t have drawings have the decorations.

Another type is the drop-cap. These are the first letter of the first word of the book. The letters are not filled in, which I suspect will also get the coloring treatment.

All of these add elegance that reminds me of Bibles from a hundred or so years ago.

Out of the box it’s a great reader. I find the font to be perfect. I especially like reading it while it lays in my lap. Holding it in one hand is a little difficult due to the flexibility of the cover and it being a little slippery. I like to tilt my Bibles toward me instead of looking down at it.

I plan to add a few things for my own use. I want to write the verse numbers in the margin on every line where a verse starts. This way I can scan down the margin and look for the verse I want and then read that line. If I have issues figuring out where verses start then I’ll place a small dot next to the first word of the verse. This will still keep the text clean and make it more useful for preaching and teaching.

If I Could Change One Thing

I want to see smaller paragraphs. This would break the text up into smaller thoughts and make it easier to find my place on the page. This would include Proverbs which should reduce it closer to a verse by verse. This would make them much easier to read and use and makes more sense because of their writing structure.

The two most obvious Bible to compare it with are the Cambridge KJV Clarion and Crossway’s ESV Reader’s Bible. Both are single-column paragraph. The Clarion has an 8.5 font, references, dictionary, maps, and smaller paragraphs. It also sets poetry in stanzas, creating the prettiest KJV layout available (although it missed a few layout opportunities too, such as poetry in the New Testament). The ESV Reader’s Bible doesn’t have any verse numbers and it has the chapter numbers moved to the margins. Verse numbers are given in the header. Verse numbers and chapter numbers are in red. 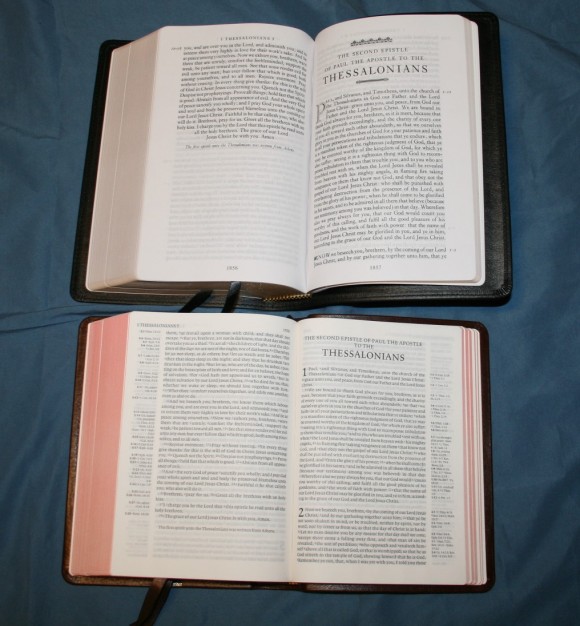 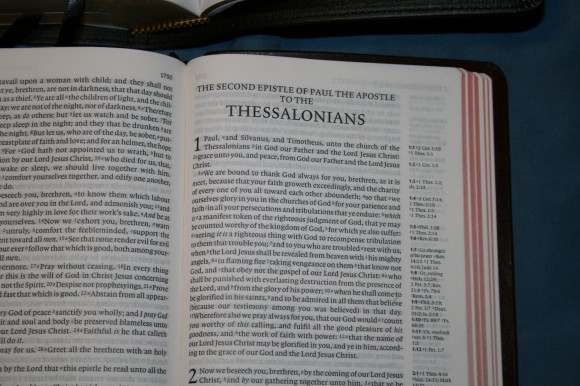 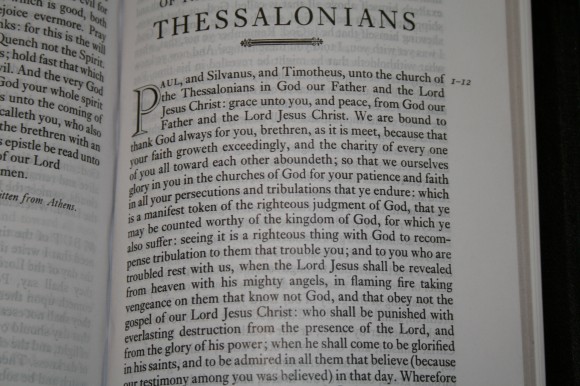 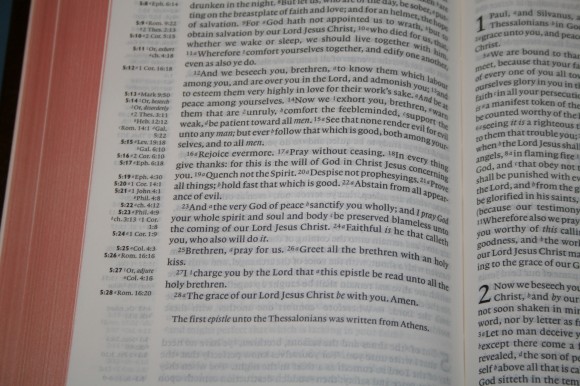 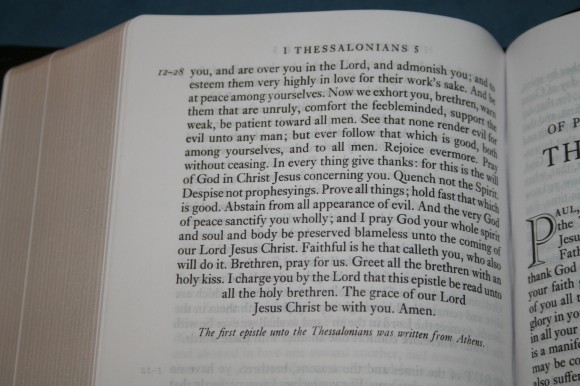 Even though I would like smaller paragraphs, this is still an excellent Bible for reading without distractions. My complaints are minor compared to how readable this Bible is. I plan to use the LCBP Paragraph Bible for reading, as I prefer a clean text with no distractions. I might even try using it for teaching, and preaching. 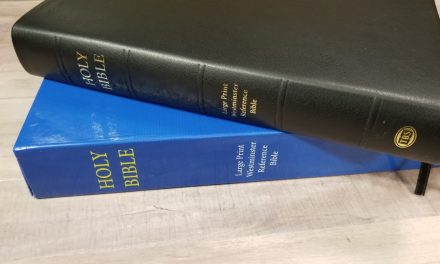 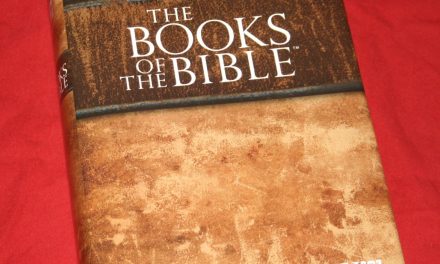 The Books of the Bible NIV – Review 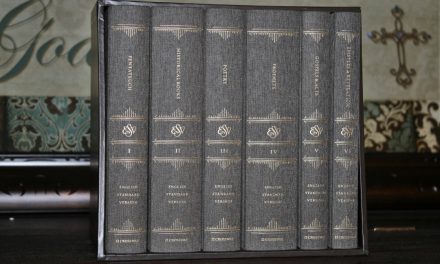