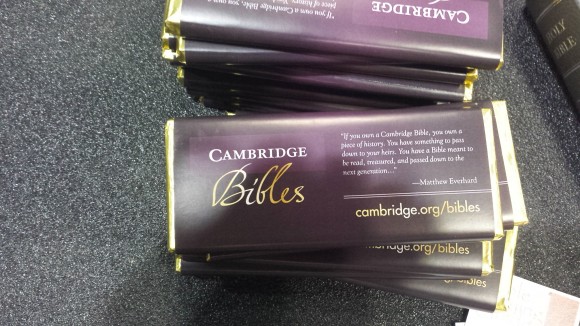 Today I interviewed the Cambridge team – all of which were highly knowledgeable in their field and a joy to talk to. We talked for almost 2 hours and could have kept going but we had Jongbloed waiting (my apologies to the folks at Jongbloed for going over on the time and making them wait).

Chris Wright is very intelligent about Bible design and production. It’s amazing what changing the size of a Bible by 5% does to production. Everything from wasted paper to increased cost of, well, everything. It’s an intricate balance between size, weight, and cost. And then when the market size for each design is taken into account, it’s no wonder there are several Bibles that are the same size and yet still have their own following and space in the market without competing with their own editions. I learned a ton about Bible design and production. We have the same vision for the future of Bible design. They are taking digital publishing seriously and fully intend on focusing on what you need the most in a printed Bible.

I had a detailed discussion with Marcus Hinds about social media and marketing. BBG will be making some additions to social media strategy based on recommendations from Marcus. I really enjoyed Marcus’ enthusiasm about Cambridge Bibles and their relationship with the blogging world. 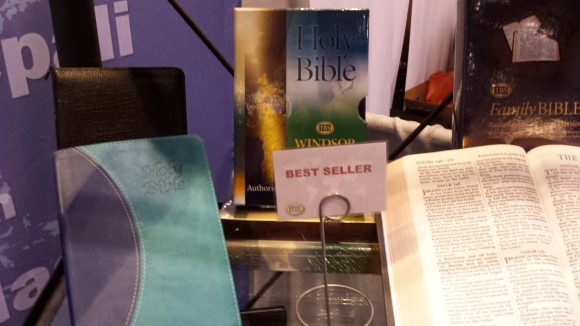 I also had an amazing conversation with Paul Roland of TBS and his crew. I enjoyed hearing his thoughts Bible design and production. Both TBS and Cambridge have similar visions for the future of Bible design. You can tell he has a passion for the printed Word of God. He’s also taking digital publishing seriously. Paul is a very gracious person and he would have stood there and talked to me all day. He and his team gave me some parting gifts. I’ll show them in the future. 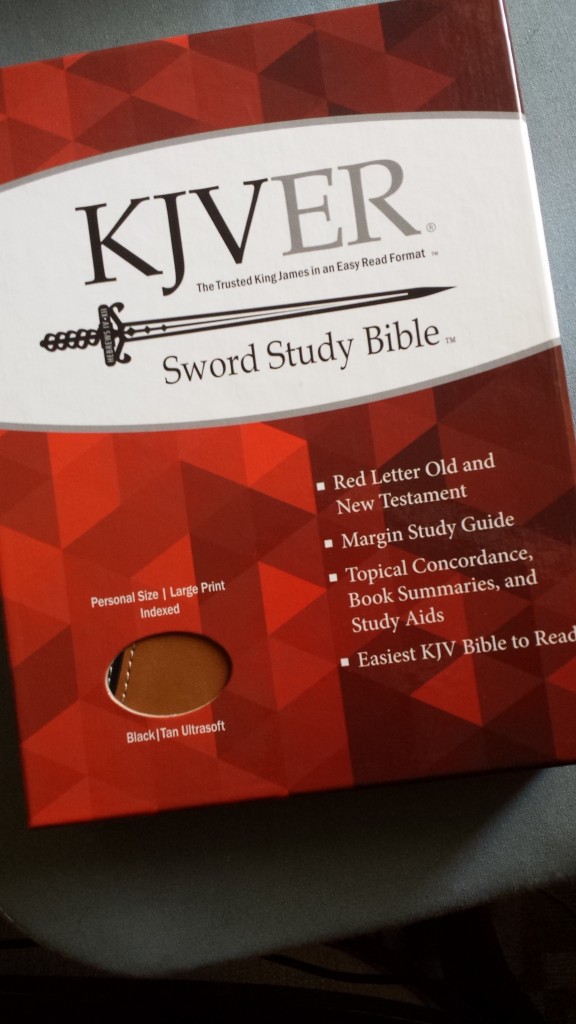 Yesterday I talked to the rep for Whitaker House. He gave me a pre-release copy of the KJVER Sword Study Bible. I spent the night and this morning with it. I totally love it! It’s red-letter in the Old Testament (I’ve always wondered why they didn’t do this), large print personal size, nice large font with generous leading, opaque paper, and has topical chain studies. You can even submit your own chains to be considered for future editions. It has articles in the back about how to interpret Scripture, creation (Henry Morris, Ken Ham, etc.), and several others. It has a concordance/dictionary combo.

My wife attended the press conference and talked to Bob Whitaker (the President) and Cathy Hickling (head of press relations). They were very enthusiastic about producing an edition of the Bible that’s easier to understand. Another thing they were passionate about was a program they developed called Word for Word. For every Word for Word Bible that’s bought, they donate one to someone in need. I thank God for companies like Whitaker. And of course, my review of the KJVER personal size large print Bible is coming soon. 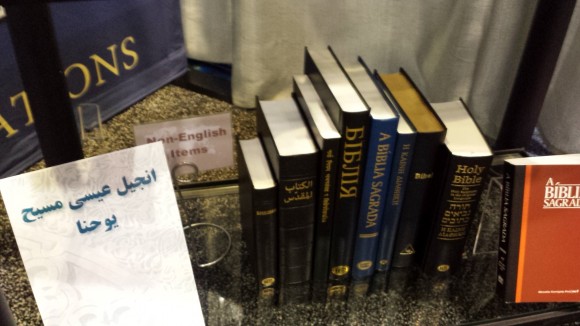 One of the common themes was the need for Bibles in other languages. TBS is producing Chinese and several others, Whitaker is developing editions in several languages (they want to distribute Bibles all over the world), I saw several other publishers and printers with editions in many languages.

I also learned a few new secrets. Surprise! There are more Bibles coming. Unfortunately I can’t discuss any of them and if you come to my house I will have to hide the test production sheets that a VIP gave me (and no, I won’t give any hints, and yes, it is awesome). I personally want two of the three Bibles for my own use and I want the third one (a translation I don’t use much but is much needed) just because. 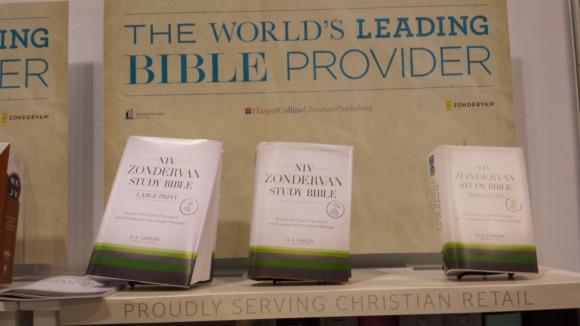 Of course there are some new Bibles coming out that I can discuss. One in particular is the full color Zondervan NIV Study Bible from D. A. Carson. This thing is massive! They even have a large print edition (these are size and construction samplers that have blank pages). It will be over 3000 pages and have 20,000 notes, 120 charts, 200 maps, 30 articles, a concordance with 35,000 references, and lots more. I’ve only thumbed through the sampler (which is still a work in progress) but I would compare its design to the ESV Study Bible and the Holman full color study Bibles.

What really hit me was how much BBG is appreciated in the publishing industry. I expected at least someone to have heard of this little website, but that’s not at all what I found when I got here. It’s much bigger than I ever dreamed. I was told today by two different major Bible publishers what BBG means to them. I was told yesterday that BBG will be used for training store employees about Bible features and how to describe them to customers. No pressure 🙂

I’ve met a lot of superstars in the Bible publishing industry. They are very open-minded about Bible design and keep asking for feedback and ideas. I can actually be an influence in Bible design and production. I am thankful that God placed this idea in my mind all those years ago, for all those that helped develop the idea (other blogs, reviewers, etc.), for the publishers that have supported BBG through review copies, and most importantly the readers that have helped spread the word and encourage me to keep doing this.

Tomorrow I hope to get some time with the Crossway crew. Unfortunately Lizzy isn’t here but I did get to meet Andrew Tebbe. Now it’s time to sit back with my top secret test sheets and my Cambridge candy bar. Fortunately there’s a Duncan Donuts a block form here. Coffee and stuff.

BTW, I’m loving Orlando. The people couldn’t be nicer. I just wish they would turn down the heat a little bit. It’s not entirely their fault – they didn’t know I was coming. Yesterday was in the 70’s (wow). We played mini golf until we couldn’t walk (we’re getting around 7-8 miles per day). Today was back to typical Florida weather. It hasn’t rained today though. It’s the first day without a five minute downpour. What’s up with that?