Creative Lettering and Beyond Review 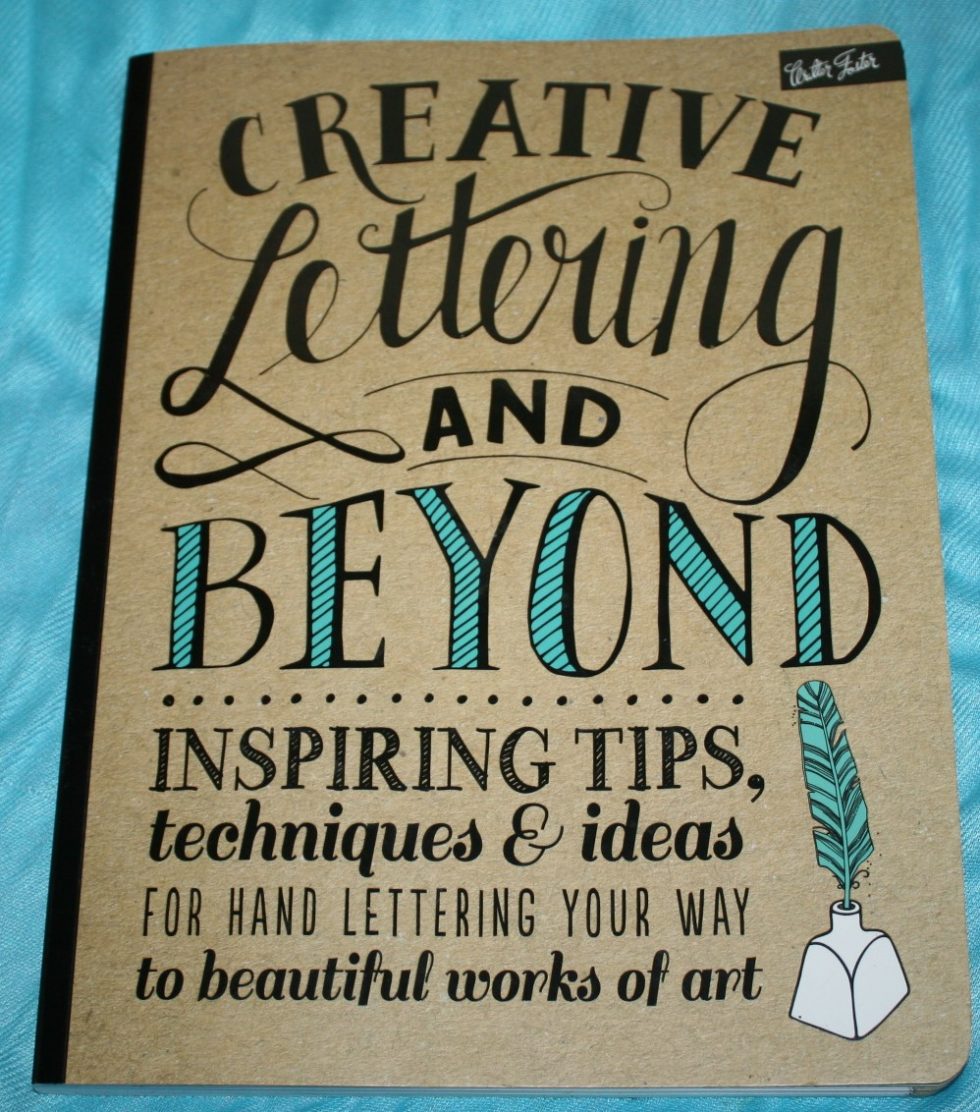 In my attempts to learn new lettering styles I recently purchased Creative Lettering and Beyond. It is put out by Walter Foster and has 4 sections, Modern Calligraphy, Illustrated Lettering, Chalk Lettering, and Lettering Crafts each written by a different artist. The book includes practice pages (and they give you permission to photocopy the calligraphy practice page). It’s a craft book not a Bible book  so only part of the information is relevant to Bible journaling. 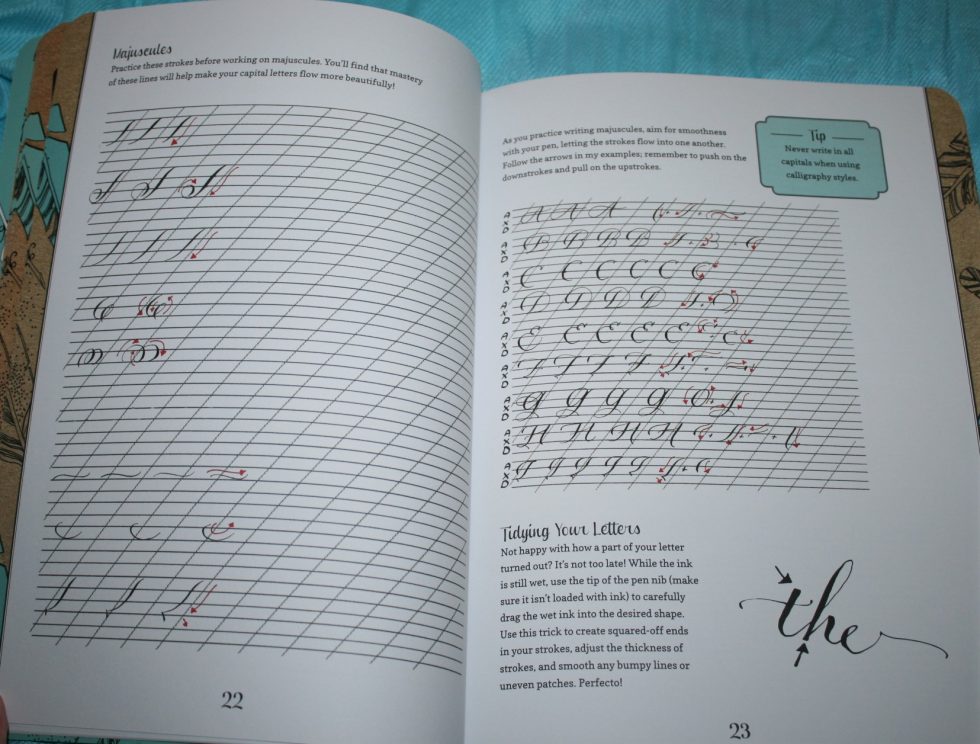 I haven’t practiced enough to be proficient yet but the first section by Laura Lavender is a very complete explanation of beginning calligraphy. With lots of tips and illustrations she steps you slowly through a basic and useful font. She then gives you examples and advice for varying the font (changing slant, flourishes). 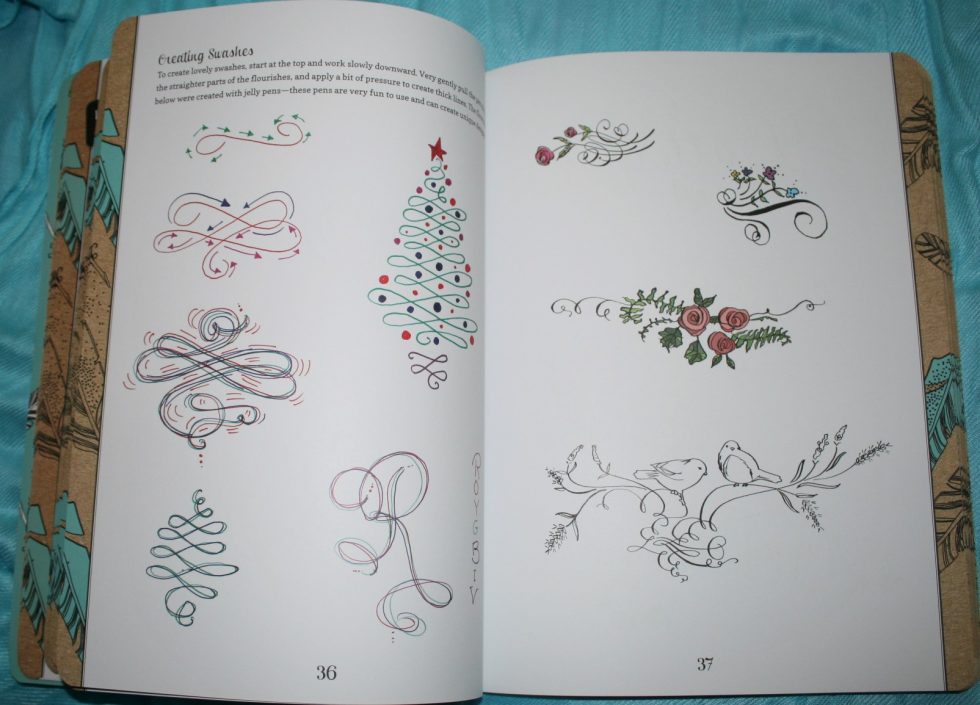 She shows you how the strokes and swashes can be combined not just to write words but draw pictures. The chapter even includes examples of numbers and borders using the same lines and pen skills. 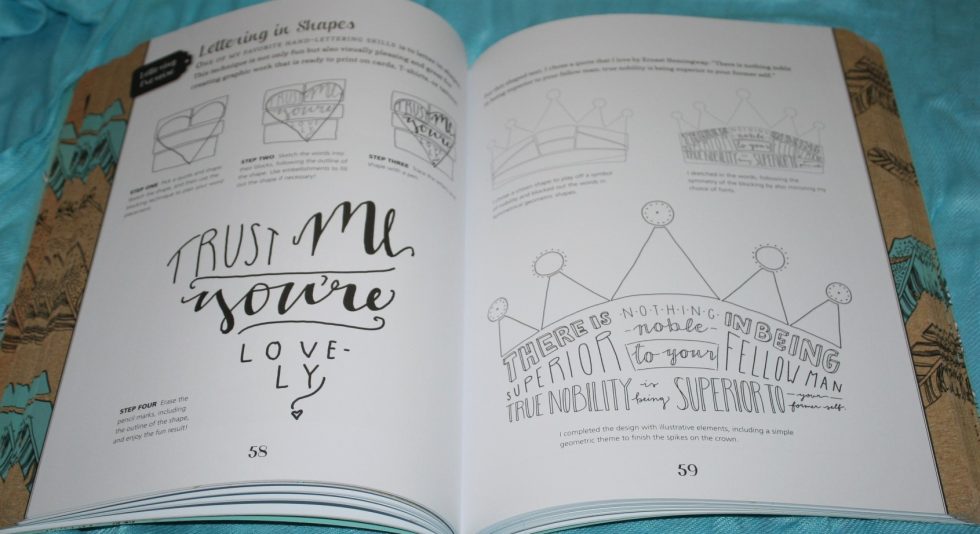 Gabri Joy Kirkendall’s approach is much less step by step then Laura’s. This section includes advice on stippling, blocking, mixing fonts, negative space and more. Her approach is to give you the steps to get started and an example of where you could end up. Very few of the projects included in this section are actually done on paper but most would be easily converted for Bible use. 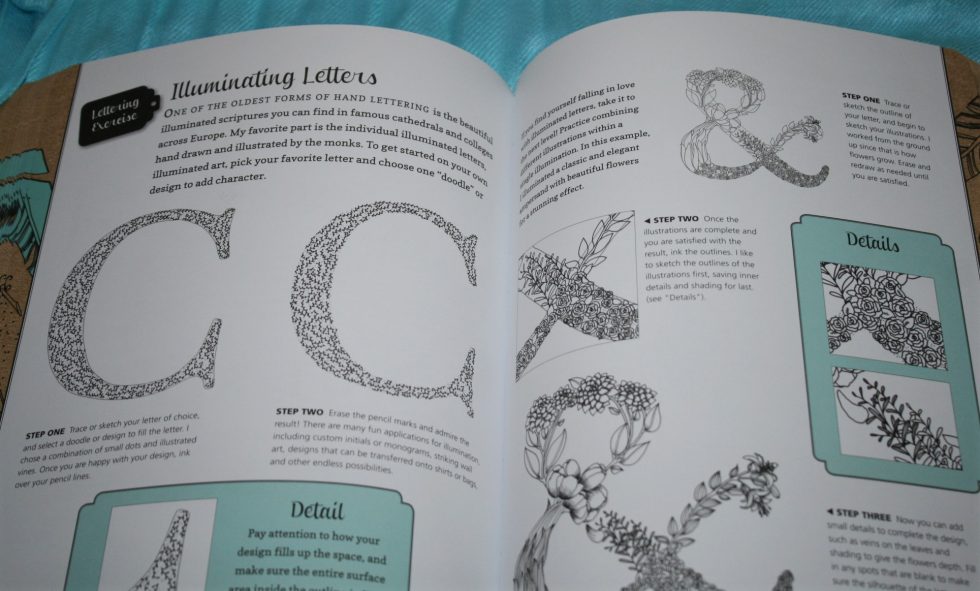 Illuminated lettering is included in this section and she notes that is one of the oldest forms of hand lettering and that it has appeared in Bibles for centuries. If you’ve ever wanted to convert your lettering (or artwork) to a digital format she even includes lots of tips for that. 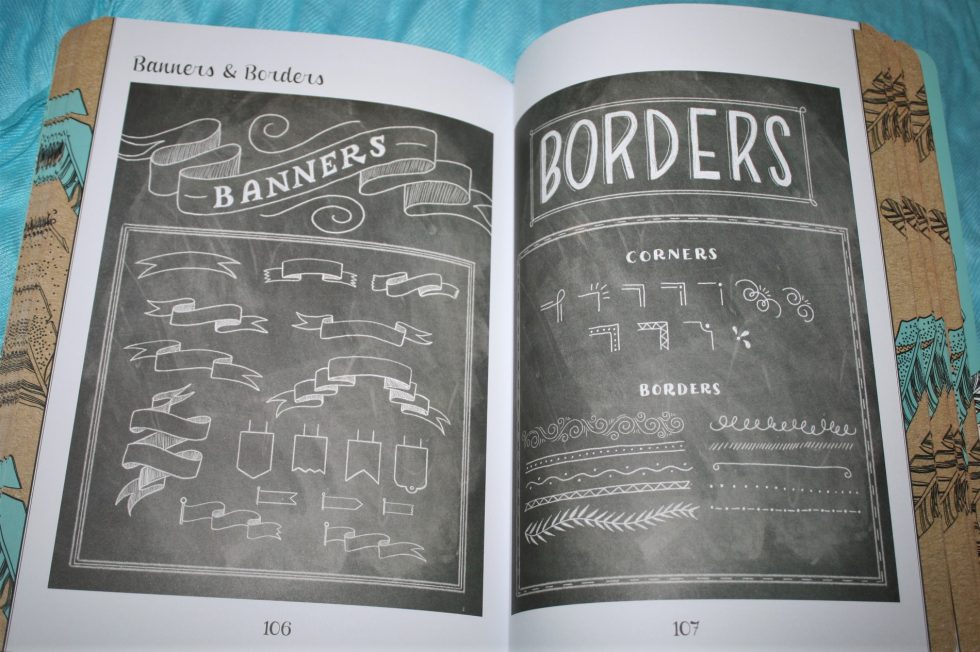 Starting with the various tools (including digital ones) and how to make your own chalkboards Shauna Lynn Panczyszyn will teach you a lot about chalk lettering. While I doubt many of us will use chalk in our Bibles (I have used pastels) her advice for creating dropcaps and her examples of lettering are inspiring. 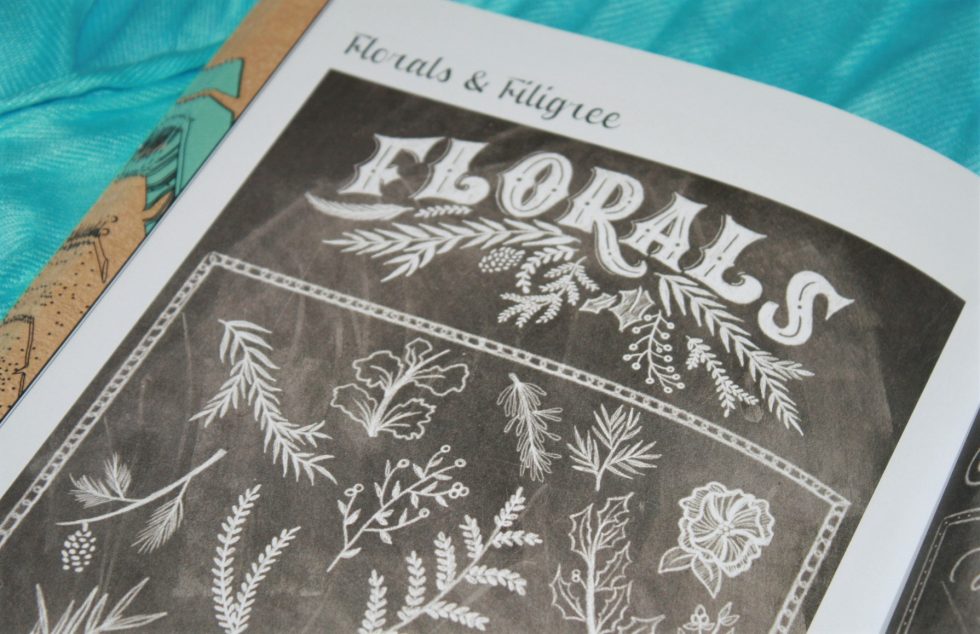 I particularly like her examples of florals, filigree, banners, and borders and will be working some of these elements into upcoming projects. 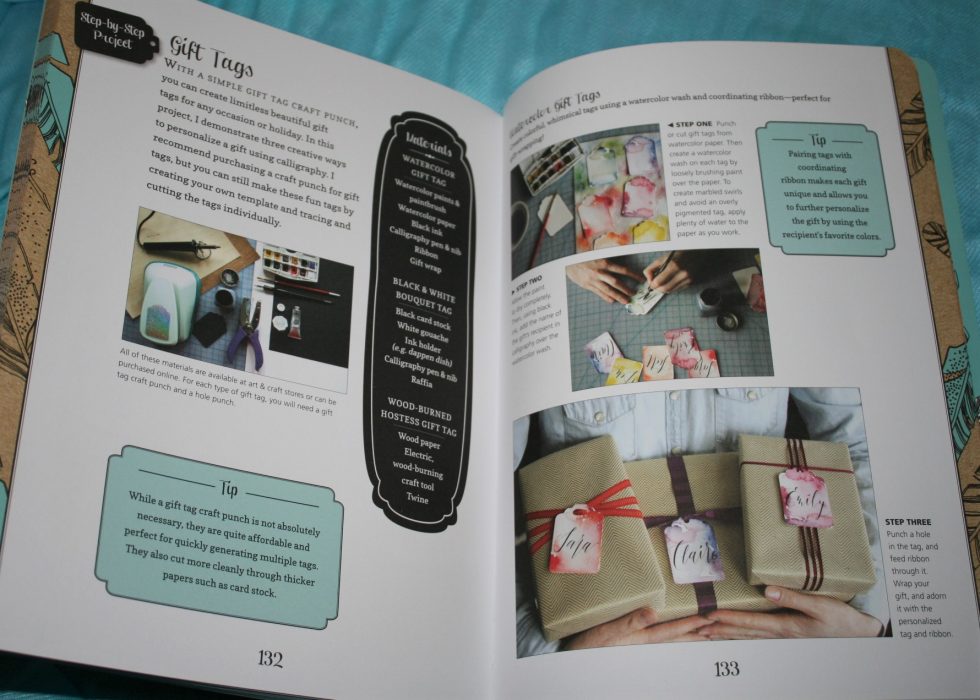 Julie Manwaring gives you 3 ideas for using all the lettering skills you’ve learned in the previous sections. Gift tags (3 styles, watercolor, word burning, and black & white), calligraphed place settings, and monogrammed napkins. This is the shortest section and the gift tags (useful as tip ins?) is the only one that has an obvious application for our Bibles.  These projects are detailed step-by-step and a lot of us choose “art” as our style of journaling because we like arts and crafts so this section could be useful outside of our Bible time. 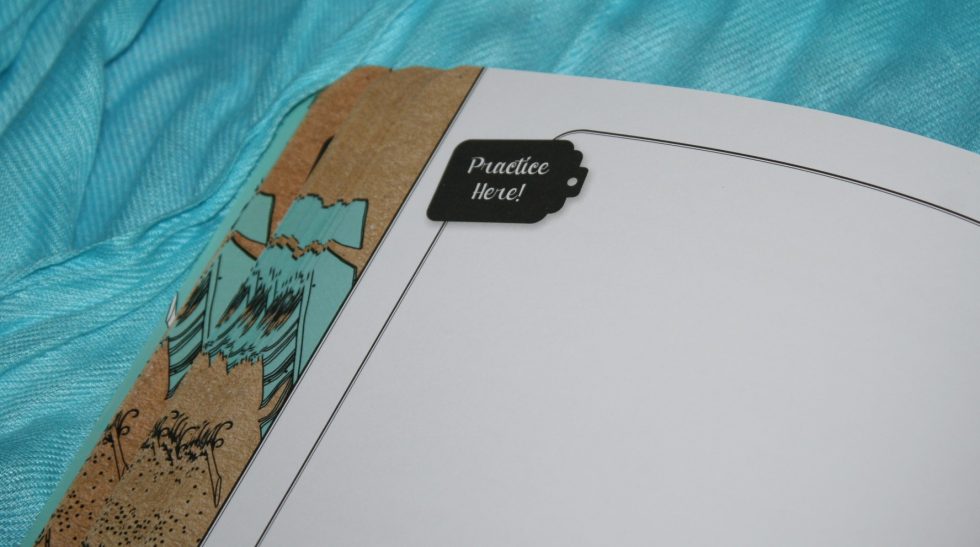 Creative Lettering and Beyond includes lots of information on lettering and lots of examples of uses for lettering skills. If you are only going to buy one lettering book I probably wouldn’t pick this one. It would depend on the person (how much skill they already have, how much instruction needed to gain a new skill, how likely to do crafts besides Bible journaling) whether I would recommend it as a first lettering book. I can definitely recommend adding to a lettering or crafting library as a source of lettering information and inspiration however. If I could change one thing about it I would include a couple more examples of complete alphabets.

Do you own this book? What are your favorite parts? What lettering book (or books) would you recommend? Let us know in the comments.

This book is available at Amazon

. You might also find it at your local craft or book store.

Some of our links are affiliates.

The Art of Words Review 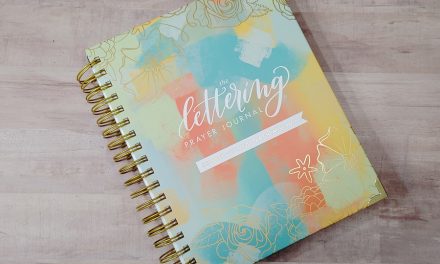