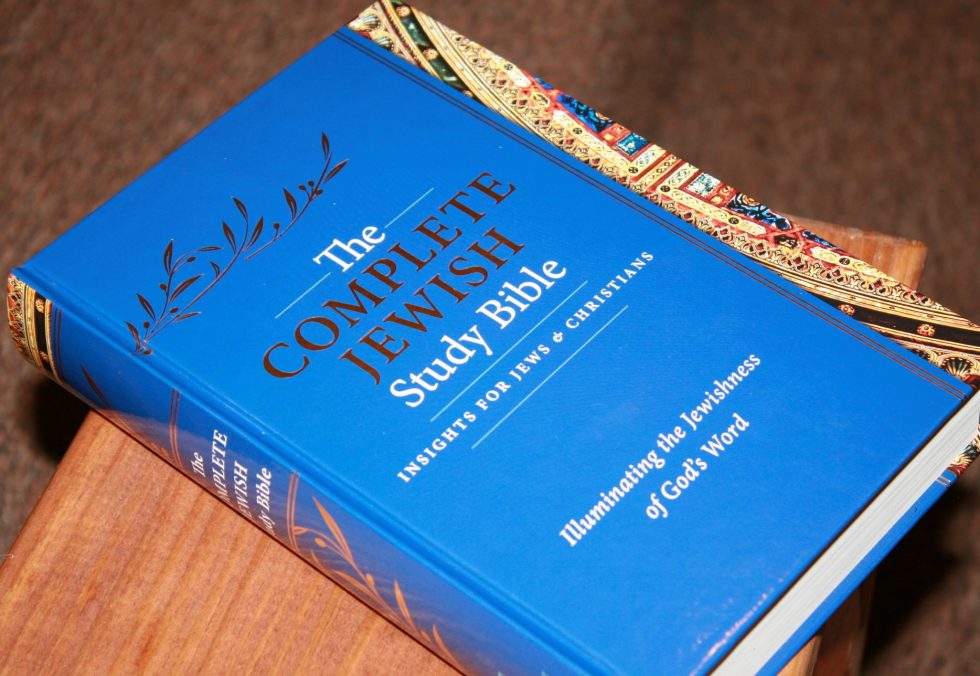 Hendrickson has added lots of notes and study material to the newly updated text of the Complete Jewish Bible (CJB) to create The Complete Jewish Study Bible. The translator states that “By clarifying the Jewish nature of both testaments this study Bible seeks to help both Jews and Christians understand better their common heritage.” 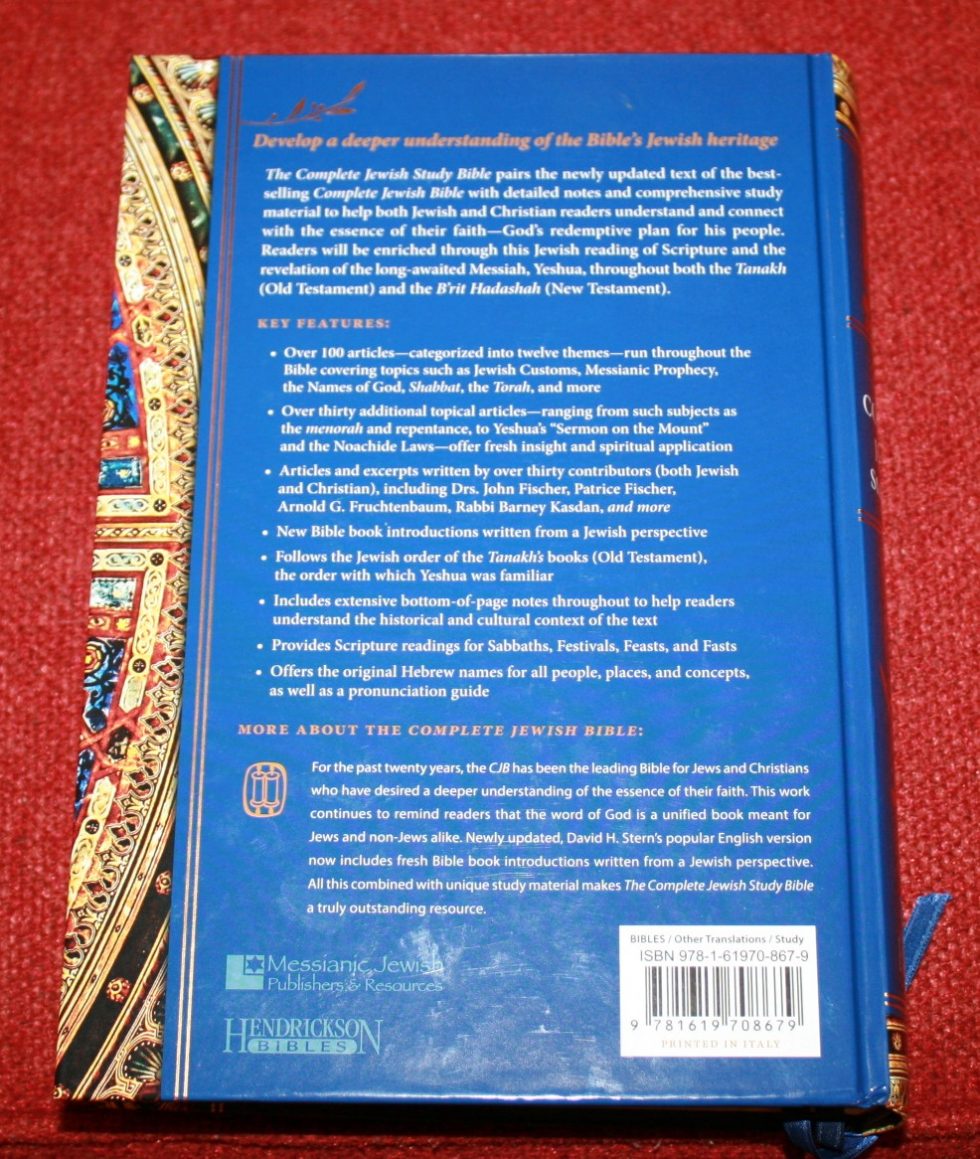 This edition is the (somewhat reflective) hardcover. It measures 9 1/2″ x 6 5/8″ x 1  3/4″ and has a sewn binding. This Bible is also available in a dark blue imitation leather cover and a black genuine cowhide cover. It has two blue ribbons. 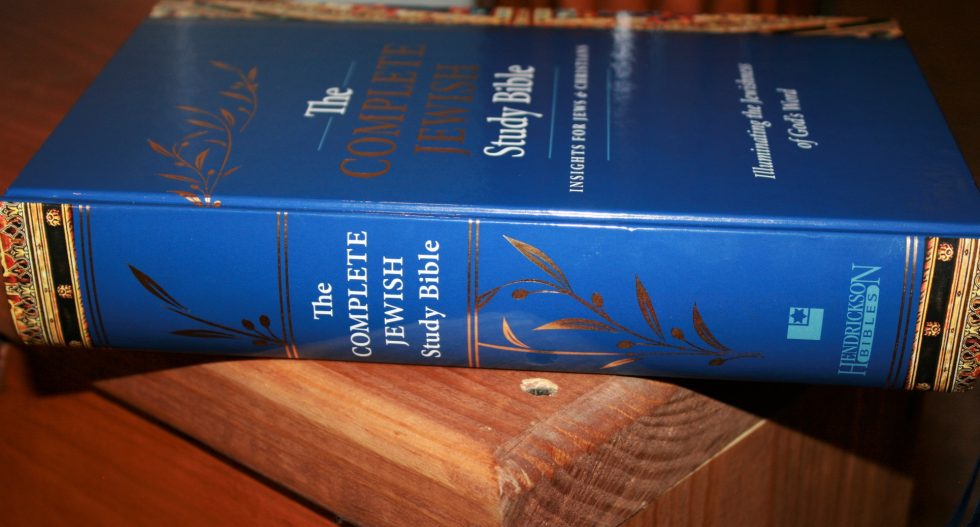 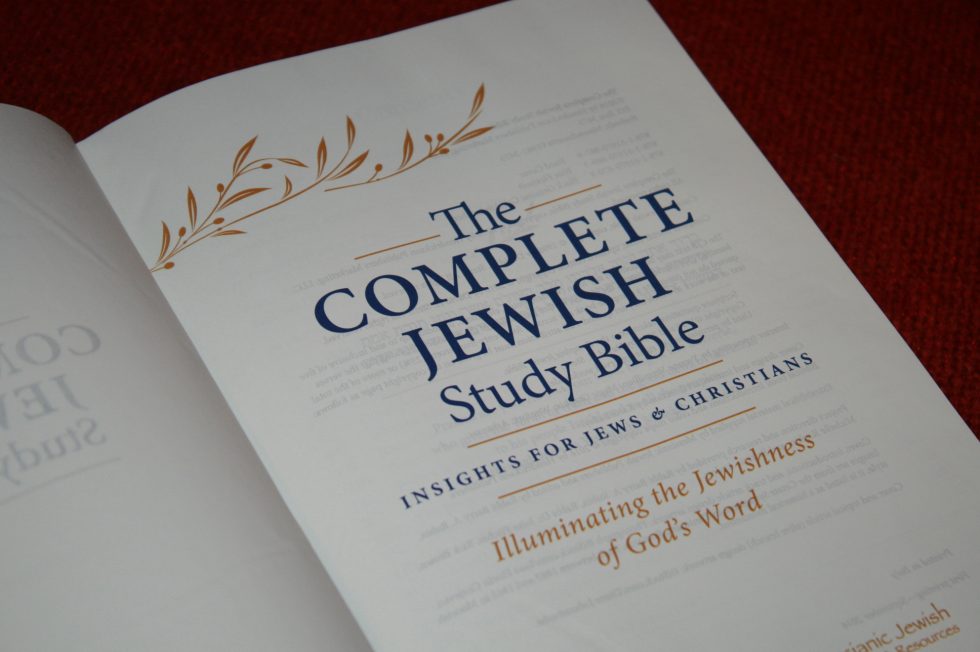 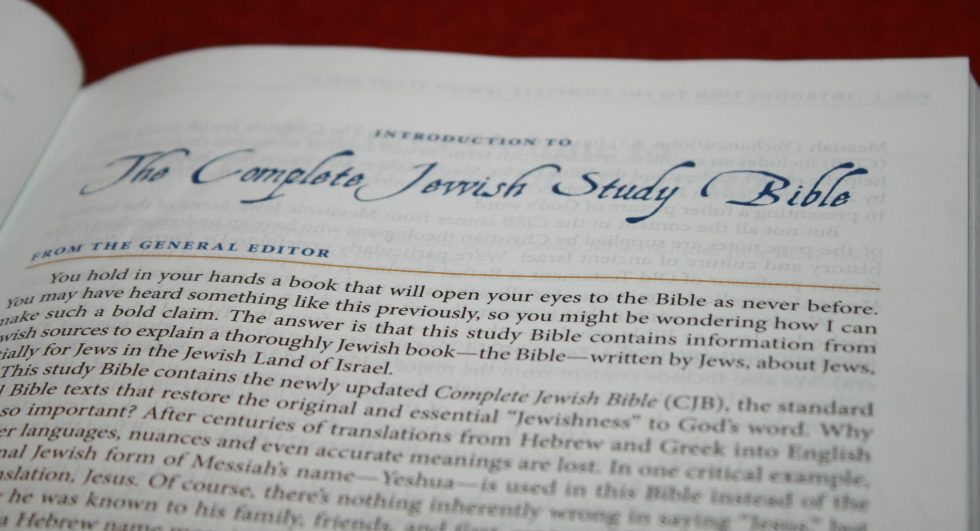 The paper is around 30 gsm and is comparable to most modern study Bibles. It is pure white paper and neither Randy or I had any trouble turning pages. Show-through is minimal and I didn’t find it distracting while reading. 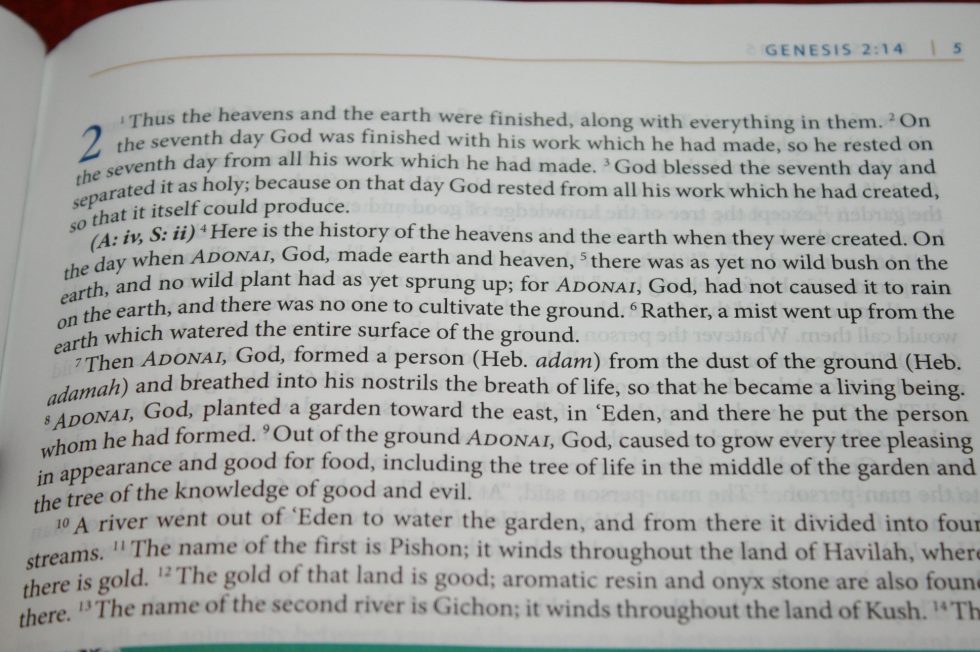 This is a single-column paragraph format with notes in the bottom portion of the page and a poetical format where appropriate. It has a 10 point font with good leading space. Chapter numbers are in blue and easy to spot. Verse numbers are lighter and, in my opinion, are just noticeable enough to help you find the verse without being overly distracting while reading. 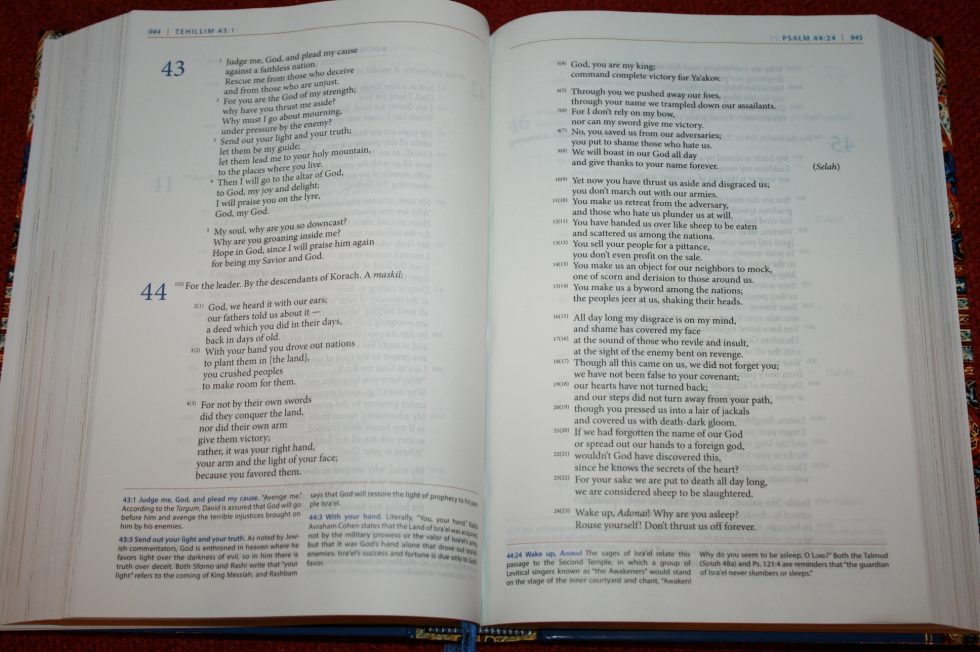 Headers and footers are divided from the main text with gold lines. The header shows the page number, book name, chapter, and verse numbers in the outer corners but is unique in the fact that the Hebrew book name is given on the left page and the English name on the right. 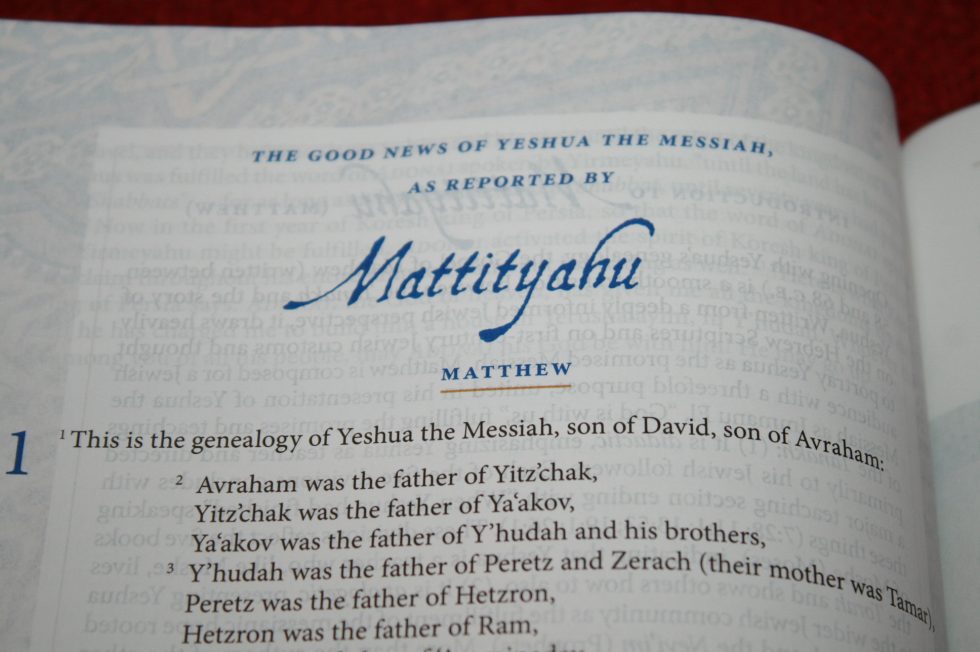 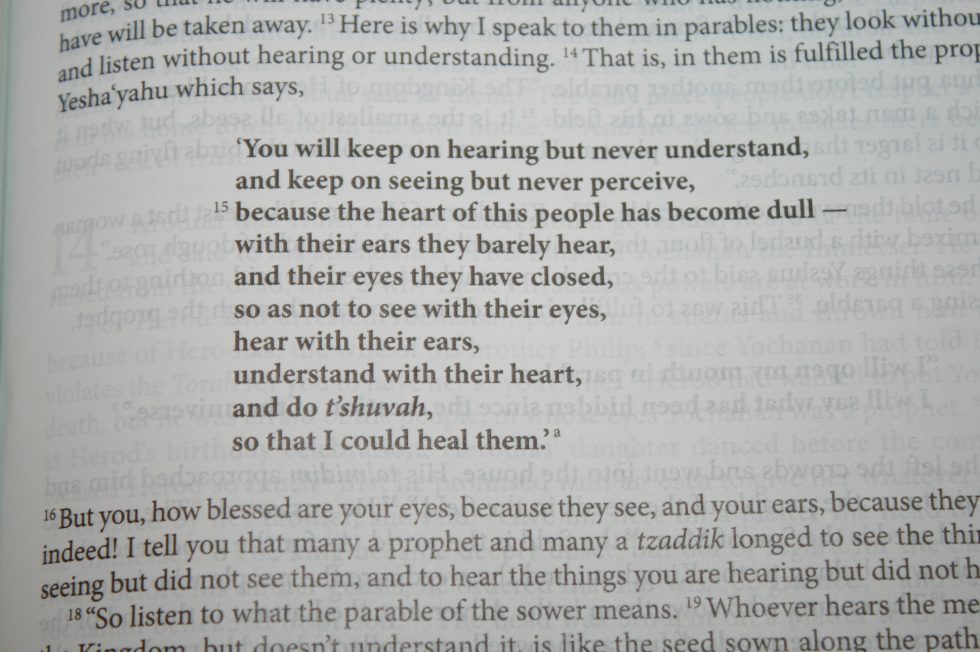 In the New Testament quotes from the Old Testament are done in a bolder font to make them easier to spot including a few Christians don’t always think of as quotes. 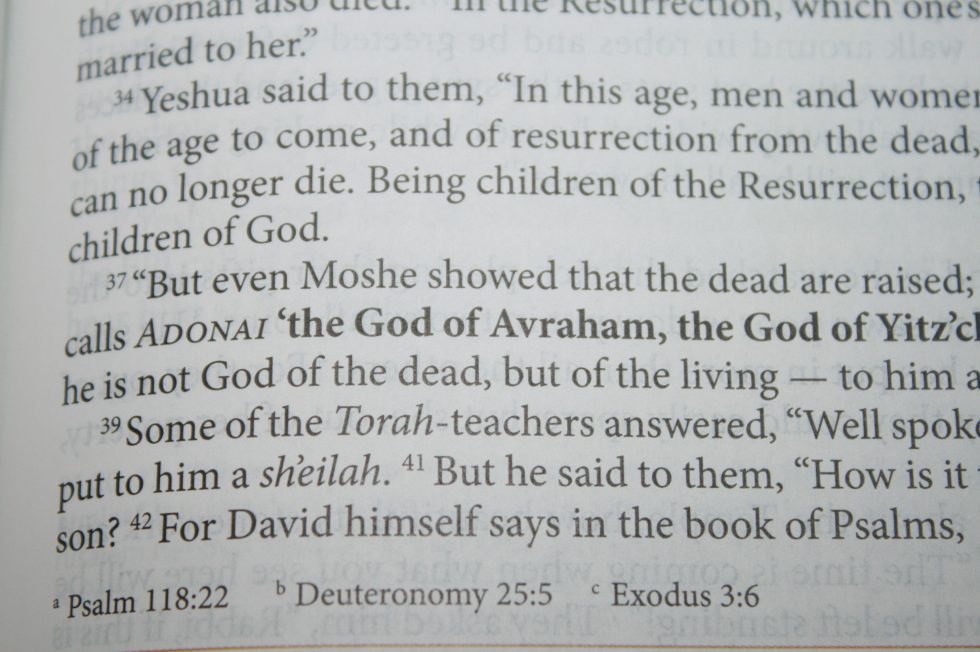 The only references appear in the New Testament and are footnotes telling where quotes are from. There are a few starred footnotes mostly dealing with textual variations, word usage, or referring you to further information.

This is a Jewish Bible. The order of the Tanakh (Old Testament) follows the traditional Jewish ordering. Any verses that are numbered differently give the Hebrew numbering first, with the Christian numbering in parenthesis. All names of people, places, etc. are given with the Jewish spellings (Z’kharyah instead of Zecheriah, Mattityahu instead of Matthew) in both the Tanakh and the B’rit Hadashah (New Testament).

While it does not include the blessings pronounced before and after the Torah and haftarah readings (they can be found in almost any Jewish prayer book) it does include a suggested pair of prayers for before and after reading from the B’rit Hadashah in both Hebrew and English. 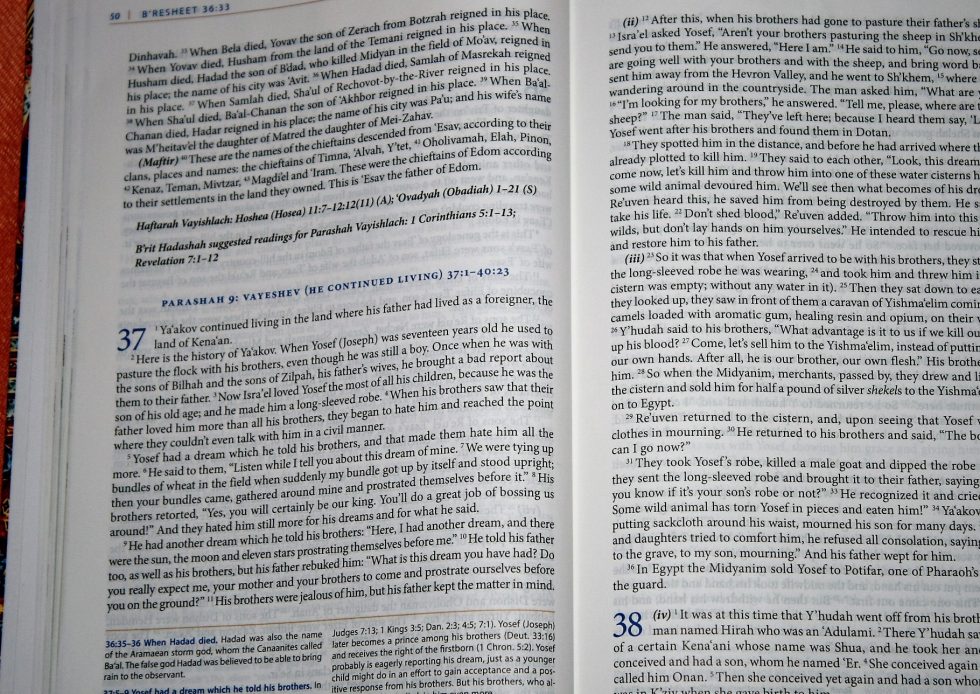 The editors have included all the information (except Jewish calendar dates) that one needs to organize or follow the weekly synagogue readings from the Torah and the Prophets. The beginning of of each Parashah is clearly marked in blue. Within each Torah portion Roman numerals indicate the beginning of each ‘aliyot. An S or A is included where Sephardic and Ashkenazic traditions vary and even the differences for years that do and do not include a “Second Adar” are indicated with either a RY or LY. The Maftir is indicated near the end of the seventh ‘aliyah and the references for the Haftarah and suggested B’rit Hadashah readings for Messianic Jews are printed in bold lettering at the end of each Parashah. 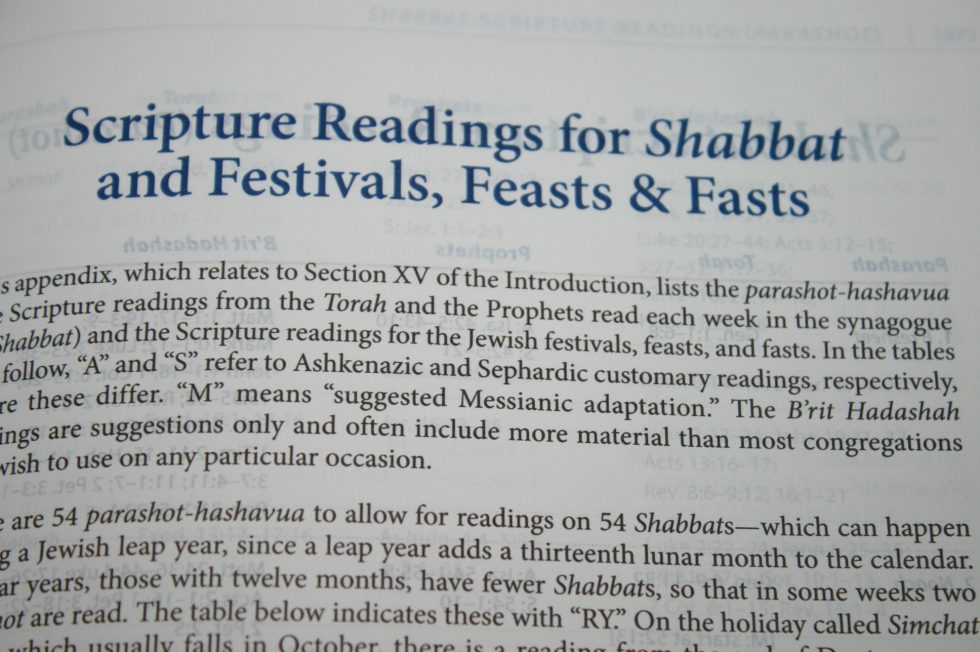 There is a reference table in the back for all of these Shabbat Readings and a table that includes the references for the traditional readings for all the Festivals, Feasts, & Fasts of the Jewish calender. 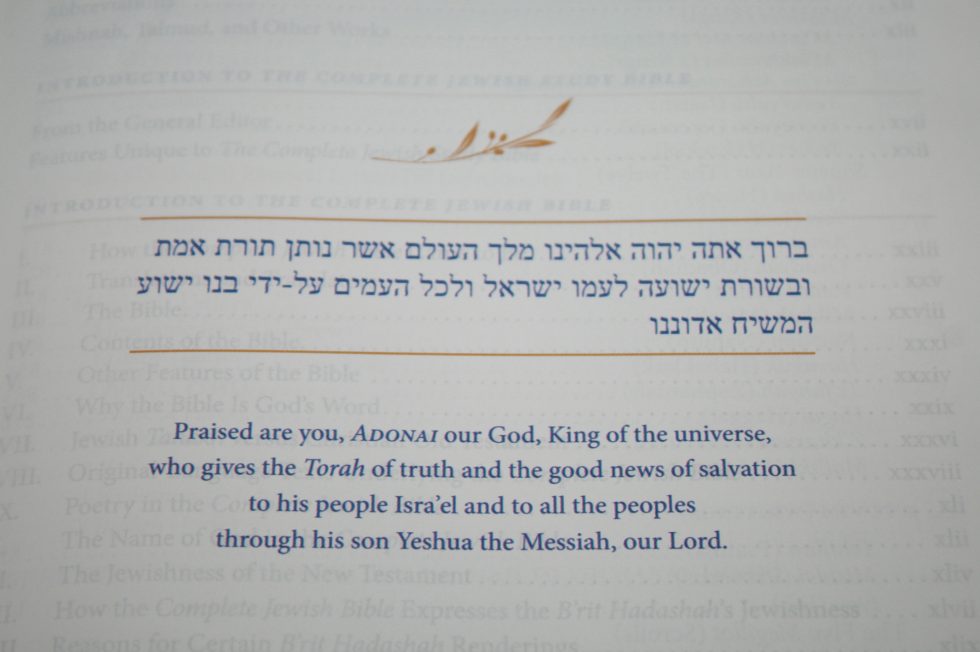 The translator, David H. Stern, calls the CJB a version rather than a translation or paraphrase because it is partially both. He originally completed his translation of a Jewish focused New Testament in 1989. Many fans of it requested a complete Bible which he resisted the idea of at first. Feeling his understanding of Hebrew (particularly Biblical Hebrew) inadequate for the task he tried various routes to get a modern English Tanakh all of which fell through or didn’t feel right. He finally settled on the idea of paraphrasing the newly released from copyright 1917 JPS Tanakh (which had a somewhat Elizabethan English style). He did read other modern English translations and refer to the Masoretic texts to actually translate some passages that differed in the various versions. The Complete Jewish Bible was first published in 1998.

He is the sole translator of this version. He admits that a team might of done a better job (using peer review and discussion of problematic texts) but he has done the best he could. His first purpose was to restore the unified Jewishness of the Bible. He suggests that any reader wanting to check whether a scripture means what the CJB says is means look at other translations, Bible tools including concordances, and the original languages. 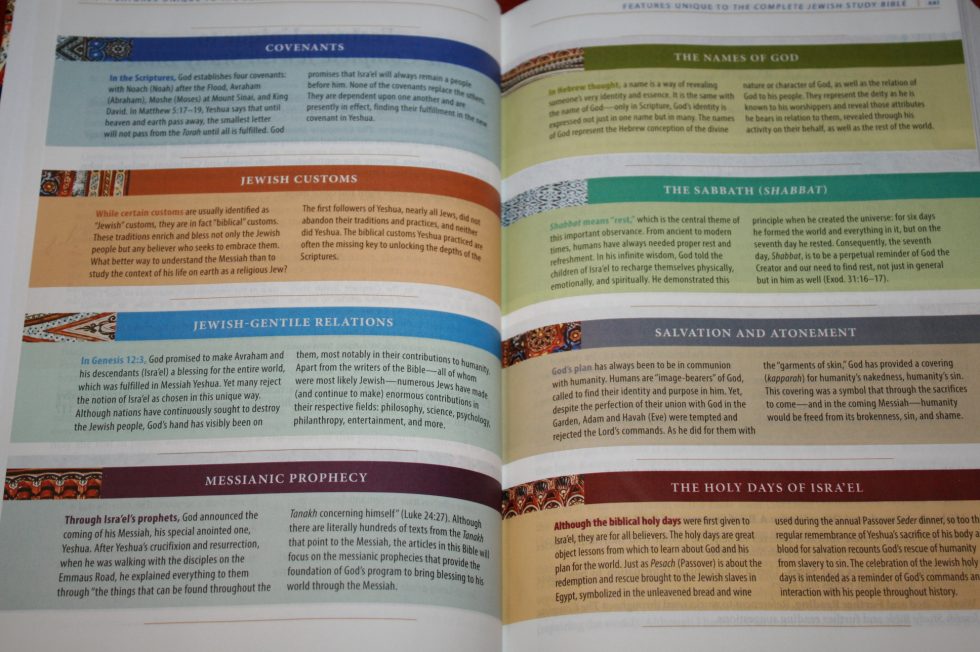 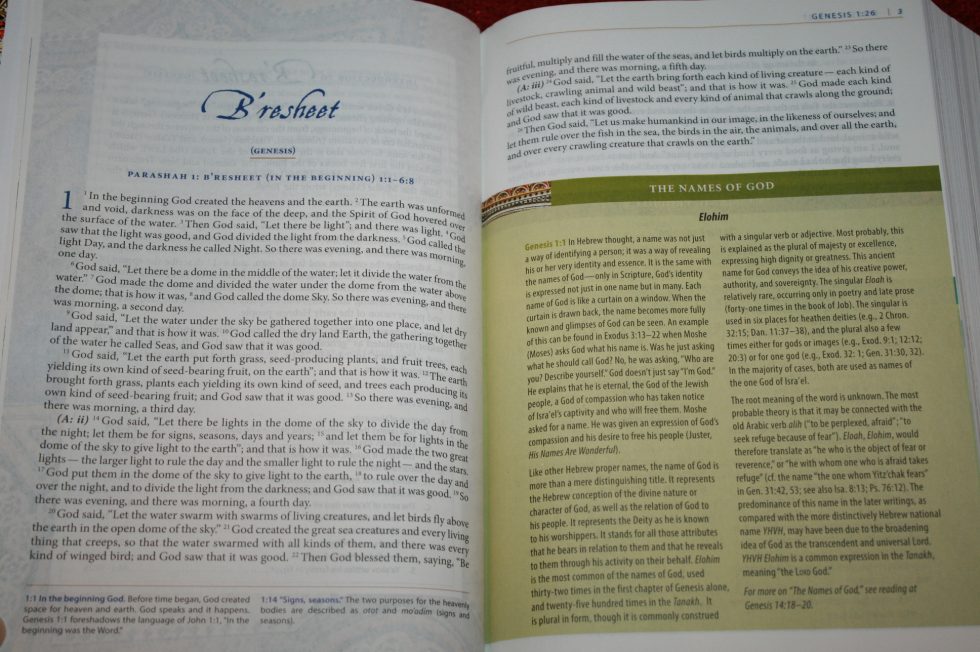 Each theme has it’s own background color making them easy to identify. To find the next article in the theme you can use the reference at the end of each article (except the last in the theme) or the index in the back of the Bible that lists them all. 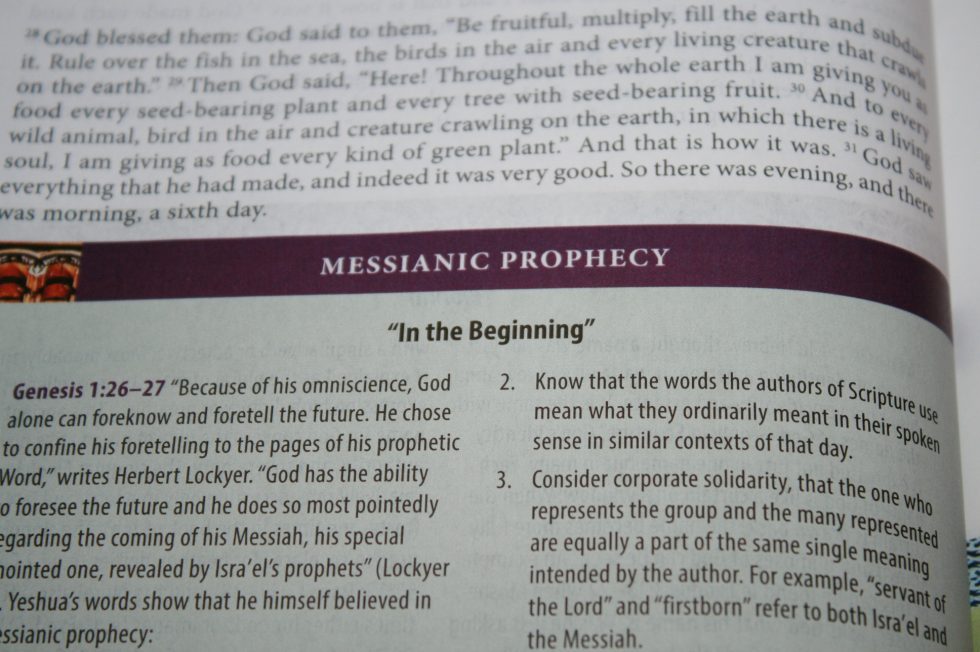 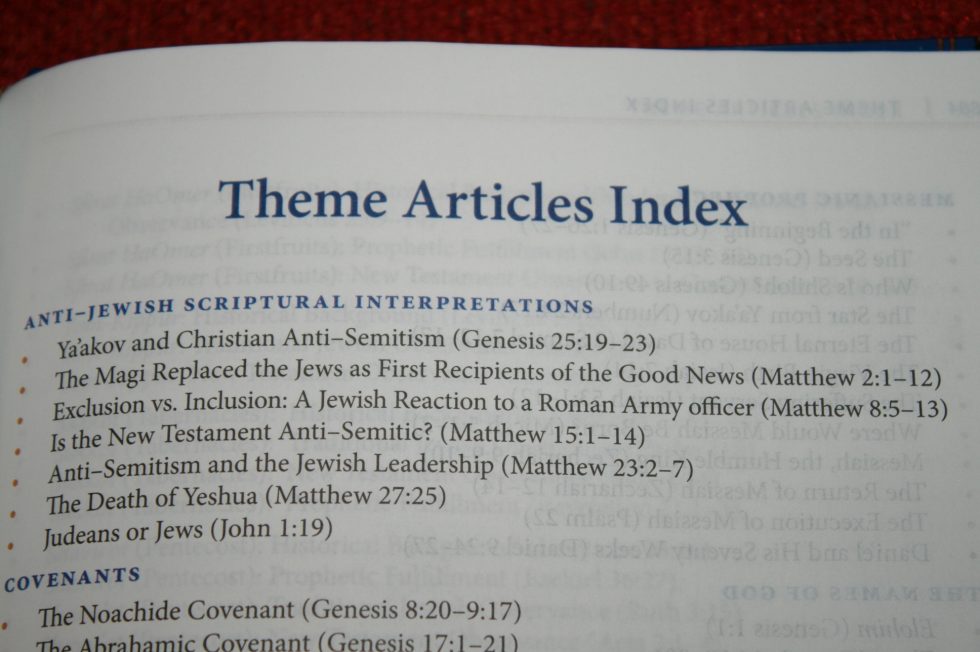 There are also 34 other articles on things like the Menorah, The Sermon on the Mount, and Yeshua on Prayer. The topics of these articles are helpful but don’t coincide enough with the 12 chosen themes to be included there or with each other enough to make 1 or 2 more themes. 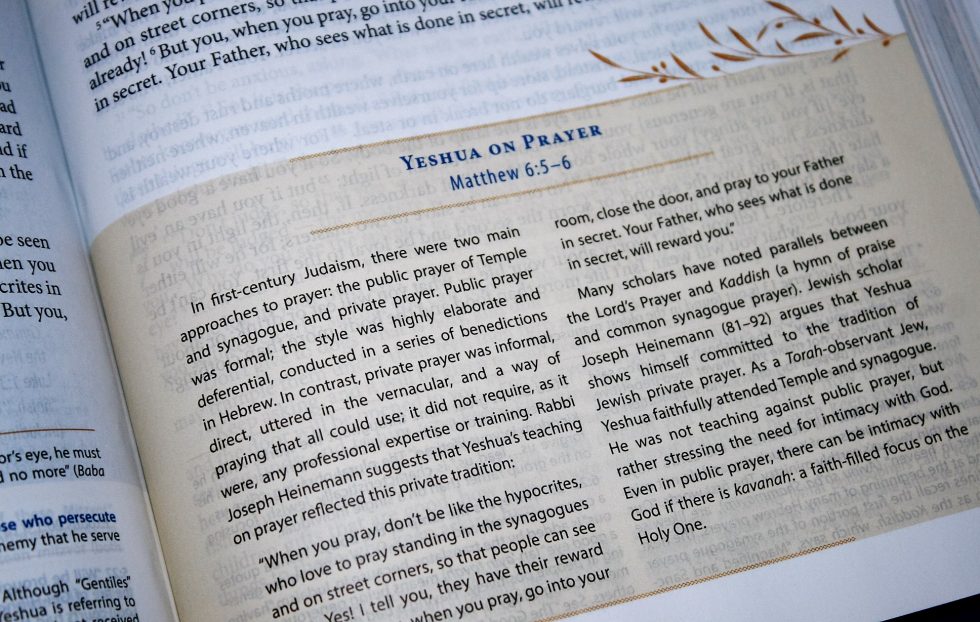 The articles were written by over thirty contributors (both Christian and Jewish) including Drs. John and Patrice Fischer, Arnold G. Fruchtenbaum, and Rabbi Barney Kasdan. A full list of contributors with brief biographies is included in the back. 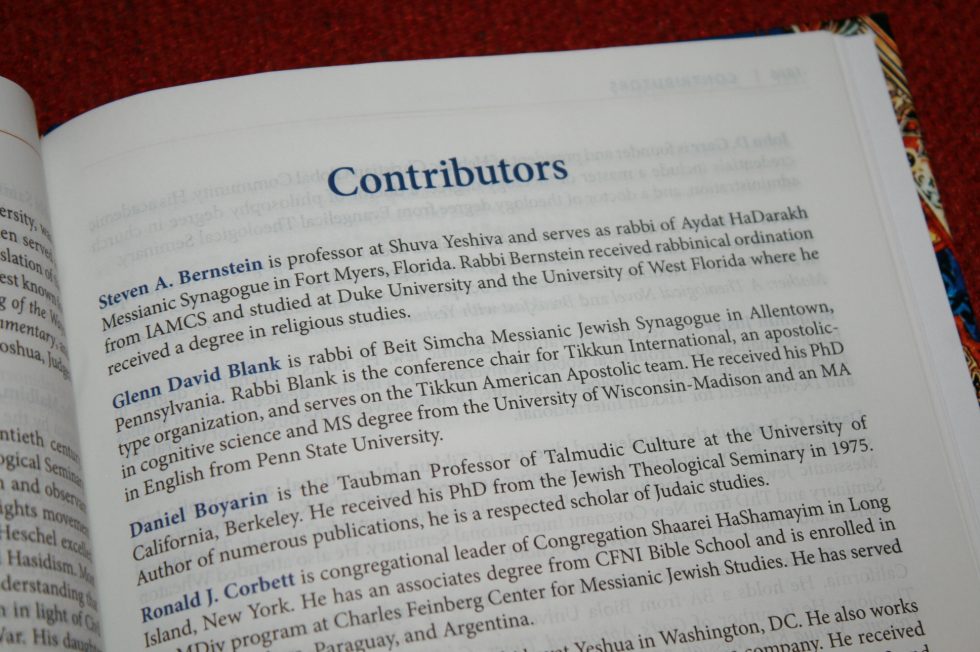 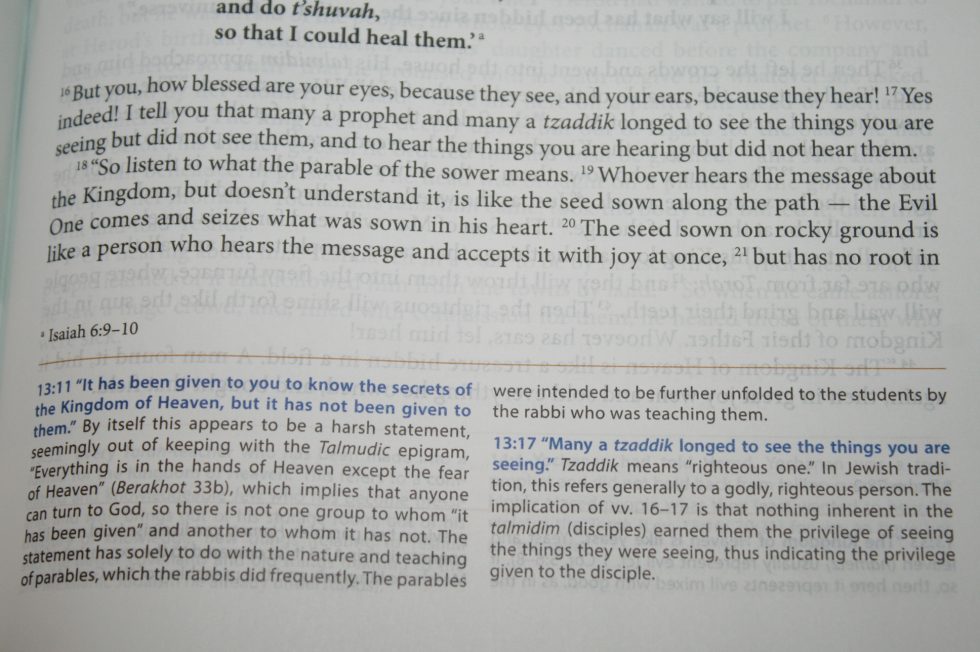 This Bible also includes hundreds of study notes, primarily dealing with the historical background and cultural context of the verses. The verse number and a portion of the scripture are printed in blue in the footer with the body of the note in black. 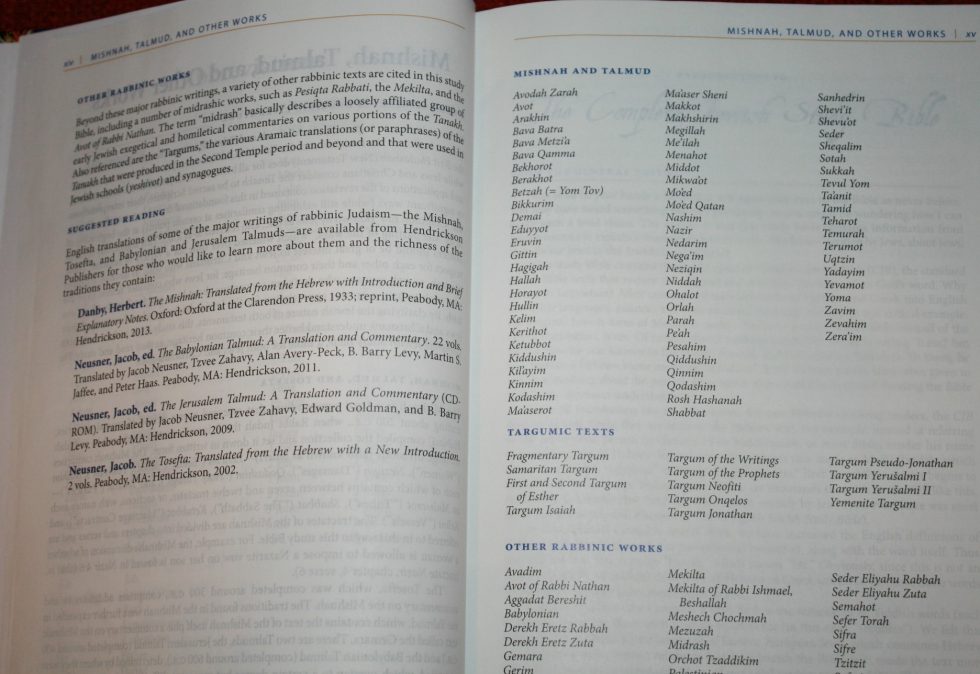 The Misnah, Talmud and other rabbinic literature are important to Jewish faith and life. They are cited in some of the notes in this Bible. A brief description of them and some suggested readings for further study are included.

The rest of the notes come from the article contributors, and from well-known Rabbis and scholars, both ancient and modern.  A list of Rabbis and Sages through history (with short biographies) that have been referenced is included as is a list of works cited and suggested further reading.

New book introductions were written for this Bible from a Jewish perspective. These introductions give the setting for the writing of the book sometimes including definitions, history, and central message and always including an outline of the book. 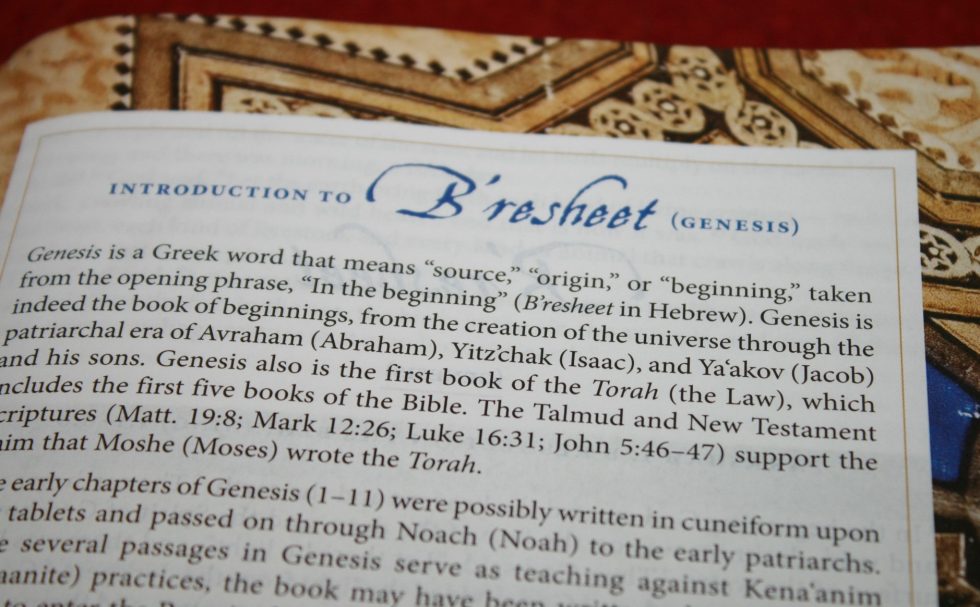 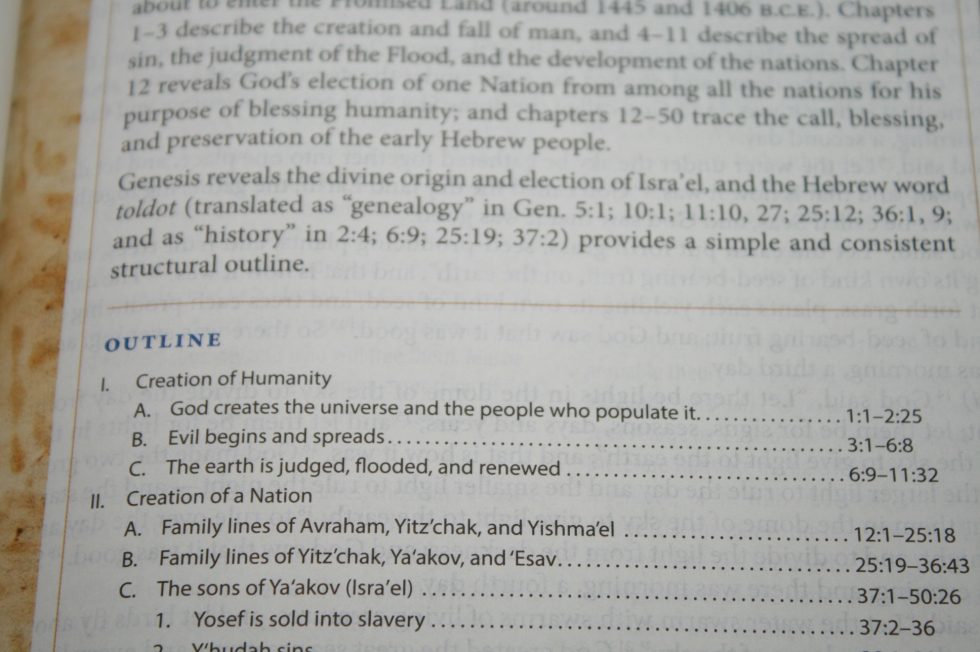 The have included many features to make this bible accessible to people of various backgrounds. It has three indexes: one with the Tanakh in the Jewish order found in Hebrew Bibles, one listing the books in the order found in most Christian translations (based on the Septuagint), and the third listed in Alphabetical Order that includes both the Jewish and Christian names for the books. 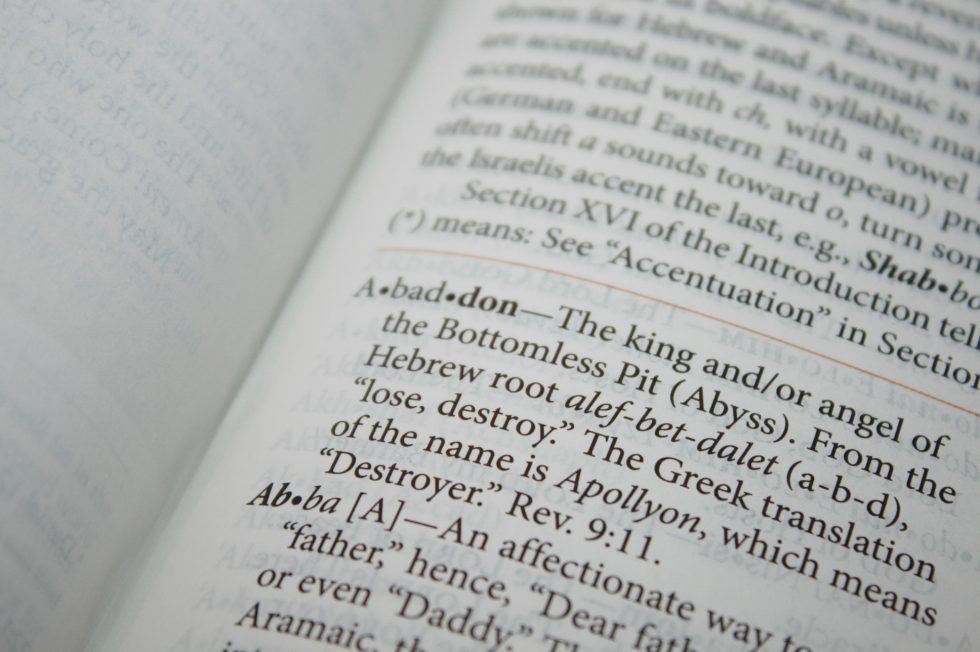 For those of a Christian background they have included a pronunciation key for Hebrew, a glossary of Hebrew Words into English that includes variations of English spelling for names and definitions for terms, and a glossary of English Words into Hebrew so you can look up the Hebrew words for common English names and terms. 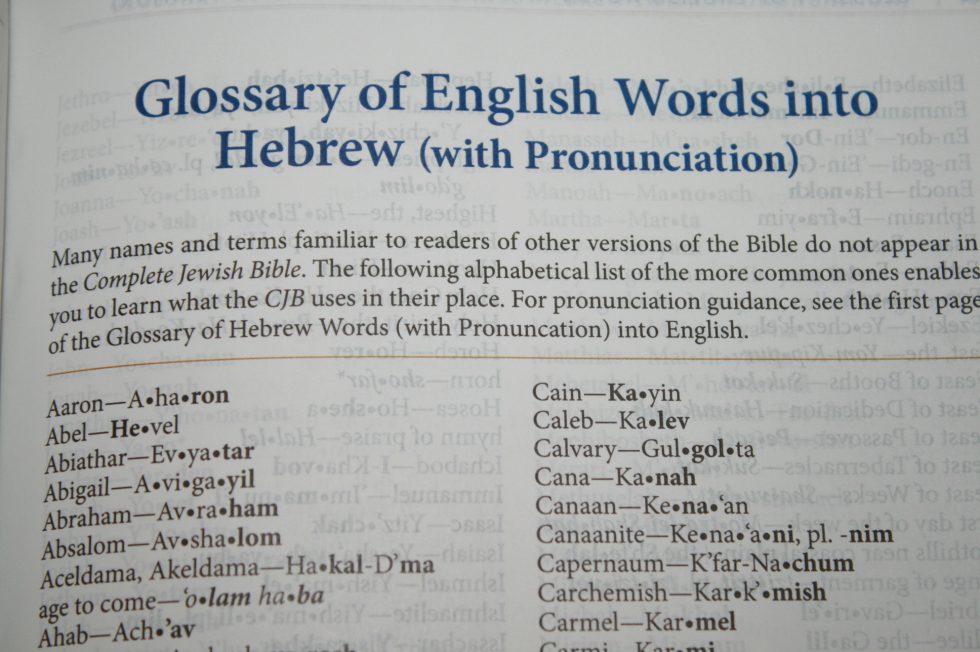 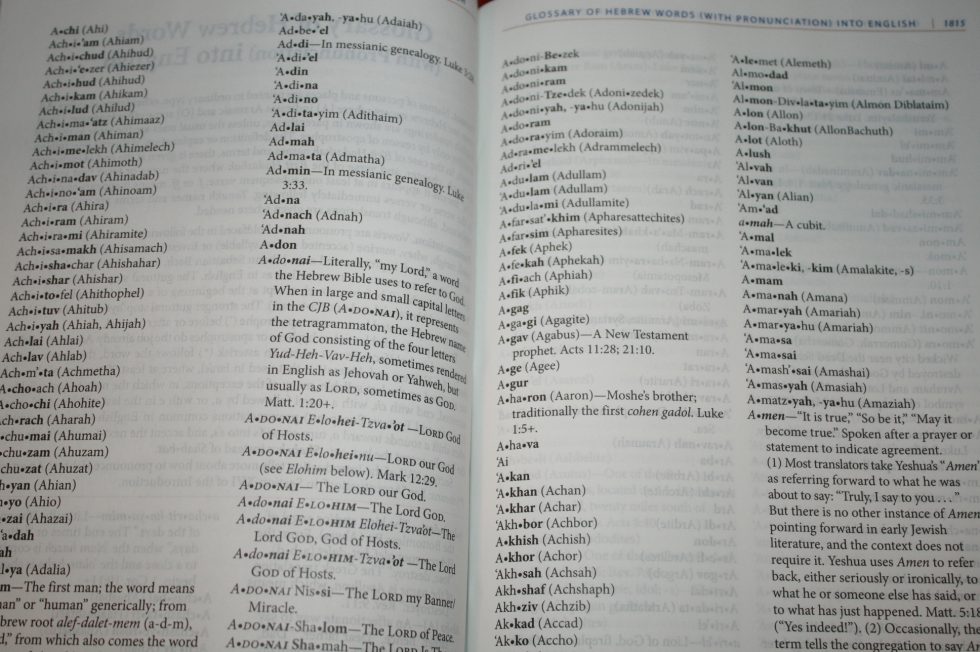 There is also an index on Tanakh passages cited in the B’rit Hadashah and a table of some Messianic prophecies with references cited of both the prophecy in the Tanakh and the fulfillment in the B’rit Hadashah. Both of these are useful to show both Jews and Gentiles that the Bible is truly one story. 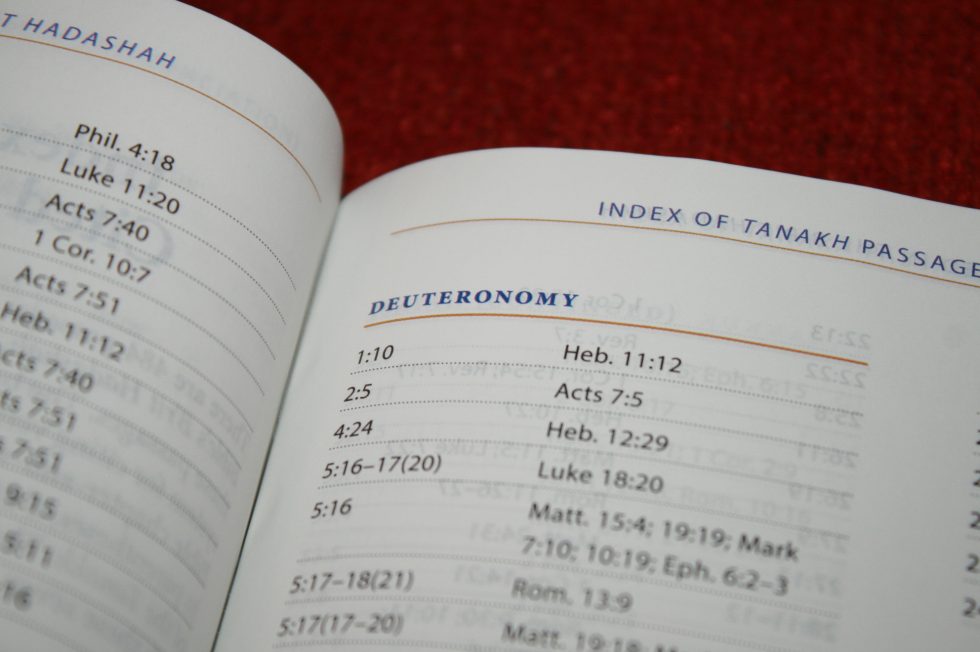 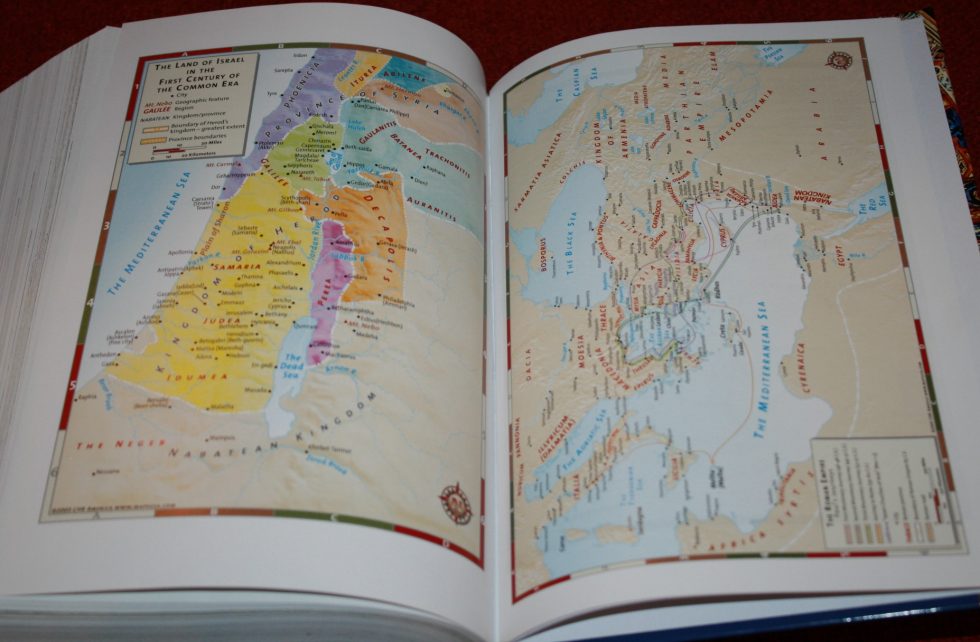 There is no index to the maps but they are well labelled and easy to read.

I love this study Bible. As a beginning level student of both the Hebrew language and Jewish culture I find it an invaluable tool. In one place I can look up pronunciations, read about Jewish customs, find the traditional Jewish understanding of verses, and much more. It is a Bible I plan to thoroughly study, and refer back to frequently for months or years to come. It won’t replace the main Bible I carry to church (I need one with the traditional Christian ordering of the Old Testament, a more common translation, and more references for that) but I will take it along to some services and Bible studies with my main Bible. I think the Complete Jewish Study Bible would be a good addition to the library of anyone wanting to clarify the Jewish nature of the B’rit Hadashah (New Testament) or wanting to know more about the Jewish traditions and beliefs that are the root of Christian faith.

Hendrickson provided this Bible free for review. I was not required to give a positive review – only an honest review. My opinions are my own.