Church Bible Publishers is working on a new series with the goal to bring their covers in line with Cambridge, RL Allan, and Schuyler. This series, called the Platinum Series, has Water Buffalo for the outer cover and cowhide for the liner. It’s 100% made in the USA and it looks and feels exotic. Initially, the series will include the Note Takers (see the review) and the Turquoise (see the review). 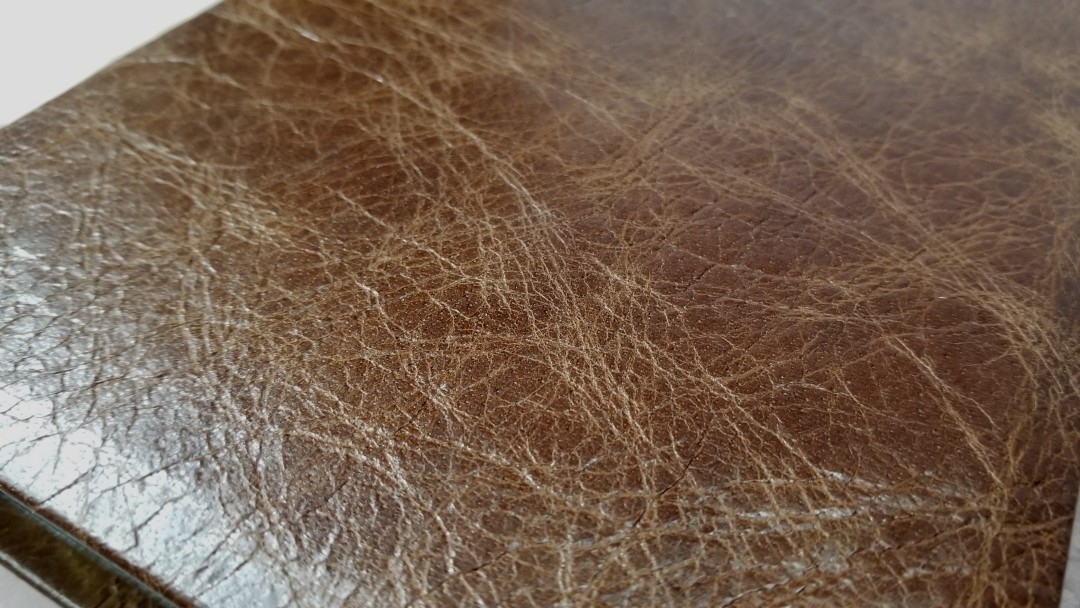 The Water Buffalo has a nice texture and grain that feels elegant to the touch, but it also looks and feels rugged. This is the kind of texture and grain that I prefer. It’s soft, but it doesn’t seem like it would scratch easy or take the impression of something that sat on top of it as a softer leather could. 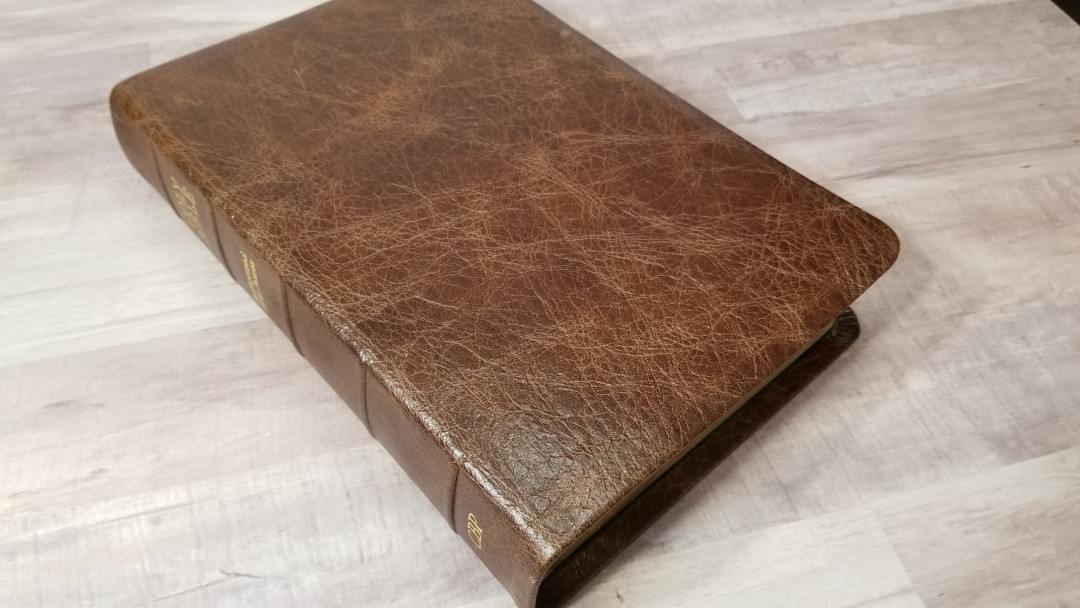 The grain has a lot of shades of brown, giving it a nice visual texture. This series doesn’t have perimeter stitching. 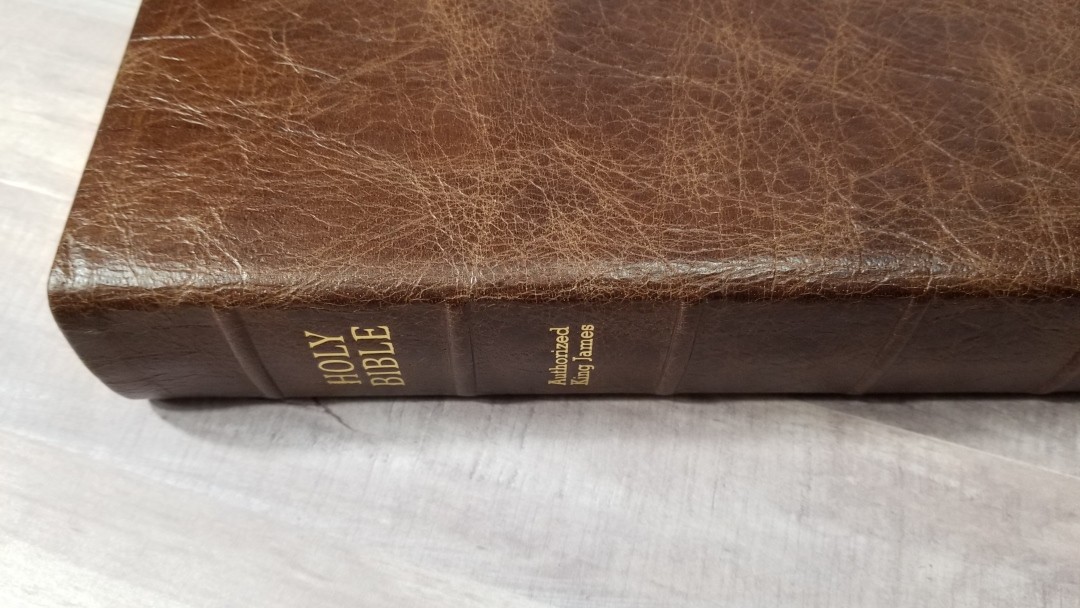 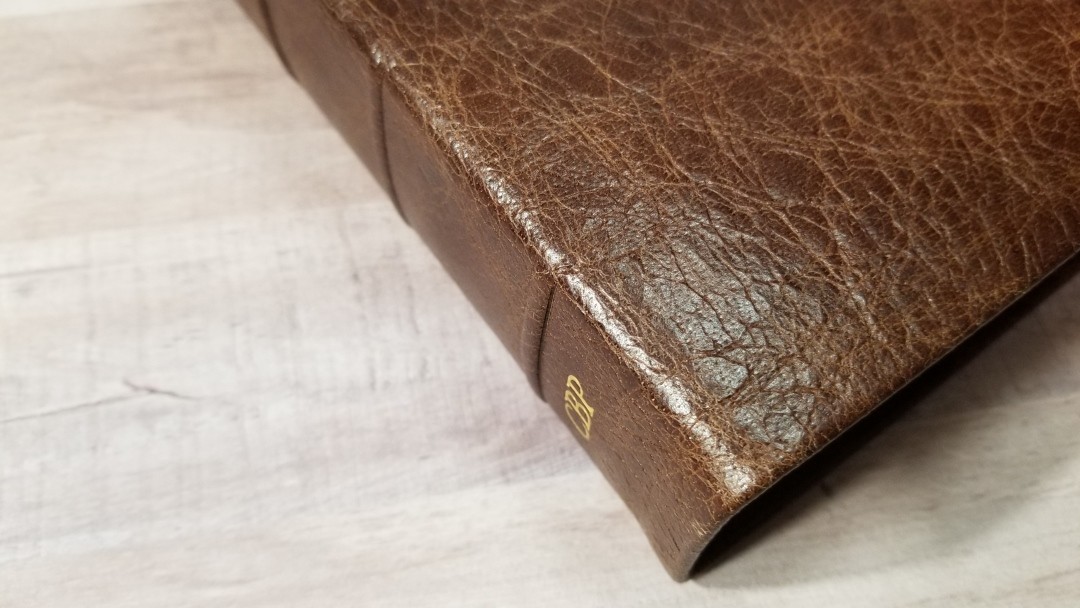 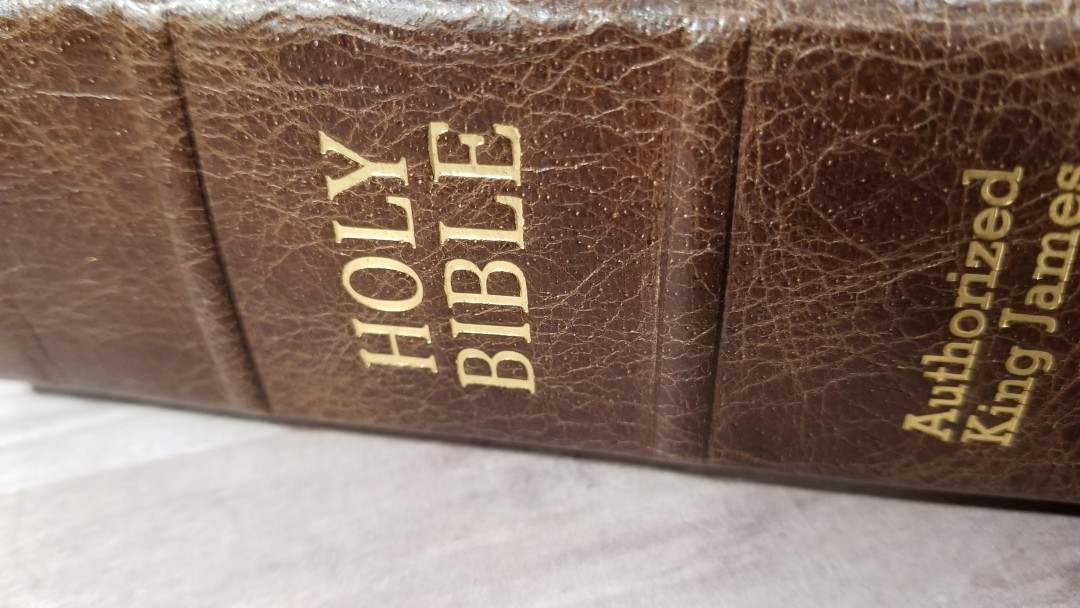 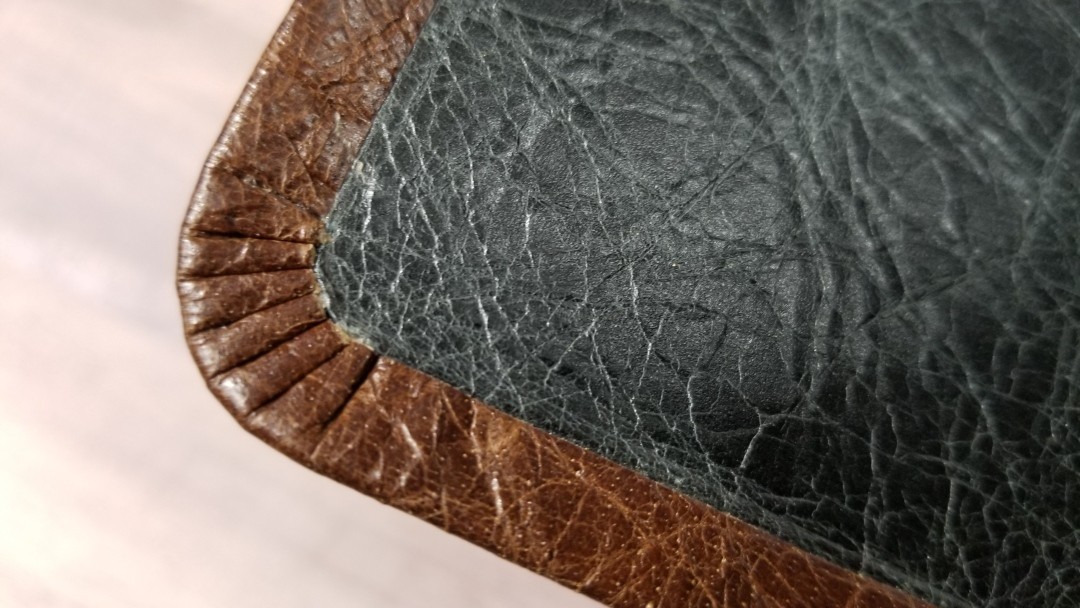 The corner work is clean on all four corners. 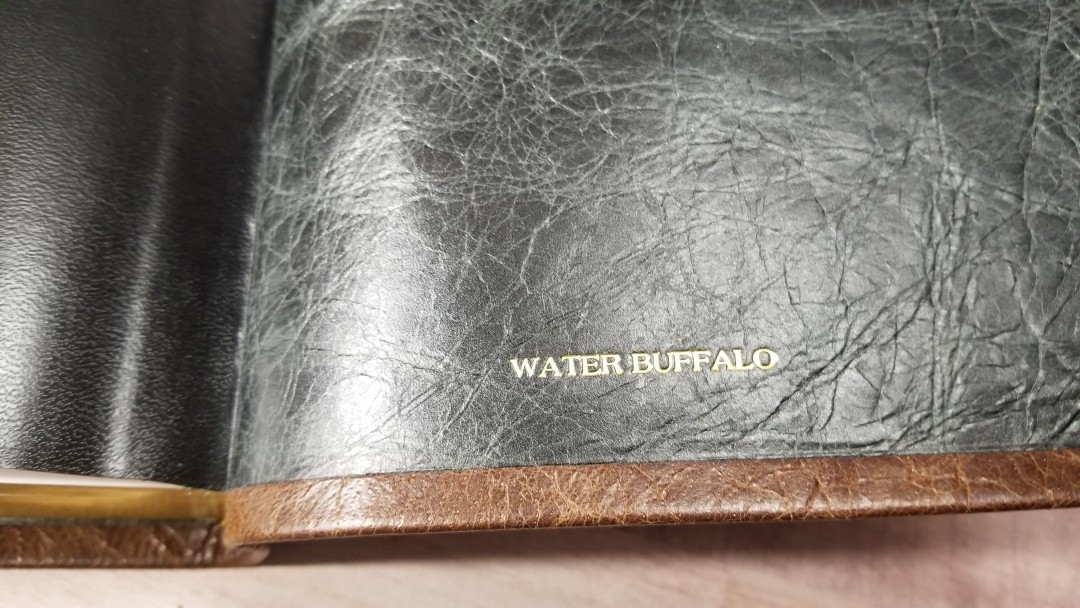 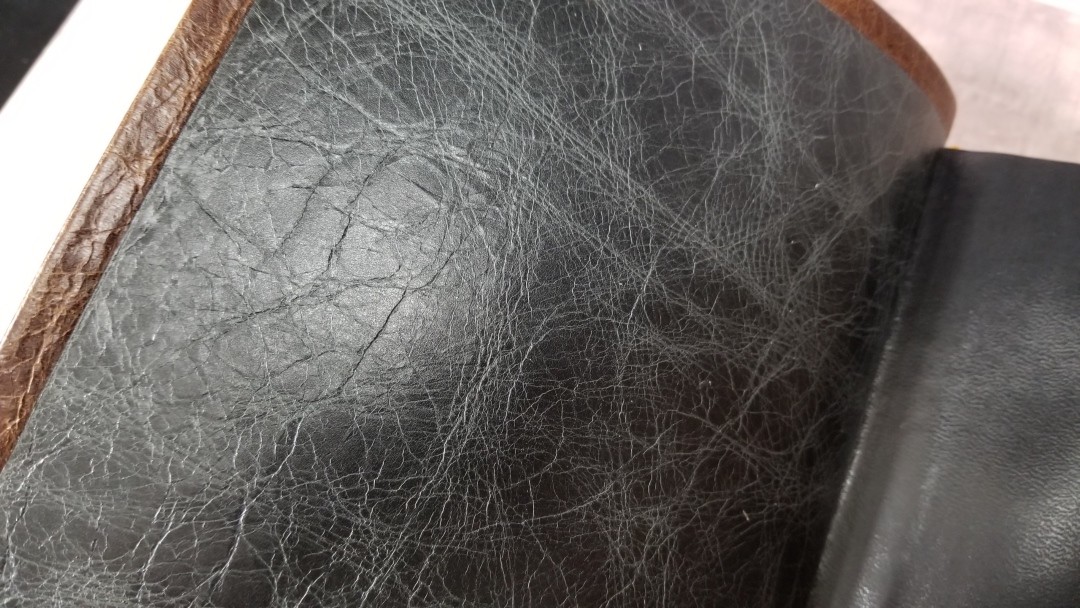 The liner is edge-lined cowhide. It also has an elegant texture that you can feel with your fingers. 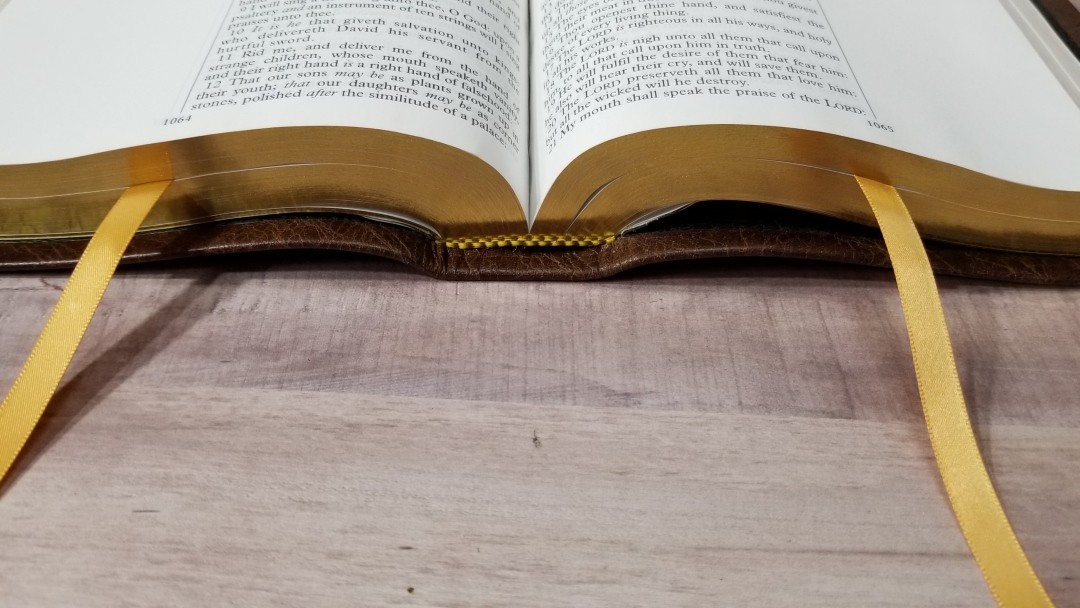 The Platinum Series will have 3/8″ ribbons and gold/brown head/tail bands. The ribbons are probably satin. They’re also more elegant than any ribbons I’ve seen from CBP. The edge-line tab doesn’t feel so stiff that it can’t stay open. It might have to break in to stay open on the first page, but I don’t think it would take long. 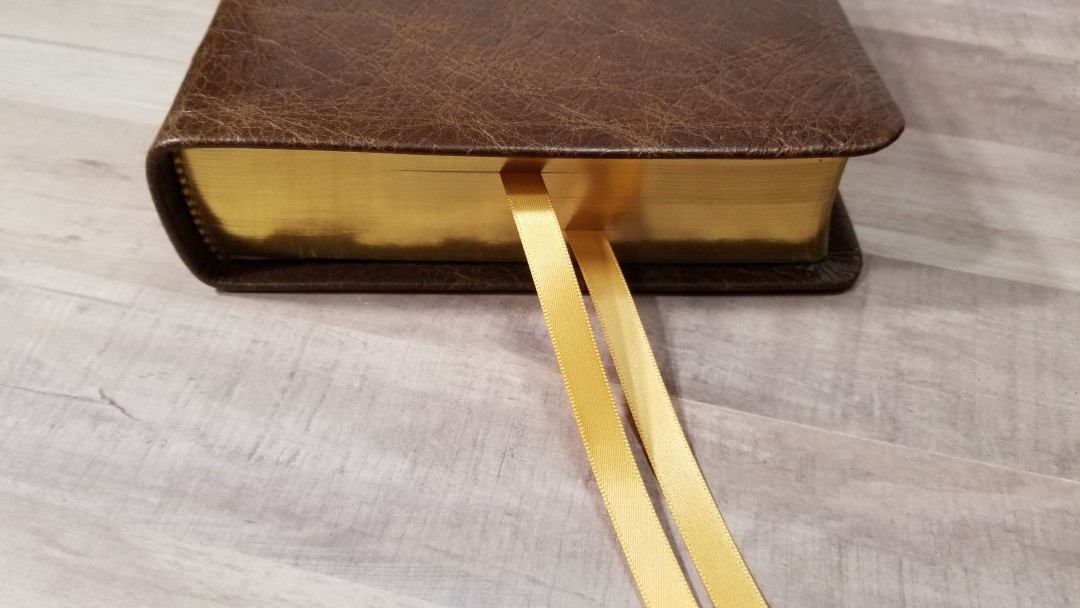 It has a 5/16″ yapp (overhang). The website shows that the series will have 3 ribbons, art-gilt edges, and a gift box.

Here’s how the Water Buffalo compares with some popular goatskin and calfskin editions. 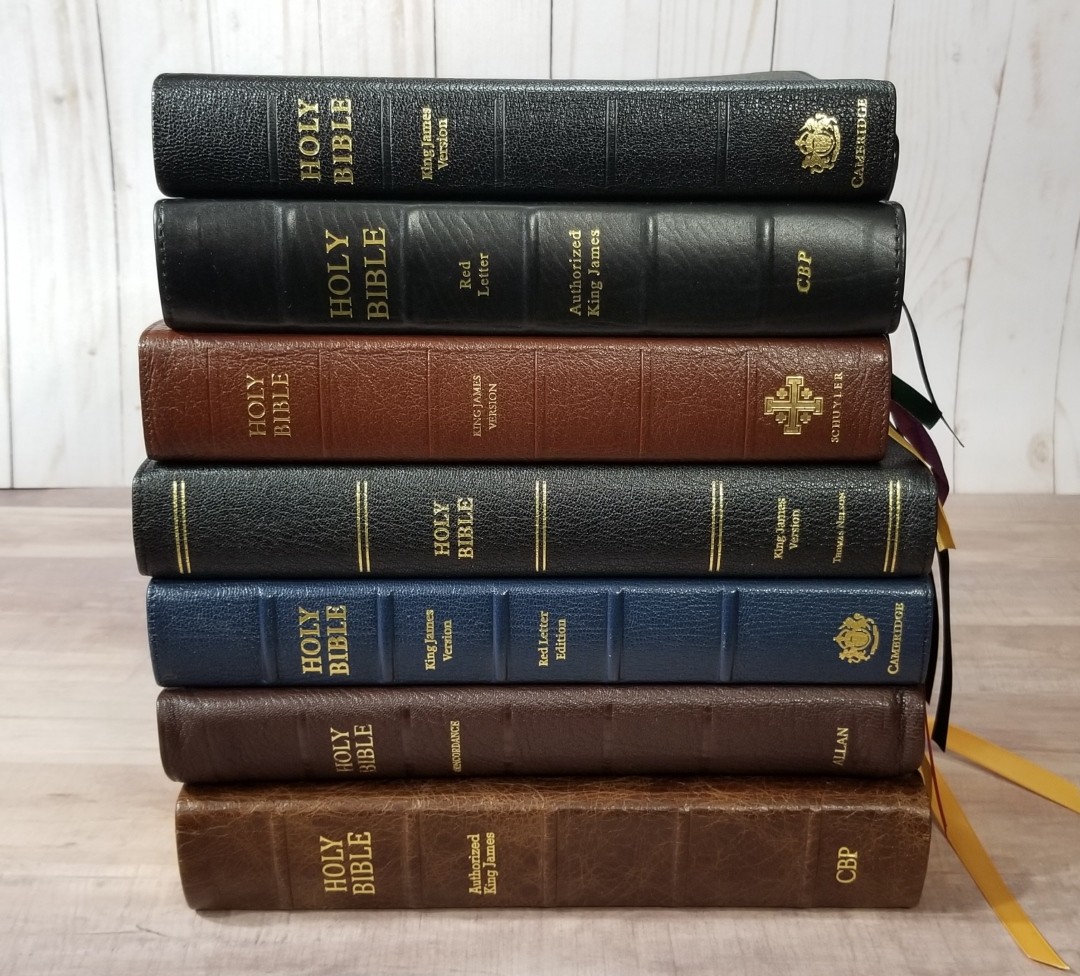 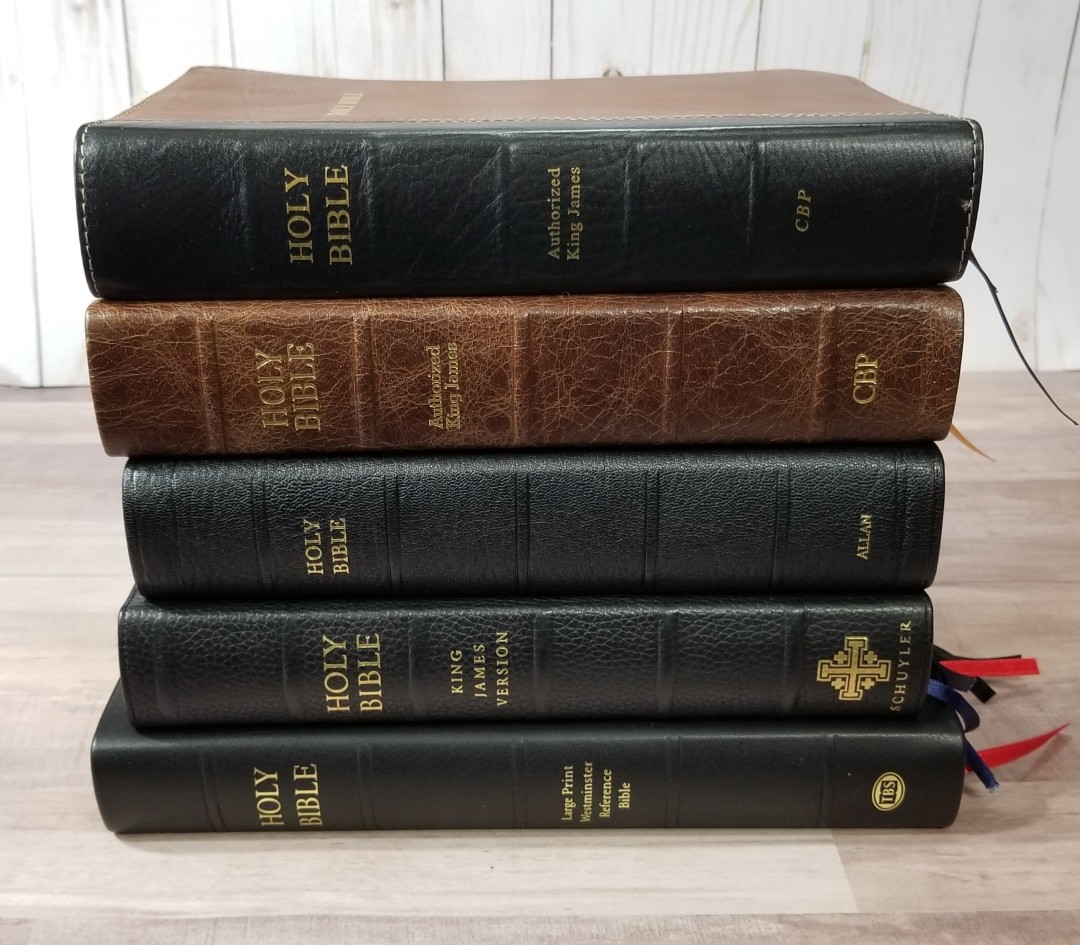 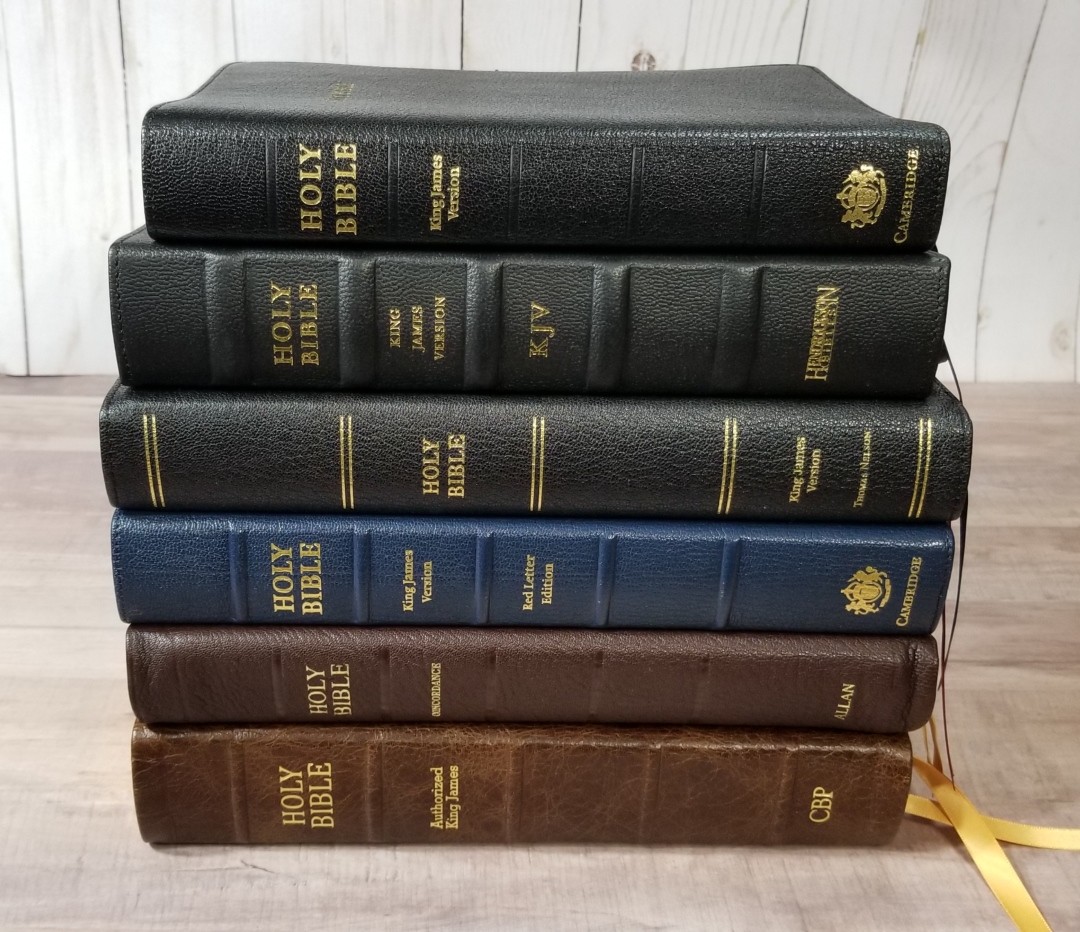 The second from the top is the goatskin Hendrickson Hallmark Reference edition. 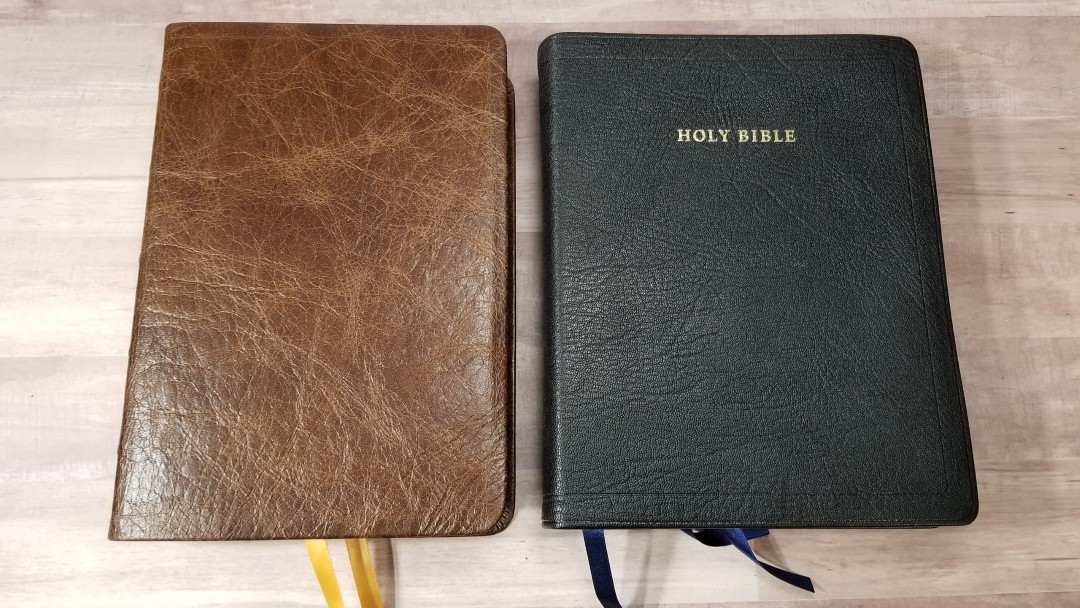 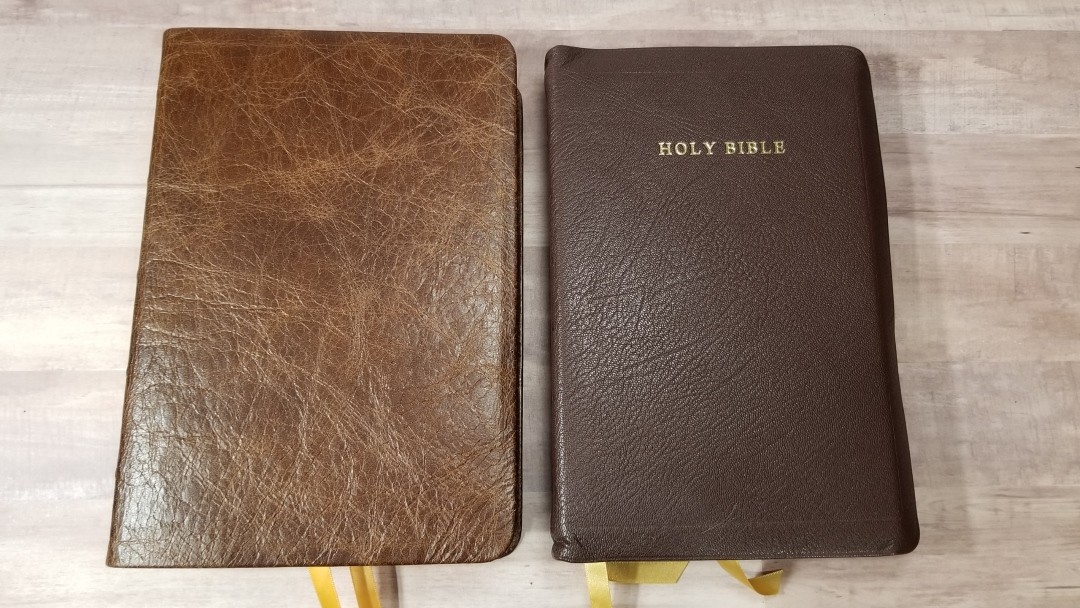 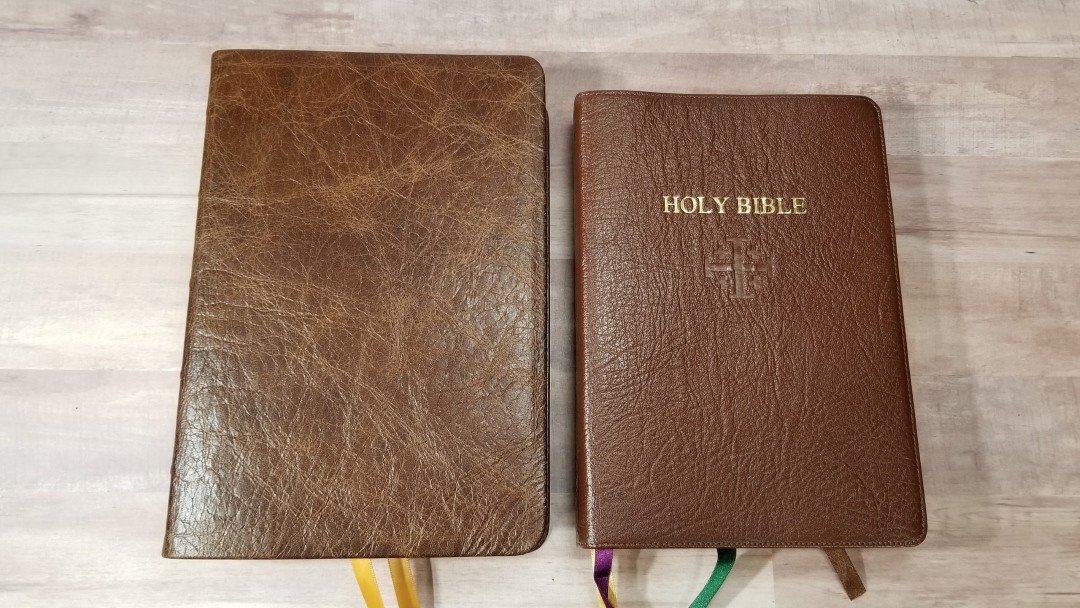 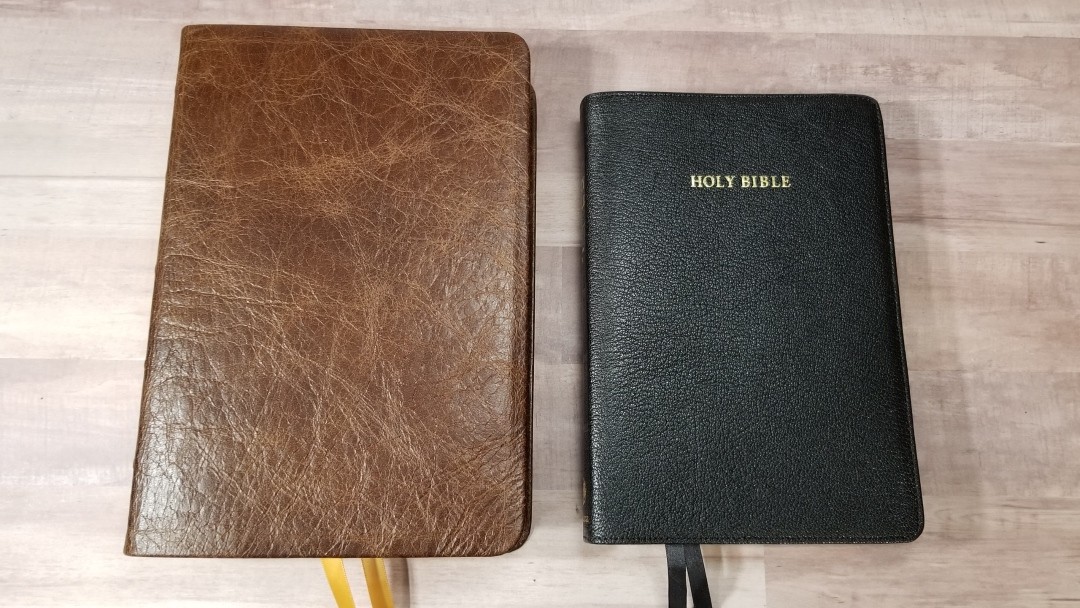 CBP Water Buffalo with the Cambridge Concord in black goatskin 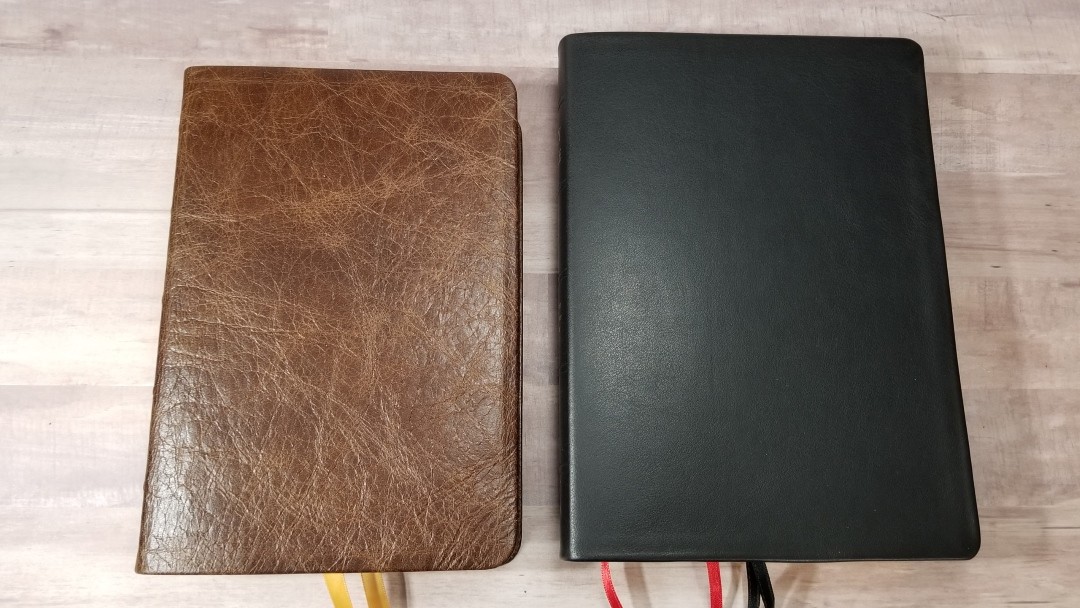 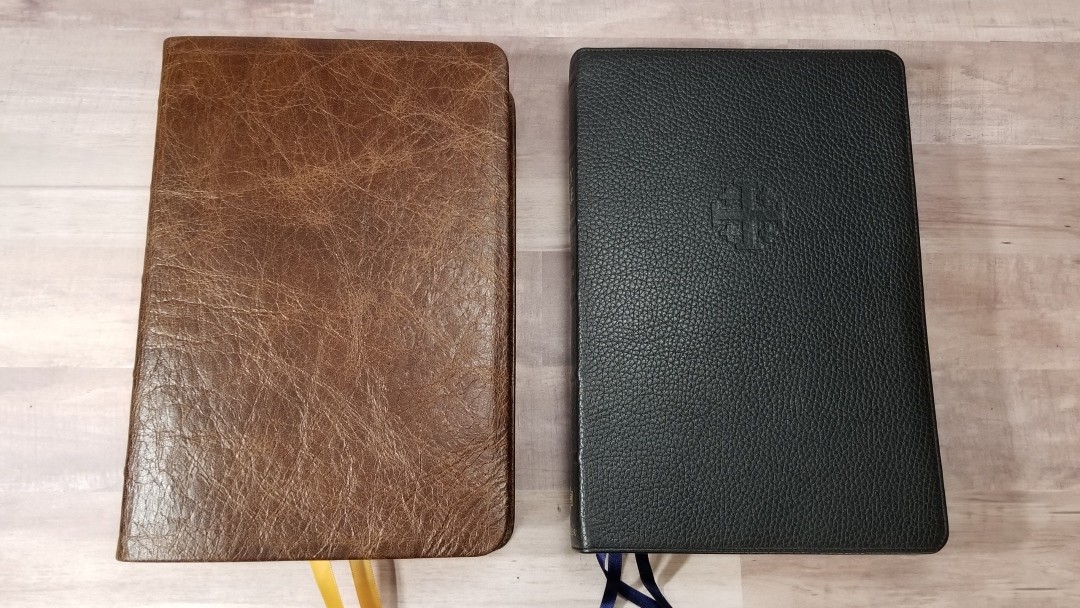 CBP Water Buffalo with the Schuyler Canterbury in black calfskin 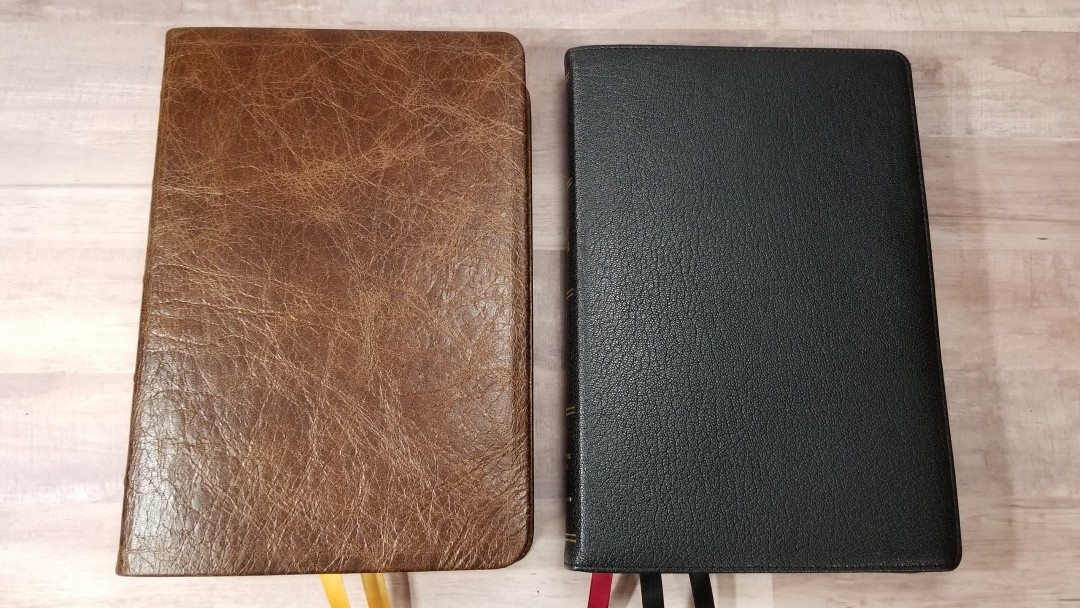 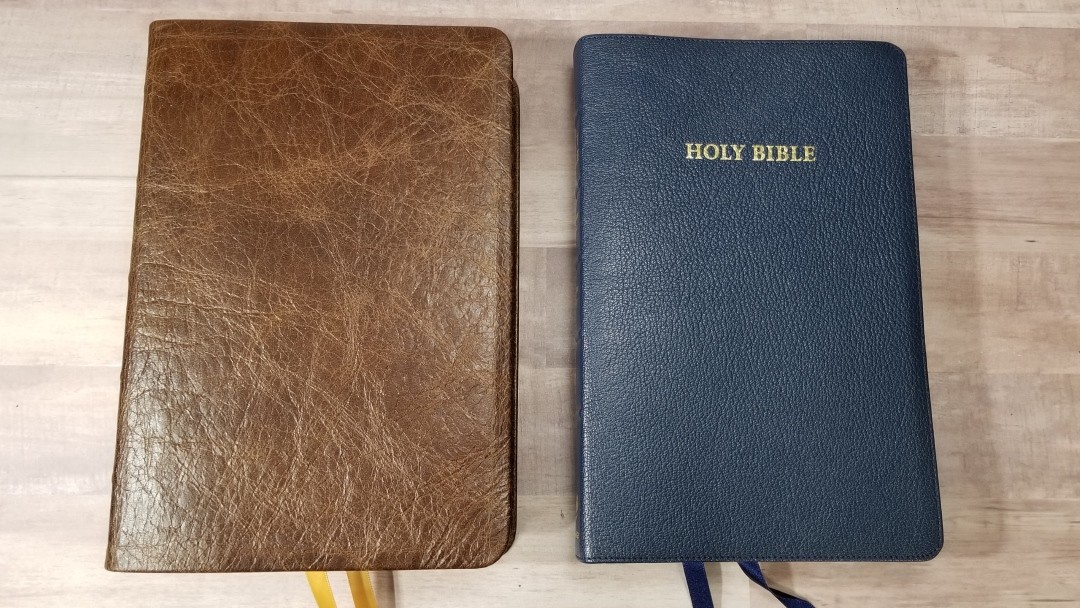 CBP Water Buffalo with the Cambridge Turquoise in blue goatskin 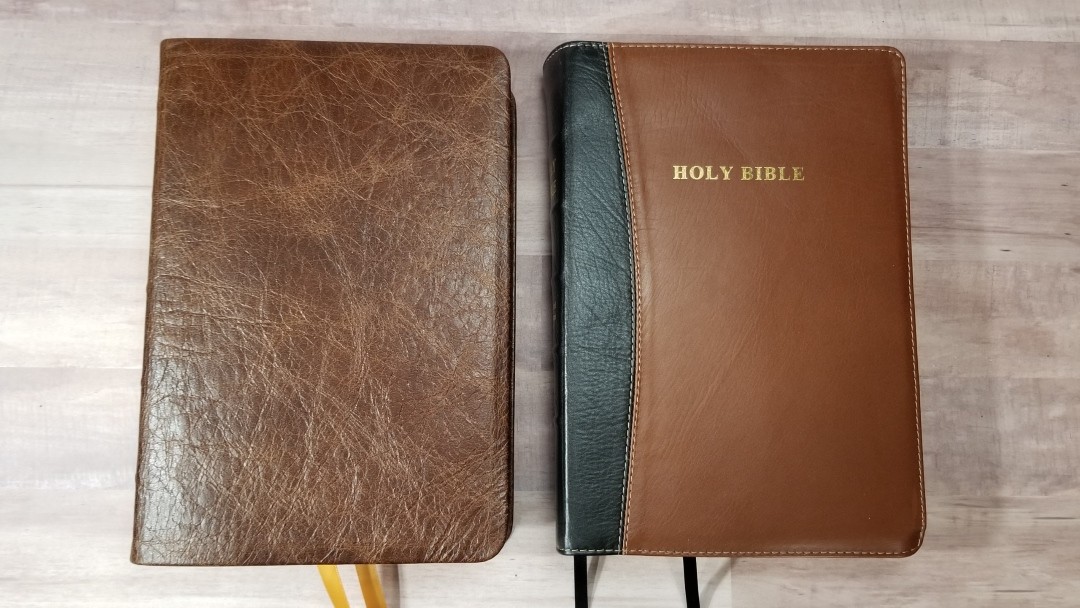 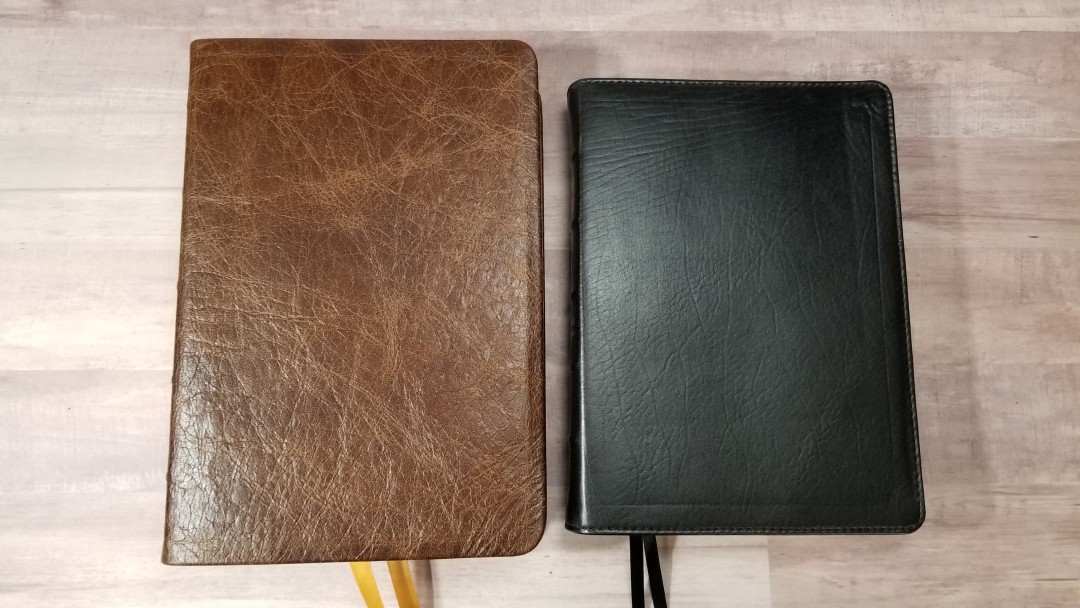 CBP Water Buffalo with the CBP 120 in black ironed calfskin

The Water Buffalo leather with cowhide liner is an amazing cover. I like it far better than anything else I’ve seen from CBP. It looks and feels like a high-quality cover. This is the kind of leather I’d expect from RL Allan, Cambridge, or Schuyler. In my opinion, CBP met their goal of producing a leather cover on par with Cambridge, RL Allan, and Schuyler’s goatskin editions.

The Platinum Series available from the Church Bible Publisher’s website, and it’s available in the red-letter editions of the Note Takers and the Turquoise for $125. I think CBP has a winner on their hands. I’m still holding onto the hope that they will update their paper (it’s good enough for general use, it just isn’t premium quality), but these small steps of higher quality leather and ribbons are bringing them closer to the full premium range.

The series is still in production, so there currently aren’t many copies available. CBP loaned me this one, so I won’t be able to do any comparisons after this round and I can only answer questions from memory. 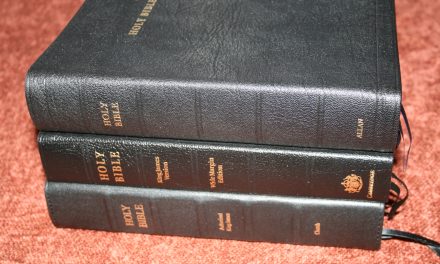