prepared by executive editor Jack Hayford, presents dynamic and extensive study tools within the New King James Version text and seeks to equip believers to build the kingdom of God through the Word. Though the label “study Bible” is not in the title, this edition of the Spirit-Filled Life Bible includes a wealth of biblical study tools in a unique format. The “Spirit-Filled” or Pentecostal and Charismatic focus has been integrated with a firm set of scholarly foundations and thorough study principles. These tools are given a presentation designed to inspire and equip the believer for practical living as well as deep biblical analysis. Hayford’s grounded approach presents a study Bible that emphasizes the continuing work of the Holy Spirit within a balanced presentation of biblical interpretation. 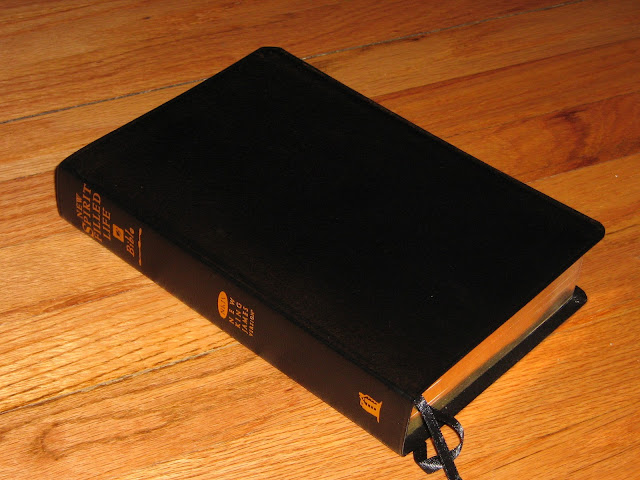 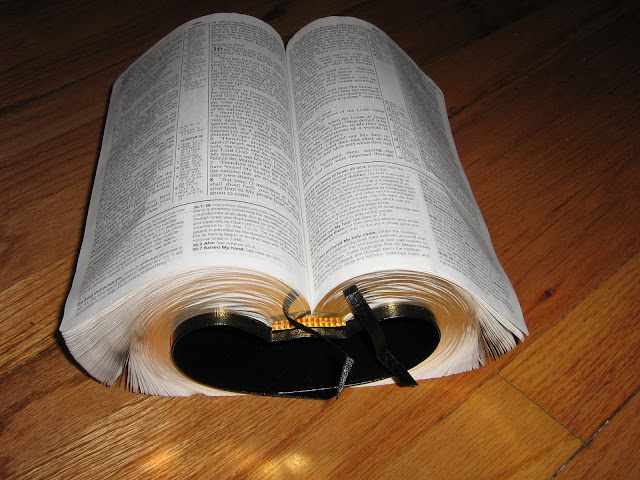 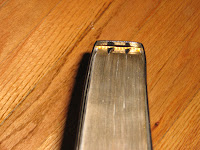 The flexibility out of the box is impressive, considering the fact that this is neither calfskin or goatskin. The spine remains very tight and stiff, which may be a sign of endurance. The binding itself is glued, not sewn, and the stiffness should give it a longer life. Glue degrades as it flexes and breaks, releasing pages, so a tight binding is a good sign with glued bindings. Glued bindings last when a Bible is subjected to light or very careful use, but normal use will probably mean that the maps section of the Bible will begin to get loose or fall out after a few years. 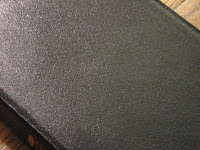 The slimness and size of the volume is impressive. The width of the spine is about one-half the size of the ESV Study Bible and is manageable within the hand. At nearly 2000 pages this Bible packs a lot of information into a small space and remains highly portable.

The grain on the genuine leather is fine and though probably stamped and simulated, gives a nice appearance to the leather. 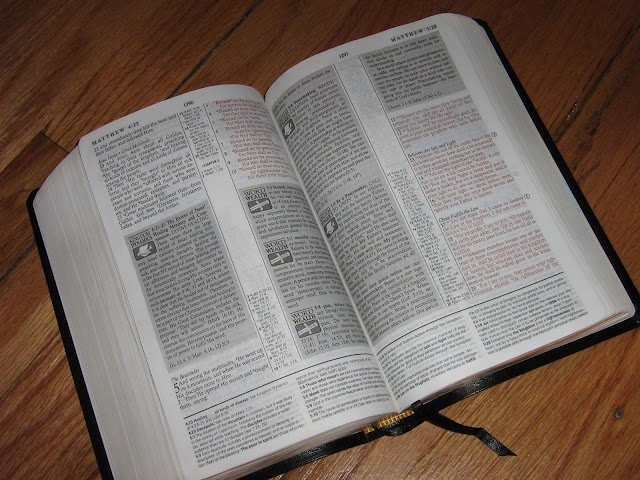 LAYOUT
The layout of the New Spirit-Filled Life Bible

is something of an anomaly, mixing symbols, notes, references and different features on the page. The nature of the notes and the various categories of information presented make the layout at times confusing to navigate and seriously hampers readability. The Kingdom Dynamics and Word Wealth notes sit in gray boxes and actually interrupt the text of the Bible. This is a grievous blow to readability and may offend some readers. The significant interruptions to the text was obviously a deliberate choice and may promote space and readability in some areas, but I struggle to see the advantages to this layout beyond placing the relevant notes as close to the verses they connect to as possible. This may improve the visibility of the notes and the reference material, but greatly reduces the prominence of the Bible text itself, making this a Bible specifically for study and probably not for simple reading.

The double column, verse per line format divided by a center column of references retains traditional sensibilities and continues to promote a reference-ready format versus a general reading layout. The font of the text is a serif 8/9 pt font, which is fairly readable but somewhat narrow compared to other fonts of the same size. The references are quite readable in a sans serif font and the study notes at the bottom have the same clear type. The paper in this edition is fairly thin, which allows for the portability and light weight of the Bible, but promotes some significant ghosting and wrinkling. 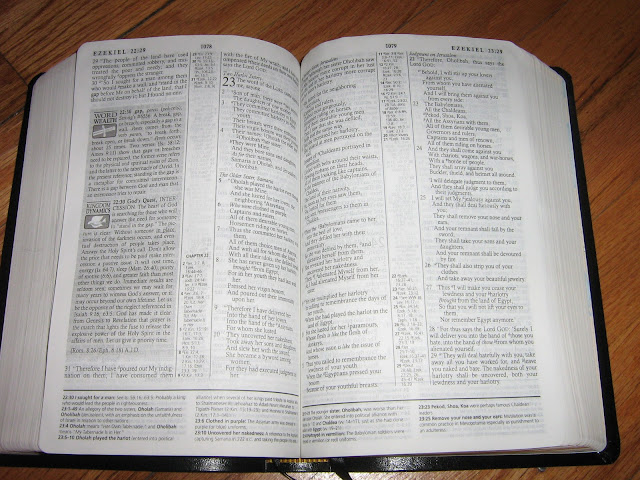 features one the most dynamic, varied and complex note schemes I’ve seen, using various features and designs to present varied information in a number of ways. At the bottom of the page are traditional study notes, which give relevant information and interpretation of various passages. The study notes tend to be pithy and relevant. They are not comprehensive but cover needed information and troublesome phrases or passages. In addition to basic information, they often present in-text maps, charts and graphs which cover ancient life, creation science and a number of other academic and informational concerns. 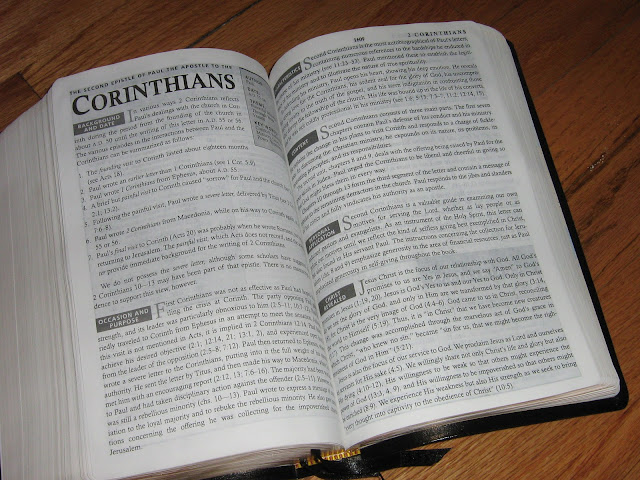 The basic notes are preceded by thorough book introductions which cover the context in which the book was written, the genre, content, application, structure and context within the work of the Holy Spirit and the revelation of Christ. These introductions vary according to each book, highlighting the unique features of each work and introducing a number of approaches to the scripture. 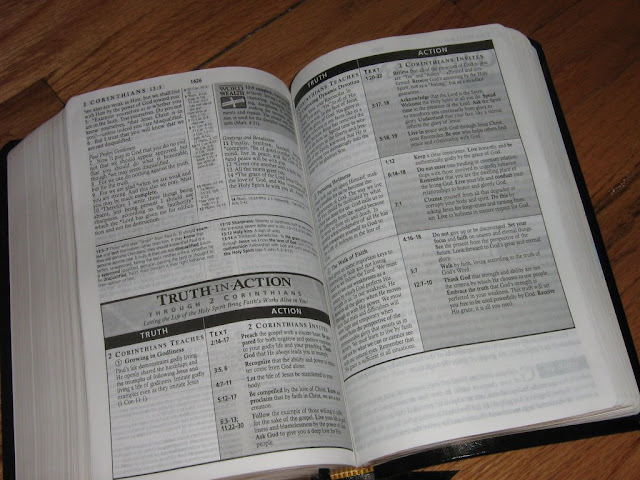 A Truth-in-Action chart follows each book tracking themes and highlighting verses which should be directly applied in a practical way within the subject. These charts tend to be topical studies narrowed down to a single book and focused on texts with a strictly direct application. 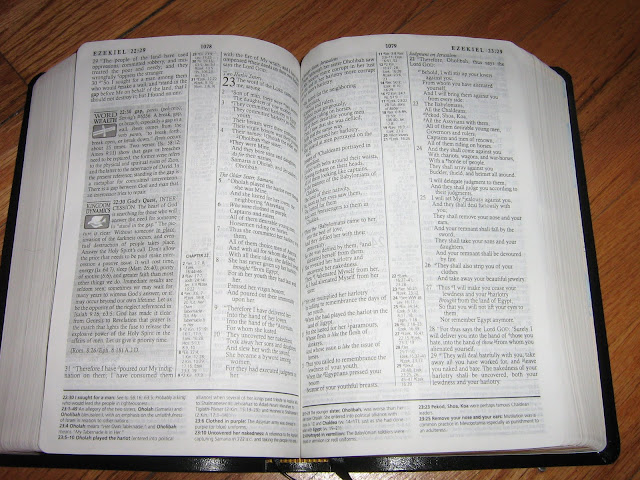 The main meat of the study notes are the WORD WEALTH and KINGDOM DYNAMICS notes, which are featured within the text of the Bible and feature direct studies focusing on words or themes.

The Word Wealth notes feature Strong’s numbers and present 550 Hebrew and Greek word studies, illuminating the meaning of the specific word across scripture and then applying it within a specific verse.

WORD WEALTH Zechariah 8:2 zealous, qanah (kah-nah); Strong’s #7065: To be zealous, filled with zeal, full of emotion; to be passionate; also to be jealous or envious; to be highly possessive of something. Qanah and its derivatives appear approximately 90 times in the OT, often in the context of the Lord’s becoming provoked to jealousy by the flirtations of His people with false gods. This is not a negative word, though, as it is the zeal of the Lord that will bring about the Messiah’s eternal reign (Is. 9:7). In the present reference, God is either zealous with burning zeal for Zion, or jealous with burning jealousy, or perhaps, fanatic over His Jerusalem. Every nation has its plans for Jerusalem; God, too, has His plans (vv. 3–15), which must overrule all human schemes.

Kingdom Dynamics notes feature studies across 41 themes, focusing on building the kingdom of God through the work of the Spirit and the spread of the gospel.

KINGDOM DYNAMICS Zechariah 8:18-23 Four Key Ingredients of Any Prayer Movement, PRAYER. In 1748, Jonathan Edwards called for “concerts of prayer” based on this passage. Edwards’s lengthy title after 18th century fashion, summarizes Zechariah’s vision for any prayer movement: “A humble attempt to promote the agreement and union of God’s People throughout the world in extraordinary prayer for a revival of religion and the advancement of God’s kingdom on earth, according to Scriptural promises and prophecies of the last time.” First, the prophet Zechariah called for a spirit of hope and urgency to prevail. The remnant was told to quit fasting and start feasting, in celebration and anticipation of how God would act on their behalf (v. 19). Second, he called for continual prayer with a correct agenda. They were to “seek the LORD” (the literal Hebrew translates “seek the face of the Lord”). Third, they were to encourage one another to join in prayer–“one city shall go to another” (v.21)–as God’s people united in the work of prayer for revival; and fourth, they were to expect an impact through their prayers, so that many would come to seek God’s manifest presence in their lives as He moved among His own (v. 23). Such developments are to be expected in any generation, as prayer movements awaken the church to seek God.
(Joel 2:12-17/Eph. 3:14-21)

Though the New Spirit-Filled Life Bible comes from predominately charismatic/pentecostal leaders and academics the notes are well-balanced, and while they emphasize the Holy Spirit, they do not over-emphasize or push the practice of spiritual gifts or popular manifestations associated with the Charismatic movement. Unlike the Fire Bible the New Spirit-Filled Life Bible does specify its own position of interpretation and presents it within the context of traditional or mainstream interpretation. In difficult passages and the book of Revelation as a whole, the notes carefully explain the differences of interpretations and present a balanced approach to the text.

Overall the notes present sound scholarship with passionate faith in the supernatural. They promote ideals of faith and experience within the pentecostal/charismatic movement, but also draw from a rich Christian tradition to reveal the work of God through the scripture as in the note on Zechariah 8:18-23 above. The solid scholarship and passionate focus on faith in God should make the study helps valuable aids and inoffensive to all but staunch cessationists. 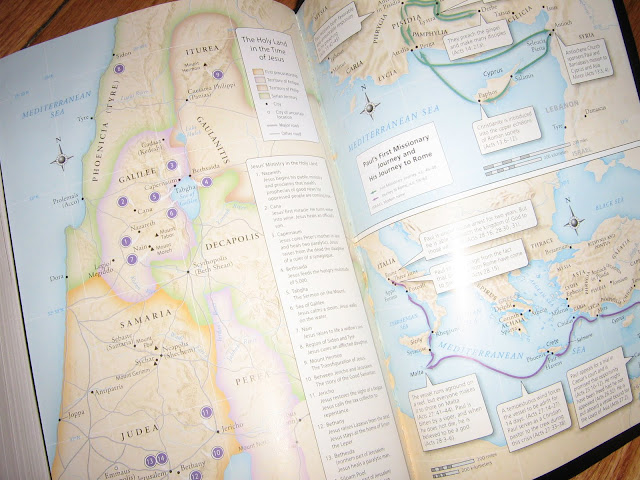 FEATURES
The Bible features eight pages of colorful maps detailing the movement of the patriarchs and the church throughout the Scripture, an impressive three column 125 page concordance and 39 pages of articles on numerous topics of discipleship, ministry and evangelism. The maps are preceded by ten pages of lined pages for notes. 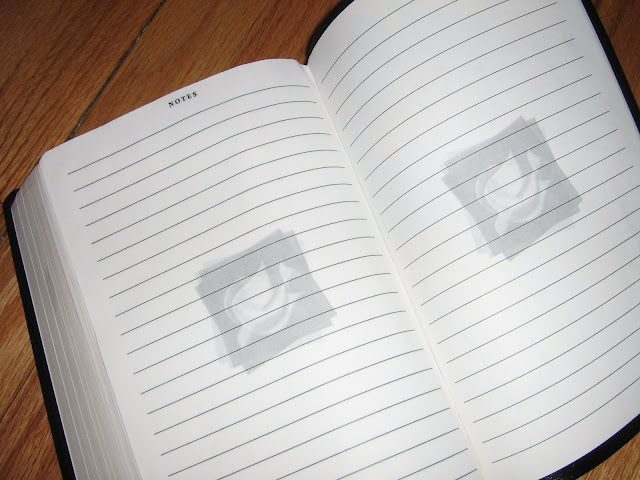 presents valuable and unique study aids in a dynamic presentation, providing a full scope of aids, helps and notes to aid in interpreting and specifically applying the Word. The binding, layout and packaging has flaws and compromises as all editions do, but the content remains the most valuable piece of any Bible. The content presented and applied within this text has great potential to equip and inspire believers from all walks and faith traditions. Jack Hayford has created a resource that has great potential for bringing solid, scriptural and faith-filled strengths from Charismatic/Pentecostal theology to the mainstream.

My thanks to Thomas Nelson for providing this complimentary review copy. I was not required to give a positive review, but an honest review. 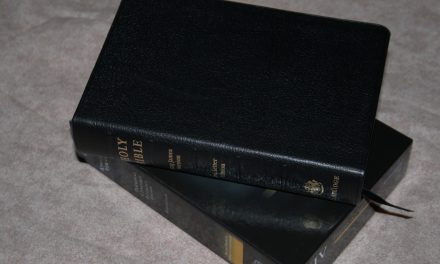 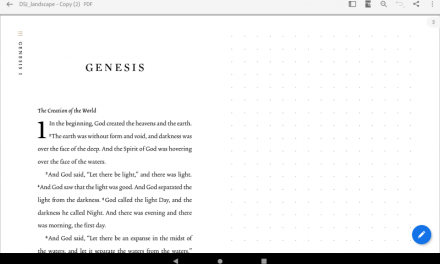