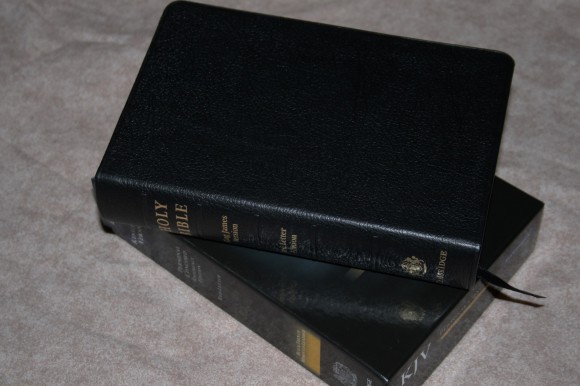 The Personal Cambridge Concord is a smaller version of one of Cambridge’s most popular KJV’s: the Concord. This one has all the tools of the regular edition, but is that a good idea in such a small package? Something that little can’t be readable or useful can it? I’ve used this Bible for about two months now, putting that very question to the test. 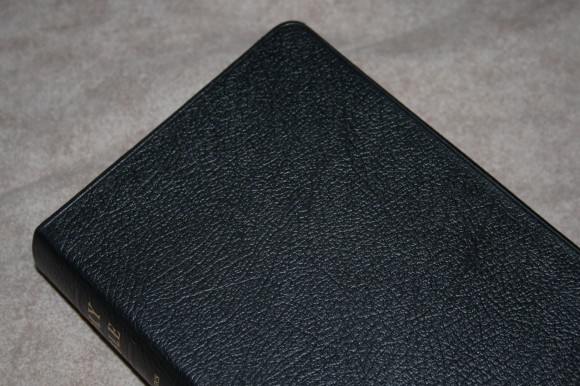 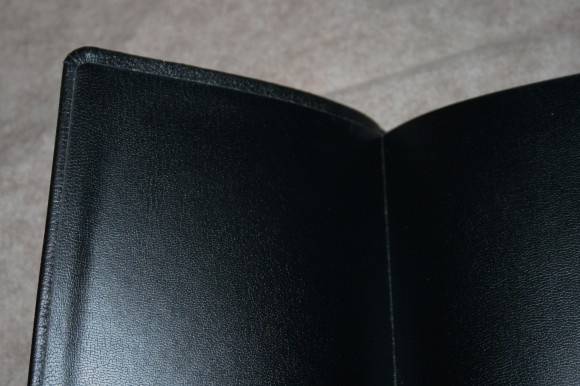 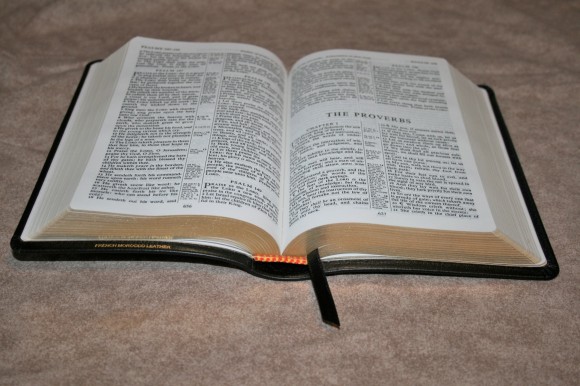 The cover is French Morocco. This is just a touch under calf-split and a higher quality that genuine leather. It has a grain that is pressed into the leather. It looks amazing. This is a very thick cover. It’s almost too stiff. It’s so stiff that it doesn’t want to lay open on its own in Genesis. It has loosened up a lot since I started using it, but it still doesn’t lay all the way open. Once it’s been open for a while it doesn’t want to close all the way. I love the way it looks and feels. I just wish it wasn’t so stiff. The liner is paste-down vinyl. It is smyth sewn. 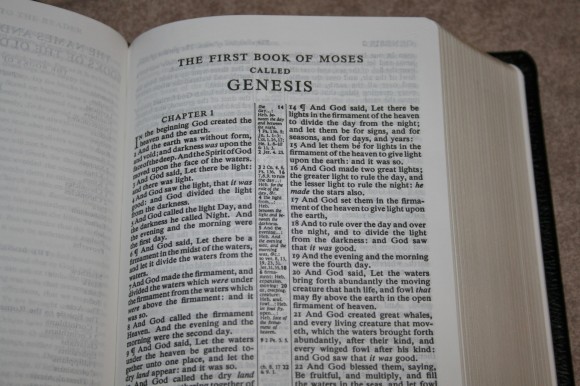 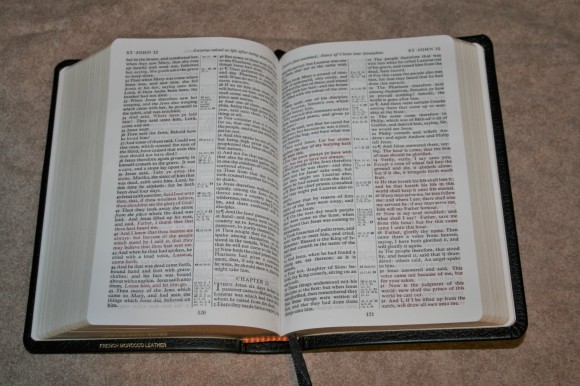 The font is a 6.5 Times Semi-bold with 7.5 leading. This font was designed to be readable in a small size. I honestly didn’t think I could read a font this size, but it’s so sharp and bold that I can read it laying in my lap easier than some fonts that are much larger. The color and opacity of the paper helps with readability. 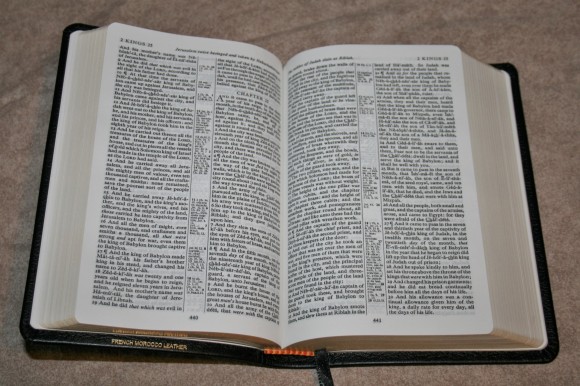 It has a self-pronouncing text with a guide in the front on how to use it. I like this feature. It isn’t overdone. It just has the really hard words. This is handy when reading out loud and you want to make sure you get it right.

The print quality isn’t as consistent as the regular Concord (the regular edition is printed by Jongbloed). Not that it’s that bad, but the variation is just noticeable. It’s still better than most Bibles out there. It ranges from dark to medium dark. The red is more noticeable than the black. I like this red better than most reds – especially the darker red. The columns are 1 11/16 (almost 1 3/4”) wide and contain 36 characters. Even when the words are a little tighter than normal it’s still readable with no issues at all. 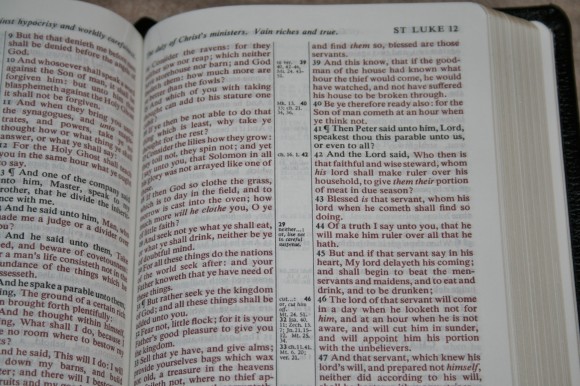 The top of the page shows the book names and chapter numbers for everything that appears on that page, and a summery for the page. The summaries range from 1-3 statements. I find this handy for doing quick scans when I’m looking for something. Sometimes I just look at them to see what catches my eye.

The Concord has an interesting center-column system for its references and notes called the Bold-Figure Reference System. They appear next to the verse they reference. I like this because I don’t have to look up and down the center-column to find them. 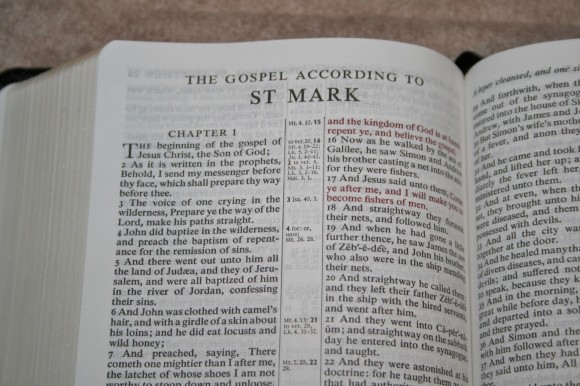 Instead of having any keys in the text, there is a bold verse number on the side of the column where the verse is. The references and notes appear under that number. This keeps the text extremely clean and readable. Some don’t like this because it’s difficult to know which reference and note goes with which portion of the verse. I like it because I don’t use references and notes that often anyway. I would rather have a clean text with no distractions. 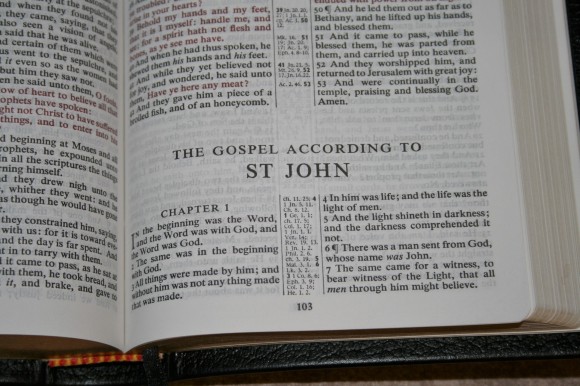 There are a lot of references. I’m not sure of the count but I think it’s less than 100,000. I think it’s the 80,000 that the TBS Westminster uses as its starting point. Here are some quick counts:

All of these verses are found in the concordance, but if there’s room next to the verses then I prefer the references to be there where I need them. I have been able to find pretty much anything I wanted, but not from references alone. With that said, I do like the references in the Concord. It’s just that there could be a few more. 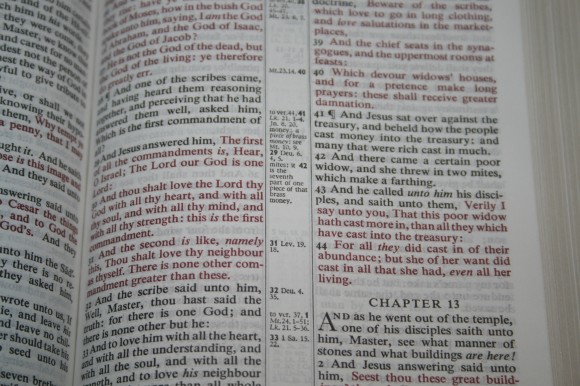 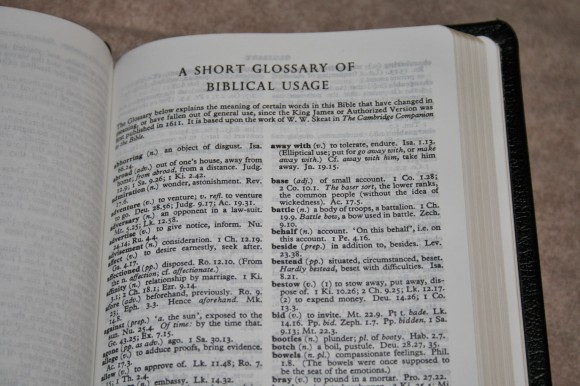 There is a 7 page glossary for words that have changed meanings or are no longer in use today. It’s based on The Cambridge Companion to the Bible by W. W. Skeet. It gives the word, the part of speech, the definition, and verses where it can be found. I love having this feature. It’s one of the things that makes the Concord stand out to me.

The only problem is you don’t always know to look. For example, I thought I knew what the word prevent meant, but the glossary shows that in the KJV it means to go before (pre event). There’s no reason to look for that in the glossary. There needs to be some kind of marking in the center column. Maybe it should just have a note that contains the word and something like glos. The note might look like this: prevent: glos. 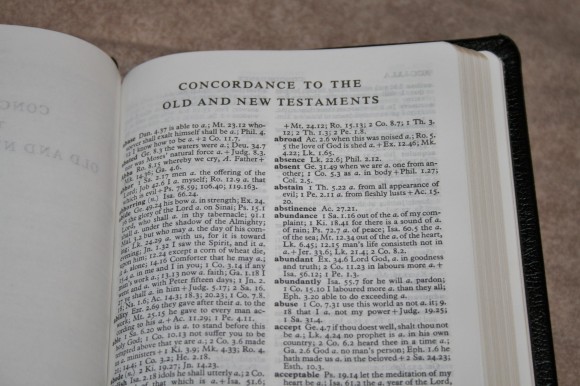 The concordance is 137 pages. It has a lot of entries and is one of the better concordances. I’m not a fan of the layout and it can be a little difficult to use. Rather than having one verse per line, the verses are ran together. This isn’t a bid deal for words that only have a few entries, but when there are a lot of entries it can be very confusing. Also, the order of verses can be confusing. You might find an entry in Acts, then 1 Corinthians, and the next one might be John. It goes back and forth between giving the reference and then the snippet of the verse and then the snippet and the reference.

Here some of the entry counts (if I counted right):

It is a good concordance simply by the number of entries it contains. However, if I can find a verse another way I will avoid the concordance. It’s just too difficult to read and use. Which is better? A concordance with less in it but easier to use, or a concordance with a lot in it that’s difficult to use? If I really needed to use a concordance I want more entries over ease of use. It will take me longer to find what I’m looking for but I’m more likely to find it. 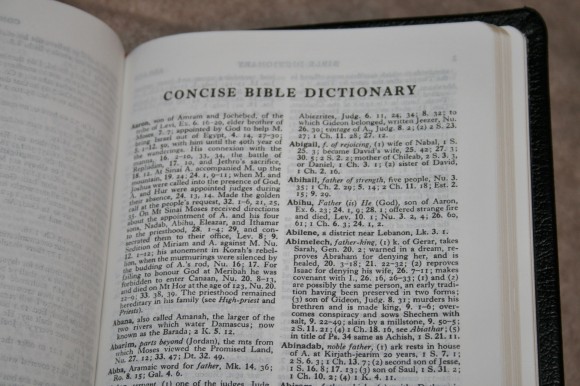 It has a 128 page dictionary with two different sections: one for words and one for book summaries. This is one of my favorite features of the Concord and in my opinion puts it in a league of its own. I’m glad it was included in the personal sized edition. There’s a lot of good material here for study, sermon and class prep, etc. For example, the entry for Christ has so many references that I can’t count them and shows the topics. Here’s the gist of what it says: 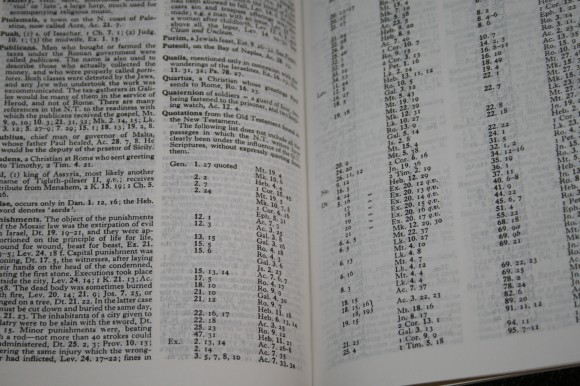 It also has the Harmony of the Gospels, chronological tables, OT quotes in the NT, and lots more. It’s rare if I want to look up something in the dictionary and it’s not here. It includes peoples, places, events, etc. There is some theological bias but it isn’t much. Like always, do your own study when it comes to theological issues. 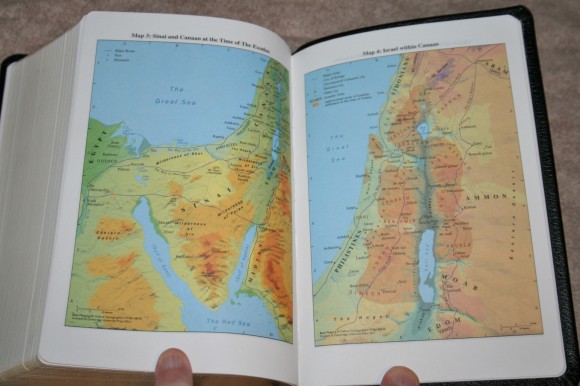 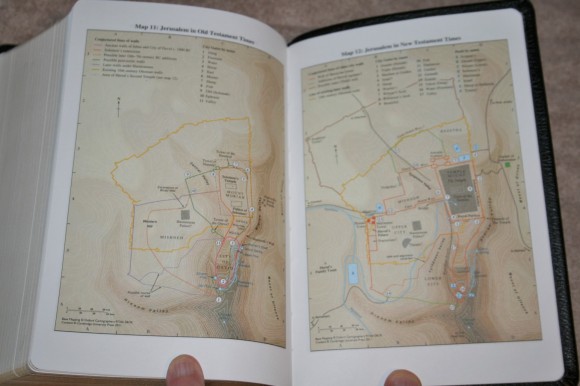 There are 15 maps with an 8 page color-coded index. Maps include:

The maps are very colorful and extremely detailed. They’re labeled well and everything is easy to read. 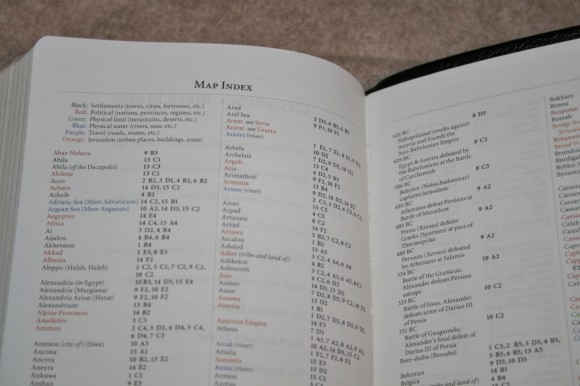 The index is color-coded to make it easier to find what you’re looking for. The colors include:

I’m glad the index is included. I’d like to see this to be a standard in Bible publishing.

The size of this Bible is 5 x 7.25 x 1.5. It’s a good size for carry, but still too large to go in a pocket. The text-block is thicker than the regular Concord. I’d like to see it have the same thickness. I carried it pretty much everywhere. I had no problem carrying it and reading it in the car.

For preaching I prefer a larger text. When I did read from it I stood closer to the Bible than I normally do, but the small text didn’t really give me any problems. I did have to hold it open. That was the only real complaint about using it for preaching.

I have a friend that’s always telling me how awesome his Personal Concord is and he’s right. I can see needing something with a larger font if your eyes are tired (in that case I highly recommend the regular Concord), but this small font is easier to read than many fonts that are larger. The sharpness and boldness, together with the opaque paper, make a great reading Bible with no distractions in the text. The extras, such as the glossary and dictionary, are icing on the cake. I highly recommend the Personal Concord for anyone that needs a smaller Bible for carry but still wants the tools that the Concord offers. It’s a good Bible for students, anyone in the ministry, and as a regular everyday carry Bible.

Comparing it to the Regular Concord 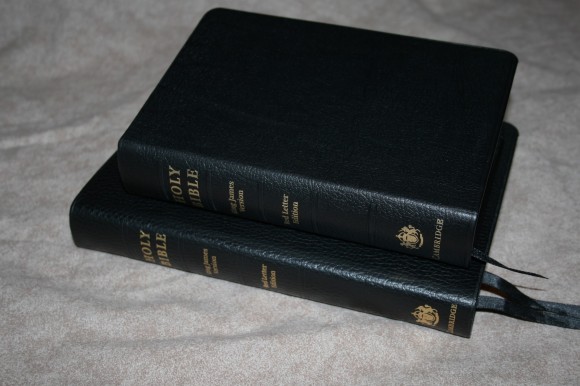 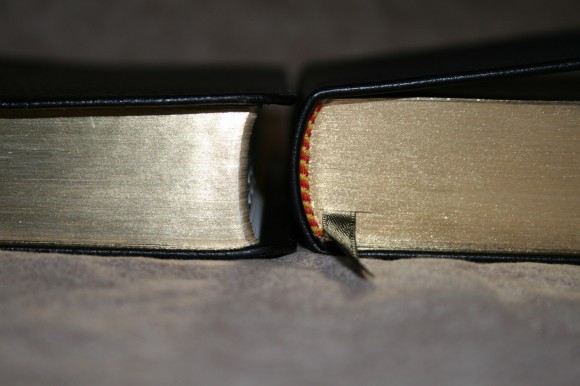 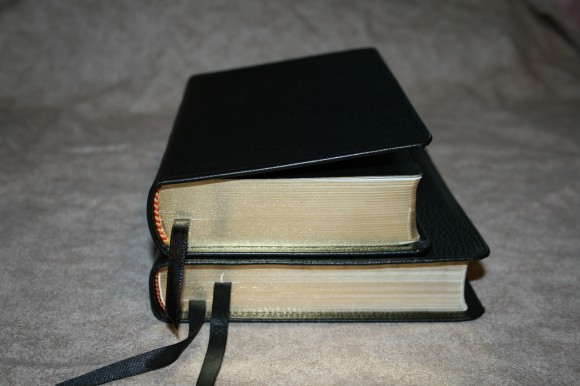 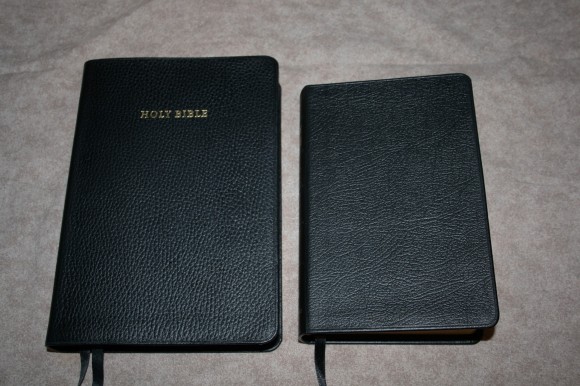 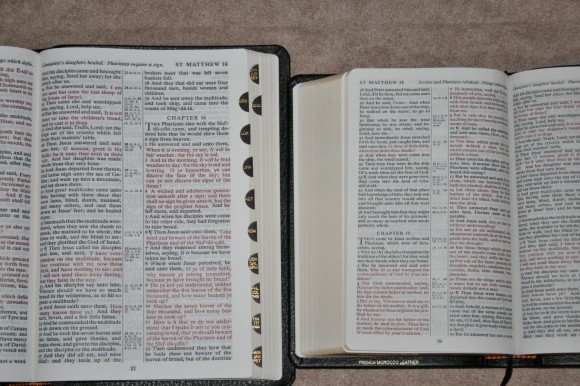 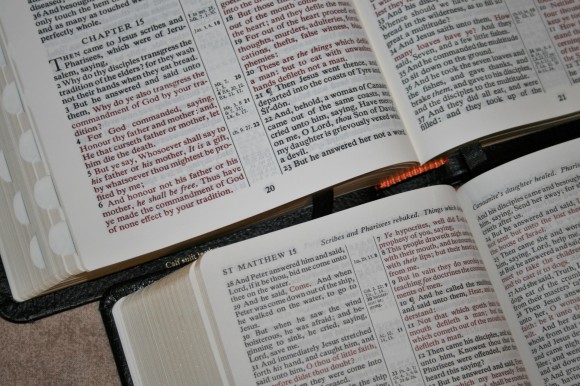 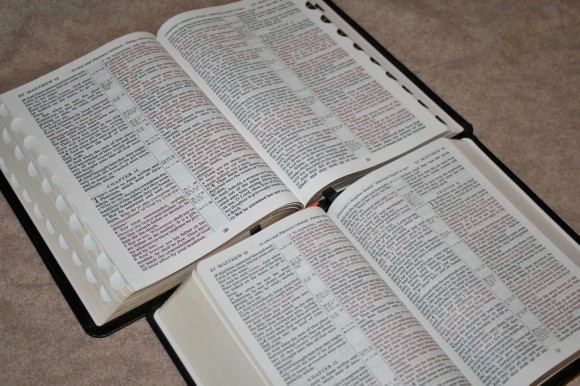 Cambridge provided this Bible free for review. I was not required to give a positive review- only an honest review. 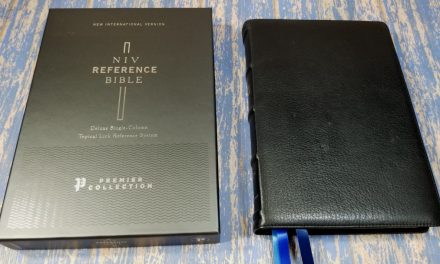